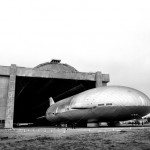 Aeroscraft ML866 and ML868 fleet manufacturer and operator Aeros today announced that Government high fidelity testing and demonstrations have been completed successfully within budget and one month ahead of schedule.

The additional testing has been taking place throughout the summer, including taxi tests of the vehicle’s unique air bearing landing system (ABLS) and revolutionary internal ballasting system – Control-Of-Static-Heaviness (COSH) , as well as testing of the vehicle’s low speed control (LSC) system. While conducting these tests, Aeros team members have also been finalizing pilot ergonomic optimization alongside flight crew training. 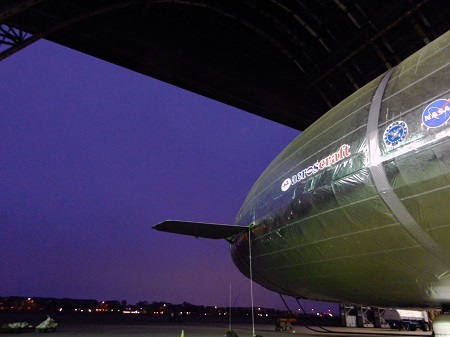 The Project Pelican demonstrator ready to move out of the Tustin Hangar.
Photo: Courtesy Aeros Corp.

“These additional high fidelity tests and demonstrations were requested by the United States government under the Pentagon’s ‘Project Pelican’ Program, which demonstrated the readiness of the Aeroscraft, a variable buoyancy air vehicle, to transition forward into initial serial production,” explains Aeros’ CEO Igor Pasternak, who continues, “Project Pelican was designed to address some of the most significant challenges facing U.S. global reach capabilities, which the Pentagon confirmed was successful in achieving its objectives earlier this year.”

“Aeros will be forever grateful to the DOD, DARPA and NASA for their support and vision during the Aeroscraft’s development, and I would also like to thank all the members of the Government-Aeros team for their professionalism and insights throughout the Pelican program,” reveals Pasternak, adding, “The successful demonstration of the Aeroscraft ‘Dragon Dream’ vehicle was only possible because of tremendous cooperation, vision and passion shared with these great partners.”

The Project Pelican demonstrator moves out of the Tustin Hangar on July 4, 2013.
Photo: Courtesy Aeros Corp.

The Aeroscraft is an innovative air vehicle developed to provide new ways of moving heavy and oversized cargo from point-of-origin to point-of-need, even to areas with damaged infrastructure or those lacking it altogether, or to move sea containers by air. It is a disruptive innovation to the current global transport logistics industry that will help balance economic development and environmental conservation. The Aeroscraft is revolutionary because of its ability to take off and land vertically like a helicopter, hover, and reach locations that have no roads or places to land.

The Aeroscraft is similar to a giant ‘flying submarine’ because of a proprietary internal buoyancy management system that compresses inert helium within to overcome traditional requirements for external ballast exchange when unloading cargo from LTA vehicles at destination. This eliminates the need for ground personnel and infrastructure and enables true VTOL flight at maximum payload, as well as new opportunities for commercial industries around the world in solving intermodal logistics and infrastructure development difficulties.

This entry was posted in Uncategorized and tagged aeroscraft, Dragon Dream, Project Pelican. Bookmark the permalink.