First Flight of the Hindenburg (LZ-129)

During the afternoon of March 4, 1936; the airship lifted off at the Zeppelin factory and cruised over Friedrichshafen and the Bodensee (Lake Constanze) for three hours.

The Hindenburg was significantly larger than its predecessor the LZ-127 – Graf Zeppelin. The volume of hydrogen it carried was approximately twice that of the LZ-127. This was achieved by lengthening the ship by 8.5 meters (3.6%) and increasing its diameter by 5.5 meters (18%). The higher diameter to length ratio was designed to increase the structural integrity of the airship, allowing it to better withstand wind forces. To be able to build the larger airship a new, larger airship hangar was built in Friedrichshafen.

The Hindenburg was powered by Daimler-Benz diesel engines rather than the Maybach engines powered by Blau gas (similar to propane gas). This made refueling at remote locations easier.

The gas cells of the Hindenburg were made by a process similar to the one developed for American airships. It consisted of a piece of cotton fabric coated on both side with gelatin and then pressed between two additional pieces of cotton fabric. Earlier Zeppelins had used gas cells made of goldbeater’s skin, the outer membrane of cattle intestines. 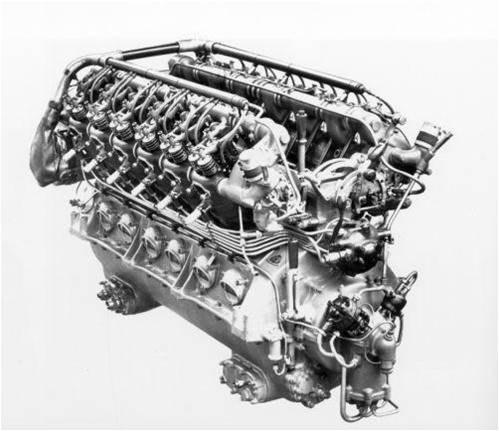 Maybach V-12 VL2 similar to the ones used on the Graf Zeppelin, USS Akron and USS Macon