On Monday, March 4, 1957, Snow Bird, a ZPG-2 airship (an N-class blimp, sn 141561) took off from NAS South Weymouth (near Boston, Massachusetts) under the command of Commander Jack R. Hunt, along with Commander Ronald W. Hoel and Lieutenant Commander Robert S. Bowser as copilots.

At that time, the record for an unrefueled, continuous flight was 200 hours and 26 minutes. The distance record was held by the LZ-127, Graf Zeppelin, which had flown 11,233 km (6,980 mi) from Friedrichshafen to NAS Kasumigaura in Tokyo in 101 hours and 49 minutes during its round-the-world flight in August of 1929. 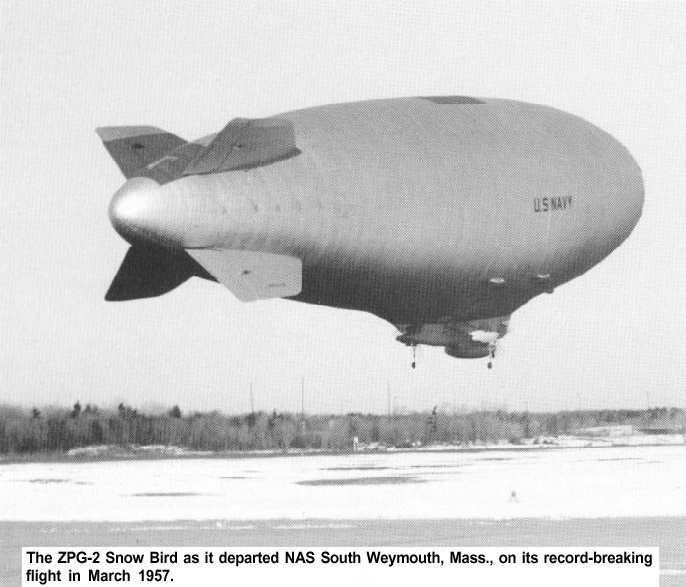 On March 15, 1957, after having flown 15,205 km (9,448 mi) in 264.2 hours (just over 10 days), the Snow Bird landed at Naval Air Station Key West, Florida. The flight had crossed the Atlantic, flown over the western shores of Africa and Europe and then crossed the Atlantic from east to west. In the process it set new records for unrefueled distance and flight time.

President Eisenhower presented Commander Hunt the Harmon International Trophy (Aeronaut category) which was awarded to him for this feat. He also received the Lighter-Than-Air Society’s Annual Achievement Award for 1957.