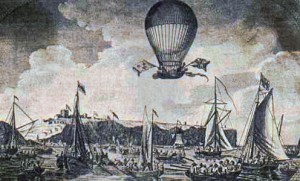 Jean Pierre François Blanchard was born July 4, 1753 in Petit Andelys, France. He began inventing a variety of interesting devices as a young boy, including a rat trap with a pistol, a velocipede, and later a hydraulic pump system that raised water 400 feet (122 meters) from the Seine River to the Chateau Gaillard. He also attempted to develop a manually powered airplane and helicopter but was unsuccessful.

Blanchard was best known for his many pioneering balloon flights. He took up ballooning following the Montgolfier brothers’ 1783 demonstrations of hot-air-balloon flying in Annonay, France. Blanchard made his first successful ascent in a balloon he built himself on March 2, 1784. On January 7, 1785, Blanchard and Dr. John Jeffries, an American physician, made the first flight over the English Channel, traveling from Dover, England, to Calais, France. In the same year, Blanchard gave the first successful demonstration of the use of a parachute when a basket containing a small animal was dropped from a balloon and parachuted to earth, foreshadowing later parachute descents of Andre Garnerin. Blanchard later tried parachute jumping himself. He also tried unsuccessfully to use sails to add maneuverability and facilitate propulsion in balloons.

On January 9, 1793, Blanchard made the first balloon ascent in North America. That day, he ascended from the Washington Prison Yard in Philadelphia, Pennsylvania, and landed in Gloucester County, New Jersey. Carrying the first airmail letter, this flight was observed by President George Washington. After that flight, Blanchard returned to Europe and, with his wife, Marie, who had also learned to fly balloons, performed many other exhibitions. In addition to his balloon flights in France and the United States, Blanchard is also credited with the first balloon flights in Germany, Belgium, Poland, and the Netherlands.

In February 1808, Blanchard suffered a heart attack on a flight over The Hague in the Netherlands and fell more than 50 feet. He never recovered from the fall and died on March 7, 1809.