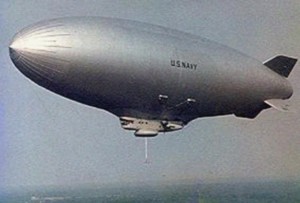 Lakehurst Naval Station in New Jersey became home of the Airship Early Warning (AEW) Squadron 1 (ZW-1). The squadron originally used ZPG-2 blimps (343 ft. long, 75.4 ft. in diameter, with a capacity of 975,000 cu. ft. It sported “X” tail and control surfaces. The tricycle landing gear was electrically controlled and the nose gear could be raised 40° degrees to allow for mast mounted movement. In 1956 additional radar was added, and the airships were designated as ZPG-2W, They became the core of AEW’s Squadron 1 (ZW-1). The ZPG-2W’s height-finder radar was located on top of the envelope. It was reached through an inside shaft equipped with a ladder. The last -2W’s were equipped with a low frequency radar antenna installed inside the envelope. The antenna was 33 ft. wide and 8 ft. tall. 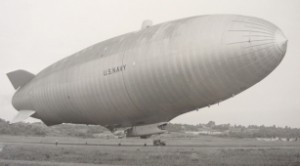 In 1958 the ZW-1 Squadron received four ZPG-3W’s. These airships were specifically designed for AEW. At 403 ft. length and 85 ft. diameter they were the largest non-rigid airship ever constructed. The volume varied between 1,509,000 and 1,544,000 cu. ft. They were equipped with a 40 foot rotating radar antenna inside the envelope and a height finder radar dome mounted on top.

The on-station endurance capabilities of the four ZPG-3Ws delivered to ZW-1 compared favorably to five USAF Super Constellations in rotation. While on station the -3W’s could retrieve a floating bag of fuel which had been dropped for them. On October 31, 1961, ZW-1 Squadron was decommissioned as it was considered incompatible with the carrier-based Navy.

Click this link: Largest Blimp ZPG-3W Launched to see a 1950’s newsreel of the launch of a ZPG-3W blimp in Akron, Ohio