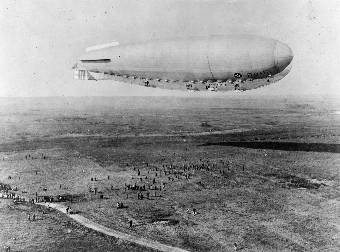 In 1920 the Army Air Service purchased a 410-foot long semi-rigid dirigible, the Roma, from Italy. Disassembled and shipped to the United States, the reassembled airship made its first flight in America from Langley Field, Va., on Nov. 15, 1921. 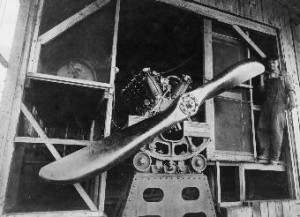 Ansaldo Engine One of the Roma's Ansaldo engines on a test block. (U.S. Air Force photo)

The first flight test with the Roma’s new engines took place on Feb. 21, 1922. With 45 officers, enlisted men and civilians onboard, the Roma flew across Hampton Roads at about 55 mph. While about 600 feet over Norfolk, Va., the control box at the rear of the airship broke and forced the Roma downward. The nose buckled, the disabled airship hit some high-voltage wires, and its hydrogen gas exploded. Thirty-four men died in the crash. Investigators could not determine the cause of the accident, but it was generally thought that the Liberty engines had been too powerful for the Roma. 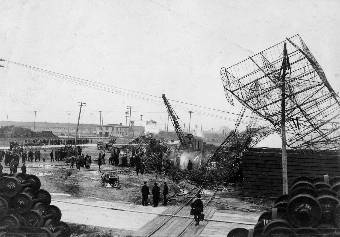 Roma Tragedy - Spectators watch as a crane removes the twisted metal of the crashed Roma. Note how the steering assembly remained caught in a telephone pole on the right. (U.S. Air Force photo)

America’s major technological contribution to World War I was the “Liberty” aircraft engine. It was light, powerful and efficient. America’s auto industry turned out 20,478 of them for the war. The Liberty engine continued in military and civilian use even into World War II. 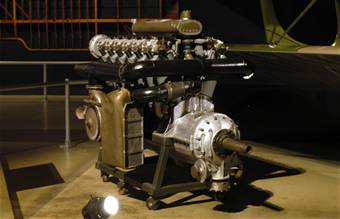 This 12-cylinder, liquid-cooled 443-hp Liberty 12-B demonstrates the Army Air Service engineers’ quest for higher flight and more efficient power. Its turbo supercharger allowed aircraft to reach great heights by compressing the thin air at high altitudes to preserve engine power. A turbo supercharger uses engine exhaust to power an air compressor, which in turn feeds dense, oxygen-rich air to the engine. A sturdy circular arrangement of reduction gears on this particular engine (called “epicyclic” gears, in the round silver case around the propeller shaft) allowed the propeller to turn at variable speeds for better performance. This method of changing the propeller’s thrust by shifting gears eventually gave way to adjusting the angle or pitch of the propeller blades instead.

These kinds of experimental refinements were carried out at McCook Field and Wright Field, the Army Air Service’s testing facilities near Dayton, Ohio. The tests led to greater knowledge and better aircraft in the 1920s and 1930s and paved the way for developing the superior aircraft the Allies would need in the Second World War. 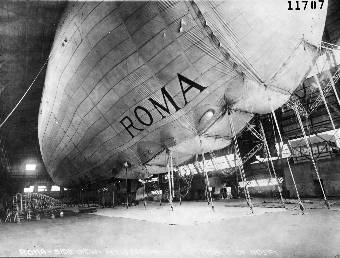 Roma Airship A semi-rigid airship, the Roma used hydrogen for lift, and a metal keel supported the bag. This photograph shows the metal keel being assembled. Afterward, the metal framework was covered with cloth, giving the Roma its characteristic fin along the bottom. The writing on the photo says “Roma - side view - Keel assembly - Assembly of nose”. (U.S. Air Force photo)

Roma Gas Bag Filled with Air Normally filled with hydrogen gas, the Roma's gas bag was filled with air to allow workmen to repair any leaks. The writing on the photo says “Roma – Inspection and repair of gas compartment #1”. (U.S. Air Force photo) 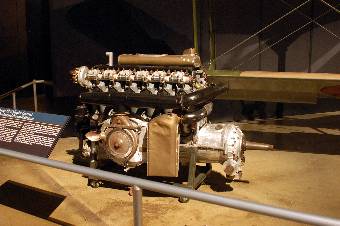 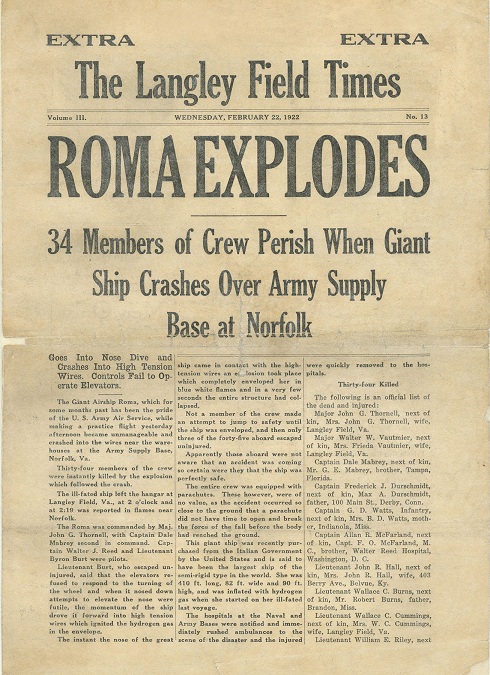 This page from The Langley Field Times has news about the Roma disaster. (U.S. Air Force photo)