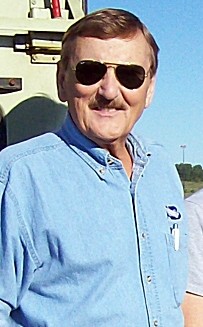 Tom’s Interest in flying began when he served in the USAF Reserves at Youngstown Air Force base while attending classes at Youngstown State University. After being hired by Goodyear he transferred to March Air Force Base in Riverside CA as an aircraft mechanic.

In August of 1963, Tom started his LTA career in Akron as member of the newly commissioned airship Columbia’s ground crew, transferring to California with the airship shortly thereafter. A year and half later he was selected as a pilot in training. His career with Goodyear continued with Tom becoming Senior Pilot, Manager of Airship Operations and culminating as Director of Airship Operations and Planning. After retiring from Goodyear, his LTA career continued with the Lightship Group (Quality & Assurance) and Airship Management Services (as contract pilot of the Fuji blimp). Tom has also been a member of the Lighter-Than-Air Society’s Board of Trustees.

Tom is a member of Our Lady of Victory Church in Tallmadge, where he is involved with the pastoral care mission at hospitals and home. He serves on the Board of Directors of Violet’s Cupboard, Summa Pastoral Council, and is a Dominican Associate @Our Lady of the Elms. Tom is also a member of the Boy Scouts of America’s Order of the Arrow.

Tom is most proud of his wife Sarah, sons Thomas and James, daughter-in-law Nicki and granddaughters Taylor and Nicole.