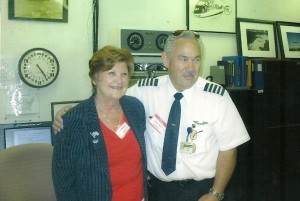 As a young boy, Jim Maloney Jr. always wanted follow in his father’s footsteps, to fly the Goodyear blimp. Jim Sr. was with Goodyear Airship Operations for four decades. While still in high school in Miami, Florida, Jim worked during the weekends as a member of the Goodyear blimp ground crew in Miami. Jim continued to work on the ground crew while he was a student at the Miami Dade Community College in Florida and later at the University of Southern California where he pursued dual degrees in Electrical engineering and Computer Sciences. He obtained his BS, MS, and PhD E.E. from USC.

Jim got his pilot’s certification in fixed wing, multi-engine and flew such aircraft as the Smithsonian Institute’s Grumman Albatross. In 1983 he got his “Goodyear wings” and realized his lifelong ambition of becoming a blimp pilot. After accumulating thousands of hours at the helm of the Goodyear blimp, becoming Pilot-in-Charge and subsequently Manager of Global Airship Operations, Jim retired in 2008.

Currently Jim and his wife Sally reside in North Canton, where he is a professor at the Stark State College teaching electrical engineering, electronics, and fuel cell technology.