Posted on July 15, 2013 by LighterThanAirSociety 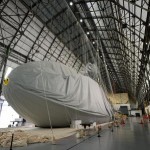 Now with more pictures (see the end of the story for a link to a photo gallery).

Construction project for faster, larger airship moves ahead with installation of envelope over rigid internal framework

Goodyear, the best-known tire company in North America, is hard at work on the construction of its newest airship. 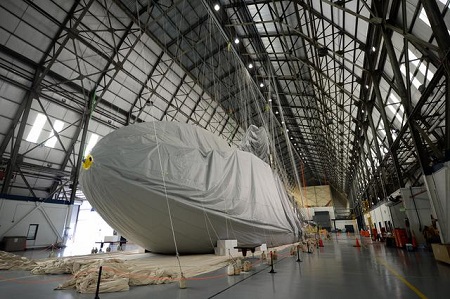 This week marks an important milestone in the company’s plans to replace its current fleet of blimps as workers install an envelope over the aluminum and carbon fiber framework of the first of its new-design airships. The airships are supplied by German zeppelin manufacturer ZLT Zeppelin Luftschifftechnik and being built with Zeppelin and Goodyear teams at Goodyear’s hangar in nearby Suffield.

Compared to the current fleet of Goodyear blimps, the new airship models will be longer, faster and more maneuverable. The envelope being applied to the new airship is made of polyester with a DuPont™ Tedlar® film. As it is stretched over each metal truss, the envelope is attached. When complete, the helium-filled envelope will have a volume of 297,527 cubic feet.

“This is a major project that requires the dedication and skilled handiwork of these combined teams of airship experts. The result will be the only Zeppelin model airship in North America. It represents a strong investment in Goodyear’s airship program, helping to ensure that Goodyear will remain at the forefront of aerial broadcast coverage and support,” said Nancy Ray, Goodyear’s director of Global Airship Operations. 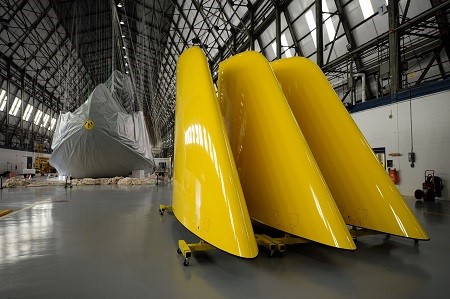 Giant tail fins await in the foreground as the envelope is installed over the framework of the newest Goodyear Blimp, being assembled this summer at Goodyear’s Wingfoot Lake Hangar in Suffield, Ohio.
(PRNewsFoto/The Goodyear Tire & Rubber Company)

Upcoming construction milestones, according to Ray, include the attachment of the airship’s tail fins and passenger gondola –scheduled to happen this year. In early 2014, key steps will be the crew training, airship certification, installation of the electronic video boards and eventual christening.

Goodyear’s blimp fleet generates significant value for the company through visibility at major events, on-camera exposure during television broadcast, tire sales through support of Goodyear dealer and store promotions, and the goodwill generated by support of non-profit and public service programs.

During its long operational history, Goodyear has built and operated more than 300 lighter-than-air vehicles since 1917, including two large rigid airships – the U.S.S. Macon and U.S.S. Akron. This is the first semi-rigid airship to be built in the 95-year history of the Wingfoot Lake Hangar.

For more than 87 years, the Goodyear blimps have appeared at the most watched news, entertainment and sporting events around the world. The blimps also heavily support local and national charities, and community emergency response programs.

Click here to view a gallery of photos published by different news outlets.

View an Akron Beacon Journal video about the progress of the new airships.

This entry was posted in Uncategorized and tagged goodyear, zeppelin. Bookmark the permalink.