Posted on October 17, 2014 by LighterThanAirSociety 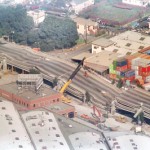 Goodyear’s Columbia blimp was floating above Candlestick Park, preparing to provide ABC with aerial coverage of Game 3 of the World Series between the San Francisco Giants and Oakland A’s, when a 6.9 magnitude earthquake hit the area. Broadcaster Al Michaels said, “I’ll tell you what: We’re having an earth—.” At that moment, the network’s live feed was momentarily lost. Generators kicked on, and with the microwave link to the blimp above intact, the coverage turned into an around-the-clock newscast in which the airship played a key role. 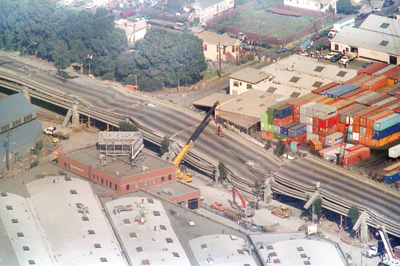 Columbia, in the Bay Area for the World Series, provided shots of the 1989 quake.
Photo by: Getty Images

“I think the blimp actually saved lives that day,” said Curt Gowdy Jr., now with SportsNet New York but who back then was in charge of ABC’s World Series coverage along with director Craig Janoff. “It was the only thing that was flying after the earthquake struck, and it provided dramatic pictures of downtown San Francisco and the Bay Bridge and the 880 overpass. We put our news hats on and spent days in the truck covering what was not a sporting event, but a news story. [Goodyear’s] Mickey Wittman was front and center with his cameramen and his crew, providing the world compelling pictures.”