Posted on October 28, 2015 by LighterThanAirSociety 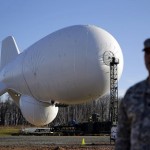 A giant surveillance “blimp” that had been tethered to a mooring at an Army installation in Maryland is now loose and drifting over Pennsylvania.

In a statement, the North American Aeropsace Defense Command said the Joint Land Attack Cruise Missile Defense Elevated Netted Sensor System or JLENS aerostat had detached from its mooring a little after noon on Wednesday.

Two F-16 fighter jets from Atlantic City were dispatched to monitor the blimp, which is “holding at approximately 16,000 feet.” 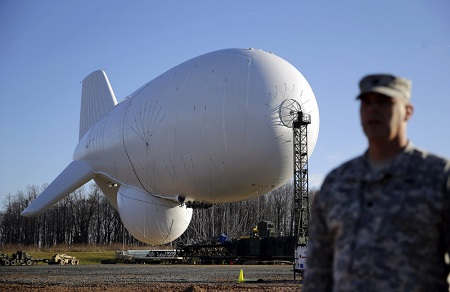 “NORAD officials are working closely with the FAA to ensure air traffic safety, as well as with our other interagency partners to address the safe recovery of the aerostat,” the agency said in the statement.

The aerostat, as the airship is technically known because it is tethered, has been the subject of much talk in Maryland. As The Intercept reported back in December, the blimps were birthed from an 18-year-long, $2.8 billion Army project. They were deployed in the United States at the end of the year.

“… These lighter-than-air vehicles will hover at a height of 10,000 feet just off Interstate 95, about 45 miles northeast of Washington, D.C., and about 20 miles from Baltimore. That means they can watch what’s happening from North Carolina to Boston, or an area the size of Texas.

“At one point, there were supposed to be nearly three dozen blimps. But after a series of operational failures and massive cost overruns, the program was dramatically scaled back to the two existing prototypes that the Army plans to keep flying continuously above the Aberdeen Proving Ground for three years, except for maintenance and foul weather.”

According to Raytheon, the maker, the helium airship can fly for 30 days at a time and can “detect and track objects like missiles, and manned and unmanned aircraft from up to 340 miles away.”

The North American Aerospace Defense Command (NORAD) informed that the runaway aerostat had landed in Montour County in Pennsylvania at 4:00 pm, approximately. During its flight the aerostat was dragging its tether cable, causing numerous power outages as it hit power lines along the way.