Airship Autopsy – Before the Hindenburg, there was the Shenandoah

Posted on October 20, 2015 by LighterThanAirSociety 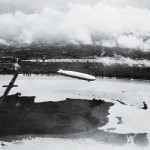 By Michael Greshko and SM ’15

Just before dawn on September 3, 1925, the Shenandoah, an airship that was over two football fields long and constructed from an alloy of copper and aluminum, was engulfed in a violent squall as it floated over southeastern Ohio. For 30 frantic minutes, Lieutenant Commander Zachary Lansdowne and his crew tried mightily to control the ship. By sunrise, 14 of its 43 crew members were dead, and the Shenandoah – only two years old – was in pieces on the ground.

Jerome Hunsaker, ScD ’16, who had designed the Shenandoah for the U.S. Navy, wouldn’t get any details of the crash until weeks later, when a colleague wrote to him in a letter that “a local twister” had torn the ship in half.

Hunsaker was a restless innovator in the young field. In 1914, he taught MIT’s first course in aeronautical engineering. In 1919, the NC-4—a flying boat he helped design—became the first aircraft to fly across the Atlantic Ocean. The Shenandoah was Hunsaker’s first rigid airship, and the first American-made rigid airship, period. In designing it, he used new aluminum alloys, hull designs inspired by a captured German dirigible, and more than two million cubic feet of helium. He believed it would be the safest airship ever made. 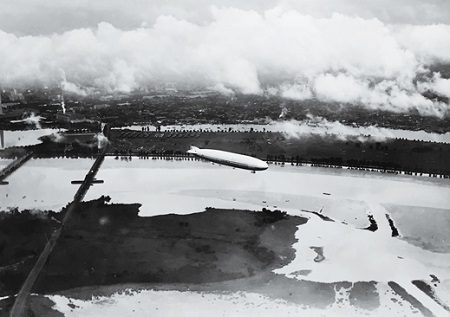 The Shenandoah in October 1923, a little less than two years before it broke up over southeastern Ohio.
Image: MIT Technology Review

So what had gone wrong?

The details were fuzzy. It was clear that the cables and struts holding the control car to the hull had snapped, causing most of the casualties when the ship plummeted to earth. And several months before, the Shenandoah’s crew had removed some of the automatic gas valves to save weight, which some thought might have caused the gas cells to overinflate and damage the surrounding structure.

The Navy appointed William Hovgaard, an MIT professor of naval design and construction, to serve as technical advisor for the crash inquiry. Hovgaard had a lot of experience with complicated accidents. He’d been an expert witness in investigations related to the Titanic and the Lusitania disasters. He’d also mentored Hunsaker while he was a student at MIT and had advised the Shenandoah’s design.

Hovgaard sifted through the Shenandoah’s surviving instrumentation, weather reports, and the surviving crew members’ testimony, and by December he’d reconstructed what he felt was the likeliest chain of events the morning of the crash.

At 4:25 a.m., the Shenandoah’s “elevator man” noticed he couldn’t control the ship’s altitude. The crew cranked up the engines and pointed the airship’s nose downward, but the ship continued to rise, increasingly at the mercy of the winds, as two engines overheated. A violent gust of wind caused it to roll and pitch uncontrollably.

Desperate to get out of the maelstrom, the crew dumped more than 4,000 pounds of water ballast, but to no avail. By 4:53 a.m., the Shenandoah had crashed on the fields of Noble County, Ohio.

Hovgaard concluded that no mechanical flaw was clearly to blame, but he urged that the event be used as impetus to improve weather services and airship designs. Crashes like the Shenandoah’s were “not necessarily inherent in the art,” he concluded, although they did point to “the magnitude of the difficulties” with lighter-than-air flight.

But the challenges facing ships like the Shenandoah proved impossible to overcome. Later, as vice president of the Goodyear-Zeppelin Corporation, Hunsaker tried to make airships more widely popular. He touted the Navy’s massive USS Akron and USS Macon, whose design and construction he oversaw. By early 1935, however, both ships had been destroyed in thunderstorms, resulting in the deaths of 75 people. Hunsaker ultimately left Goodyear-Zeppelin to head the Department of Mechanical Engineering at MIT and, later, the Department of Aeronautical Engineering.

Haunted by the Shenandoah and later setbacks, he was forced to give up his dream of airships crisscrossing the ocean.