Posted on February 28, 2016 by LighterThanAirSociety 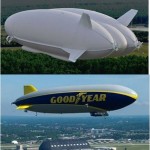 There are two airships that expect to make their maiden flights in March. One of them is the second Goodyear Blimp NT being built at the Wingfoot Lake Hangar in Northeast Ohio, the other is the Airlander being built by Hybrid Air Vehicles at the Cardington Hangar in Bedfordshire (UK). 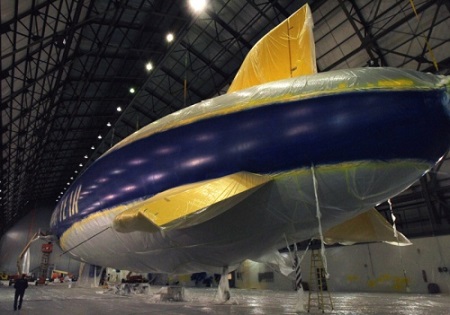 And it looks ready to fly out of the Wingfoot Lake base in Suffield Township, where workers have spent most of 2015 assembling it from parts shipped in from maker Zeppelin in Germany.

But first flight is still maybe a month away — for one thing, the semi-rigid airship is inflated with air, not helium, and remains suspended from the ceiling inside the Portage County hangar. 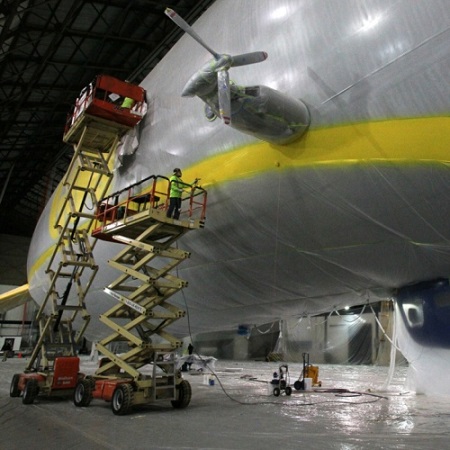 The unnamed craft is now adorned with the Goodyear corporate name and traditional blue, gold and silver-gray colors recently painted on the envelope skin by workers with Akron painting and construction company Thomarios.

Thomarios employee Gary Hagen said he never realized when he was a child and drew with crayons his mother bought him that it would lead to a career in which he would help paint Goodyear airships. 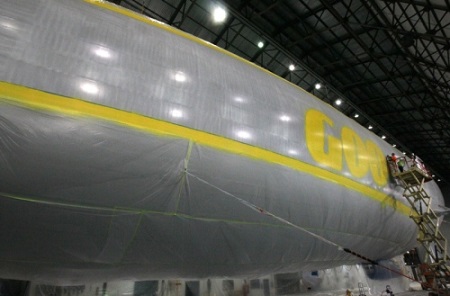 “I’m going to be 64 May 2nd, and I’m still like a little kid when it comes to this stuff,” he said. “I’m just always so intrigued by [the Goodyear blimp]. I’ve watched this thing fly around my neighborhood since I was a pup, and now they’ve got these new ones. It’s really incredible.”

Hagen’s job in part was to keep an eye on the lengthy paint hoses that ran from paint containers on the hangar floor to painters spraying the blimp from lifts. He has worked since 1974 for Thomarios, which has a specialty division that restores historical aircraft and spacecraft — projects included a Saturn V rocket. 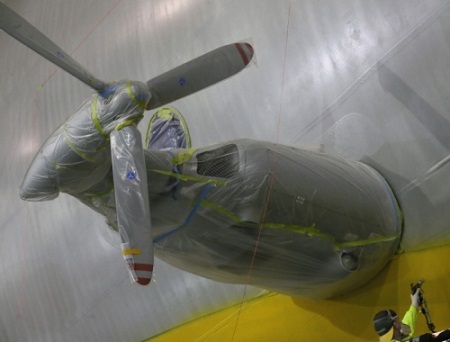 “I doodled jets, rockets I ended up painting as an adult. So it’s pretty comical,” Hagen said.

The airship’s new-car smell comes from about 120 gallons of an Akron-made specialty primer and topcoat paint. The high-tech paint comes from what is believed to be Akron’s second-oldest company, APV Engineered Coatings Inc., whose history dates to 1878. 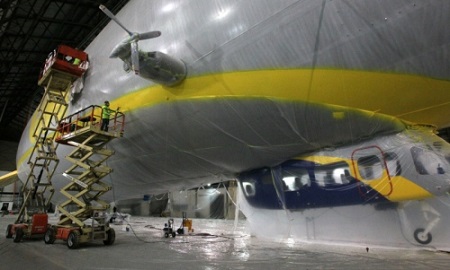 “[NeverFade] is a higher performing product than anything you would see in a hardware store,” Brown-Neff said.

Gary Hagan, an employee with Thomarios in Copley, applies a stencil of a “D” before beginning to paint it on Goodyear’s new airship.
Photo: Ed Suba Jr. – Akron Beacon Journal.

Goodyear required a paint that would stand up to weather, minor impacts and abrasions while not fading or cracking on an airship’s thin, flexible skin, she said. APV’s NeverFade met those standards, Brown-Neff said.

“The resin technology is flexible in nature,” Brown-Neff said. “We formulated the coating to further improve the flexibility.” 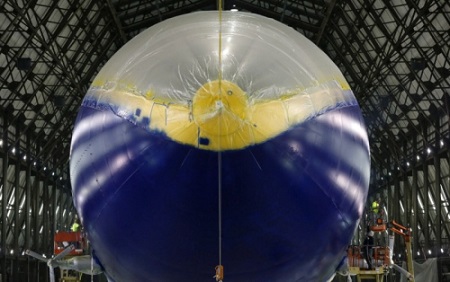 APV, in partnership with Thomarios, modified the NeverFade paint to make it easier to apply to the airship, she said.

With the painting complete, the days are dwindling to when the airship will make its first flight. Workers last week were peeling off protective plastic coatings on the envelope. 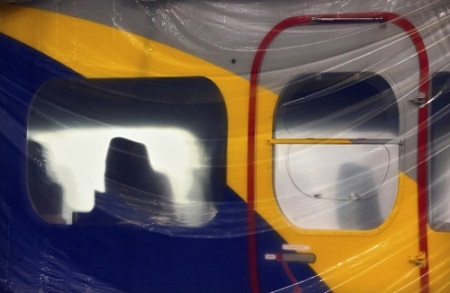 The gondola of Goodyear’s new airship is protected by plastic as employees with Thomarios in Copley, apply another coat of blimp blue V2.
Photo: Ed Suba Jr. – Akron Beacon Journal.

The next major step is to inflate the airship with helium, said Goodyear spokesman Eddie Ogden.

“At this time, it’s hanging from the ceiling because it is not lighter than air,” he said.

Helium inflation is scheduled for Feb. 25, he said.

Goodyear has not said when this new airship will fly. Besides the readiness of the aircraft, Northeast Ohio winter weather also needs to be factored in. (Keep in mind that Goodyear’s first NT airship, named Wingfoot One and now based in Florida, first flew on March 17, 2014.)

“First flight will be in March. We don’t have a specific date for that yet,” Ogden said.

The iconic airship that currently resides in Cardington Sheds is prepared for the last major attachments which will be completed in quick succession over the coming weeks. 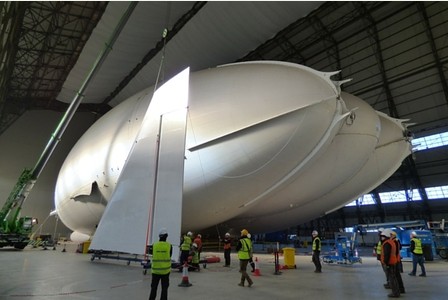 The Airlander 10, which is the largest aircraft in the world, saw the attachment of its first fin today, with the remaining fins and engines to come shortly ahead of its first UK flight in spring.

The giant fin was expertly lifted and attached to the unique hull in a matter of hours, using a giant crane usually used in rail engineering. 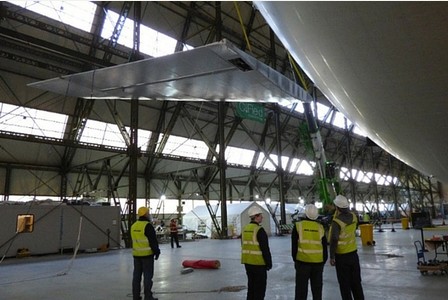 The fin, measuring 9 x 11 m, was secured to the hull using a series of cables and clamps that will maintain its position, even under duress.

A spokesman for Hybrid Air Vehicles, who are working on the craft, said: “If you were to lay two tail fins side-by-side, they would comfortably cover the playing area of a tennis court.” 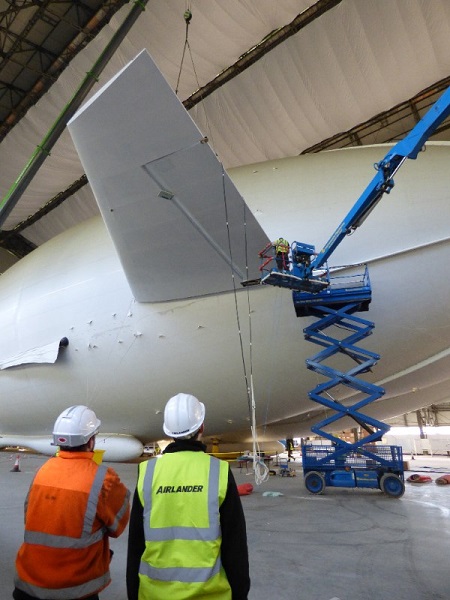 Earlier the control car of the Airlander had been attaqched to the hull of the airship. 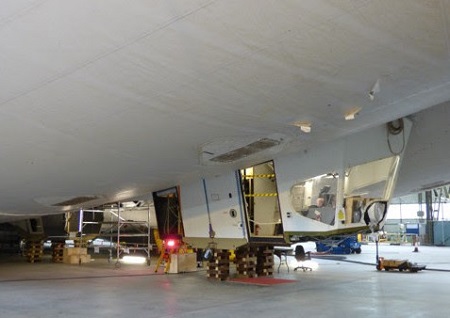 The mission module, which includes the cockpit and payload bay, follows the attachment of the fuel tank and the payload beam, which supports bulky external cargo. 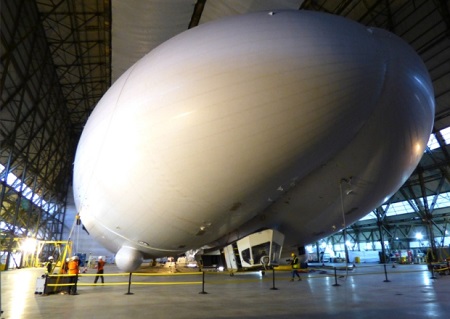 The fuel tank had also been installed. 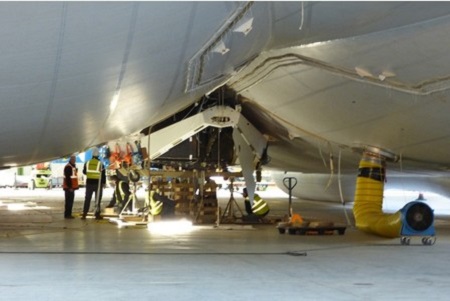 Fuel tank being fitted.
Photo courtesy of Bedfordshire on Sunday 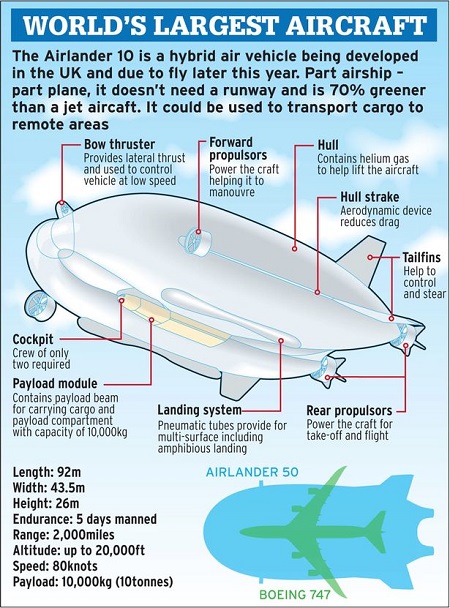