Posted on May 12, 2016 by LighterThanAirSociety 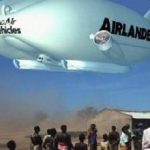 One of the world’s largest – and British-made – aircraft could be dominating the skies over Hampshire in July with the giant Airlander airship taking part in the Farnborough airshow.

At 302ft long, the Airlander 10 is being developed by British aviation company Hybrid Air Vehicles (HAV) at its base in Bedford.

Described as a mix of aeroplane, airship and helicopter, the Airlander is more than 60ft longer than Airbus’s huge A380 airliner and contains 1.3m cubic feet of helium, which makes it float.

This lighter than air gas is contained in a body which is aerodynamically shaped like a wing to create lift, meaning the Airlander also “flies” like a normal aeroplane when driven by its engines. 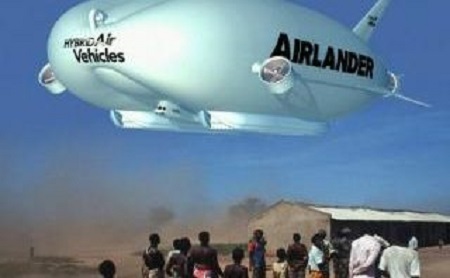 The Airlander has the ability to land anywhere and does not need airstrips.
Credit: HAV

It is powered by a series of propellers housed in ducts, which can be swiveled to allow the Airlander to maneuver in any direction.

HAV used a media day ahead of the biennial airshow in Hampshire to announce its hopes to display the Airlander, which only took off for the first time in April, floating up from the ground inside its hangar.

The company is currently running “ground tests” on the Airlander, and needs to complete 200 hours of flights before it can gain the certification it needs to operate commercially.

A HAV spokesman said the company hoped to display the Airlander at Farnborough if the aircraft is ready and the appropriate clearances had been obtained from the authorities.

The Airlander design was originally developed for the US military in 2009 but was repurposed for commercial use when the defense project stalled.

HAV, which works out of the historic hangars at Cardington Airfield where the R101 airship was built in the 1920, hopes to build 12 Airlanders a year by 2018.

The aircraft – which can take off vertically and land on almost any surface, including ice, sand and water –  is hoped to be able to carry 48 passengers.