Posted on May 13, 2016 by LighterThanAirSociety 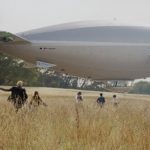 Not a magic carpet ride, but pretty close

Movie night with friends reaches epic heights in Grey Goose’s latest chapter of the “Fly Beyond” campaign from BBDO.

In a bit of an odd premise, the vodka brand’s “La Pursuit” spot features a pack of friends who pile into a couple of cars and set off on a dirt road, looking for awesome. Why the sight of a goose in flight would trigger an inspired chase is a mystery, but it’s as good a signpost for a bored group as any, and at least they’re not hitting cats in a bag or something. 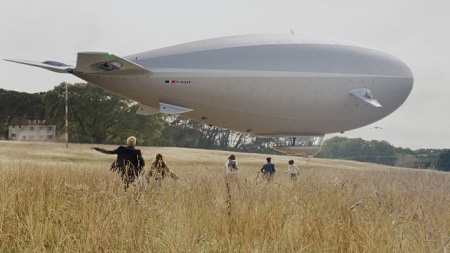 The experience does feel extraordinary, and a playful score helps keep the tone light
Image courtesy of AdWeek

This goose, though, knows where it’s at.

Our feathered friend guides the group to an enormous—and nicely stocked—dirigible, complete with its own swarthy driver. On their wandering quest to nowhere in particular, they scoop film up at an old cinema, jam in an abandoned (yet curiously well-varnished) lighthouse, grab some ice in snowy climes for their cocktails, and enjoy a French film projected onto a cloud.

Watch it all unfold below:

” ‘Fly Beyond’ is a timeless platform,” says David Lubars, chief creative officer of BBDO Worldwide. “Our job was to make it relevant for what’s happening today. In the end, you want people looking at every part of the campaign thinking, ‘I want to be part of that.’ ”

Previous iterations of “Fly Beyond” explored Grey Goose’s ambitious origins, and portrayed Grey Goose as the ideal take to celebrate with friends. And while the classic fantastic voyage is just another common spirits trope, “La Pursuit” is an imaginative spin over the old “road trip over whiskey” scene … and it definitely beats another night of Netflix and chill.

The experience depicted here really does feel extraordinary; it’s not just a wank-fest of rich people pursuing expensive things, and a playful score keeps the action light on its feet. When was the last time you rode a dirigible? Or even thought about one?

The elevation of the rather underappreciated goose into a creature worthy of myth is another nice touch in the hands of director Steve Ayson and Robert Elswit, Oscar-nominated director of photography. “The Goose itself becomes the ultimate luxury icon, imbuing it with more meaning and turning it into a symbol that, when seen, sparks curiosity and desire,” the brand says. (Aw, look—they even capitalize it. Bet that’s in the Guidelines.)

The :60 debuted on NBC’s Blindspot, and will also run during the NBA playoffs and other prime-time windows, including the finale of Quantico, Saturday Night Live and the Billboard Music Awards. The TV variant will be accompanied by print and out-of-home executions that feature Le Grand Fizz, Grey Goose’s signature cocktail for the summer. Digital and social elements will enable people to share their own extraordinary adventures.

As icing on the cake, Grey Goose is also offering its own, real-life whimsical pursuit: This summer, it’s launching a 20-city pop-up store experience called Boulangerie Bleue, which promises to take people to the French Riviera via a secret entrance in a traditional bakery. (We’re not sure if that’ll be via dirigible, but we’d go on the off-chance.)

The Boulangerie Bleue program took place in Cannes and Paris last year, where wanderers could order drinks at the world’s tiniest dry martini bar, or jam to French band The Shoes under a canopy of paper cranes (or geese). If you’re stateside and East Coastal, you’re in luck: The Boulangerie’s first stop this year will be New York.

This entry was posted in Airships and tagged airship, Grey Goose Vodka. Bookmark the permalink.