Posted on October 9, 2013 by LighterThanAirSociety 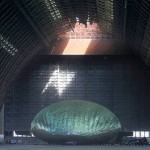 “This won’t stop us, and we’ll continue to move forward full speed on fleet development plans for the 66-ton and 250-ton cargo capacity Aeroscraft to provide vertical air delivery of cargo around the world,” remarks Igor Pasternak.

Yesterday morning, emergency personnel responded to a partial roof collapse at Airship Hangar 1, located on a former Marine base in Orange County, just before 8:00 am. A 25’ x 25’ foot hole in the structure’s roof collapsed for unknown reasons. The incident caused no injuries to personnel but inflicted damage to the tail end of the Aeroscraft engineering demonstration vehicle housed within the hangar.

Building 28 (Airship Hangar 1) is designated as a National Historic Civil Engineering Landmark. It was used originally during World War II to house aircraft and airships utilized for maritime patrol of the West Coast and Pacific Theater, and has been used more recently to house the advanced prototype for a new cargo dirigible known as an Aeroscraft. The building has an adjacent ‘sister’ structure on the property (Bldg. 29; Airship Hangar 2). 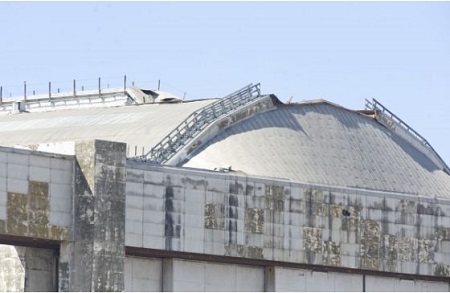 A large section of the roof of the blimp hangar in Tustin collapsed Monday morning, sending debris down onto the Aeroscraft helium-filled airship inside the hangar.
Photo: Sam Gangwer, Orange County Register

“We’re very fortunate and grateful no one was injured by the roof collapse, and that the vehicle has been successfully tested and flown providing our engineers and flight operations team with useful insights and data for nearly a year,” further explains John Kiehle, Director of Communications at Aeros.

“Our initial visual estimates show that the vehicle is potentially repairable; however, we won’t be able to send in our team for further evaluation until the area is deemed safe for entry,” comments Igor Pasternak, CEO of Aeros. “This won’t stop us, and we’ll continue to move forward full speed on fleet development plans for the 66-ton and 250-ton cargo capacity Aeroscraft to provide vertical air delivery of cargo around the world.”