Posted on July 23, 2014 by LighterThanAirSociety 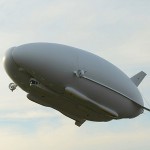 Blimps are back, with the ability to carry massive payloads cost-efficiently. But can the industry really rebuild itself?

Aerospace Giants and startups are preparing the revival of a century-old concept: the Zeppelin. Once envisioned as a way to travel across the Atlantic in great luxury, the new generation of giant blimps is being targeted at industrial sectors with a track record of spending large amounts of money in the pursuit of a competitive edge: telecommunications, mining, and defense. 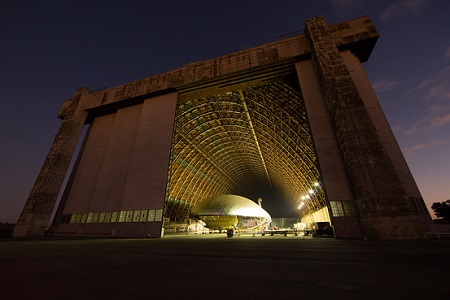 Some of the top aerospace companies, including Lockheed Martin Corp.and Thales SA, are becoming involved in the lighter-than-air sector that has long been championed by a coterie of smaller companies.

Customer interest is also rising as Icelandair’s cargo arm and Cargolux, one of the world’s largest independent airfreight operators, express interest in the form.

The attraction of the massive hulls, which can measure more than 500 feet in length, is their ability to carry large amounts of cargo from remote areas where planes often can’t land. Though slower than a cargo jet, blimps have far lower transport costs. 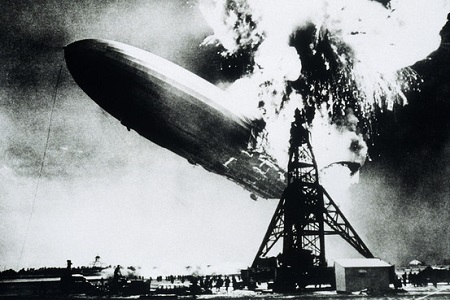 The German Hindenburg, catching fire on May 6, 1937.
Photo: Getty Images

One of the biggest problems for the Zeppelin zealots, however, has been one of perception. The most iconic image of the industry is that of the Hindenburg disaster in 1937, which was caught on film when the hydrogen-filled hull caught fire, engulfing the vehicle in flames, and killing 36 people.

“We have to change the public perception,” said Jean-Philippe Chessel, who heads the StratoBus airship project at France’s Thales. The company plans to build a demonstrator in about five years to help build confidence among potential customers and safety regulators. Thales said its vehicle will be solar-powered, fly at 60,000 feet and remain airborne for a year. It could be used by the military in crisis areas, carrying cameras, radars or telecommunication relays. The airship would provide ad hoc coverage at far lower cost than a satellite, said Mr. Chessel.

Other prototypes have already taken to the air. Lockheed Martin flew the P-791 hybrid airship demonstrator in 2006 and in 2012 began the process to win a type certificate for the LMZ1M airship that would feature a gondola for up to eight passengers and two crew members. The vehicle could also carry cargo in an internal bay or externally.

Britain’s Hybrid Air Vehicles Ltd. flew its Airlander 10 in 2012 under a U.S. Army contract with Northrop Grumman Corp. Its California-based rival, Worldwide Aeros Corp., flew the Dragon Dream vehicle about 30 hours last year. The craft is a half-scale prototype of the planned ML866, designed to carry 66 tons of payload. 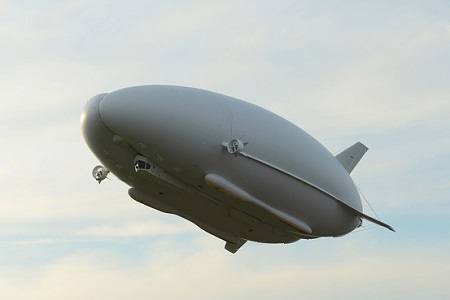 Modern airships are far more sophisticated than Zeppelin-era designs, featuring advanced buoyancy systems and the use of advanced materials in their structure. The Lockheed airship would feature fly-by-wire electronic controls now widely used on combat jets and modern airliners.

Igor Pasternak, chief executive of Worldwide Aeros, said airships could spur a revolution in air transport. “We are creating the Internet for logistics,” he said. The company is working with potential users to explore how best to employ such transportation systems. “The challenge is how do we structure the right business model,” Mr. Pasternak said.

Establishing the industry hasn’t been without its setbacks. The U.S. military canceled the program involving HAV’s Airlander after deciding it couldn’t meet military needs in Afghanistan fast enough. Hybrid bought the aircraft back from the U.S. government and is now rebuilding it for demonstration flights, said Chris Daniels, head of partnerships at HAV. The goal is to return it to flight early next year. Work has also started on a larger version, the Airlander 50, with a range of 2,600 nautical miles.

Worldwide Aeros’s craft suffered a partial roof collapse of a hangar which heavily damaged the Dragon Dream. The company isn’t sure it will rebuild the vehicle, Mr. Pasternak said. It is, however, pressing ahead with construction of the first two operational ML866s. Work on a vehicle capable of carrying 250 tons of cargo will start in two years.

The biggest challenge for the industry isn’t technical, Mr. Pasternak said, but financing. Worldwide Aeros is funded for the next 12 months, but needs more capital to complete construction of its first operational vehicles. Hybrid is funded through to early next year and the planned return flight of the Airlander. It hopes to secure orders by then to proceed with building further vehicles.

The companies are confident, however, that the market holds enough promise to help them raise funds. Hybrid sees a potential market of 650-1,000 airships over several decades, although Mr. Pasternak said it is difficult to gauge the size of the market accurately since airships are a disruptive technology.

Production plans are ambitious. Worldwide Aeros has plans to build as many as 12 vehicles a year. Hybrid targets production of 30-40 airships a year toward the end of the decade. “Our biggest issue is likely to be satisfying demand,” Mr. Daniels said.

Not everyone is a convert. Airbus Group NV, which explored the airship concept, has shelved plans, said Sebastien Remy, the company’s head of innovation. The company saw too many obstacles for a viable system, though Mr. Remy wouldn’t rule out an eventual reversal, in partnership with another company