New Airships to Get Second Wind in Dubai

Posted on April 26, 2016 by LighterThanAirSociety 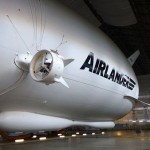 Dubai, already a huge aviation hub that is forecast to draw an astonishing 37.5% of its entire GDP from aviation-related activities by 2020, is on the verge of adding another string to its bow with the start of hybrid airship activities there.

‘Hybrid airships’ – some prefer the term ‘hybrid aircraft’ – are the modern versions of the great vessels that, for a brief period in the 1930s, seemed as though they were the shape of future air travel. The dreams of their proponents came to a sudden halt after the destruction of several in devastating fires, caused by their use of highly-inflammable hydrogen to create lift.

Compared to those vessels the new-generation designs are, effectively, inflated flying wings that produce a sizeable percentage of their lift from their aerodynamic shape.

And by the end of this decade a Dubai-based company, Airships Arabia, plans to have bought examples of two different hybrid aircraft.

One, Lockheed Martin’s Hybrid Airship, will have a 10ft x 10ft x 60ft cargo bay capable of carrying a 21-ton payload and 19 passengers. A British counterpart, the Airlander 10, has a smaller payload of 10 tons, but space for 48 passengers. And the latter’s manufacturer, Hybrid Air Vehicles, plans rapidly to follow up its initial model with the substantially larger Airlander 50, which will have a payload of 50 tons, or six standard ISO shipping containers.
We’ve been here before, of course.

Airship enthusiasts have been predicting for at least 30 years that airships were on their way back, focusing on their abilities to deliver people, but primarily cargo, to remote spots that lacked surface transport infrastructure. 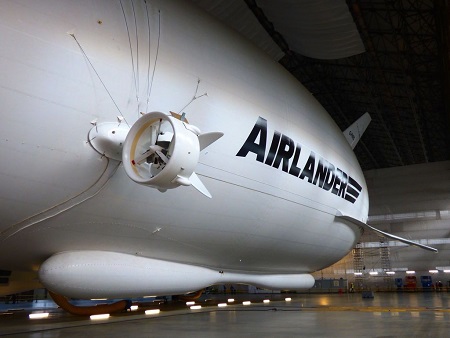 In the early years of this century, for example, a German company, CargoLifter, got quite far down the road to developing a leviathan that could lift a 160-tonne payload. However, it ran out of funding before it could get the craft into production. And Zeppelin, the most famous name in airships, is still in business, but only in a modest way, flying tourists on pleasure trips around southern Germany.

This time, however, say airships’ supporters, everything is in airships’ favor to make a comeback. Airships use considerably less fuel than conventional aircraft, which will give them good operating economics when fuel prices rebound in the next few years. They don’t need much in the way of ground support or basing facilities. And they can deliver outsize, heavy loads to remote areas that do not have airstrips.

Airships Arabia sees several different roles for its new vehicles. One is transporting fresh flowers from Kenya, a major growing region for blooms, up the East African coast to Dubai, which is a distribution point for fresh flowers all over Europe.

The flight north from Kenya will take considerably longer than a conventional aircraft, of course – a flight from Nairobi to Dubai takes five hours, whereas a hybrid airship would take 24 – but that is deemed acceptable.

A major plus, says Airships Arabia, is that when carrying a light but bulky cargo such as flowers, a conventional aircraft bulks out before it loads out, something that will not happen with a hybrid airship.

A base like Dubai would also make a good jumping-off point for outsize cargoes for activities in Africa such as mining or mineral exploration. Alternatively, an airship would rendezvous with a cargo vessel at an African seaport, the equipment would be transferred and the airship would then head off into the interior.

Interestingly, Airships Arabia believes that a hybrid airship could also be suited for ‘commuter routes’ in the Gulf.

It points out, for example, that the distance between Manama, the capital of Bahrain and Doha, its counterpart in Qatar, is just 76nm; between Dubai and Muscat, in Oman, 205nm; or between Abu Dhabi and Fujairah, at either end of the United Arab Emirates, 102nm. An airship cruises at a little over 100kts, so all of those sectors would be not only be short but potentially quicker than a conventional aircraft when you eliminate the rigmarole of negotiating an airport.

Airships Arabia specifically mentions the Abu Dhabi – Dubai route. The two UAE cities are roughly an hour away from each other; but local residents know that the famously snarled-up motorway linking the two can easily take twice that time to negotiate.

So, the potential exists. Perhaps Dubai, already a major aerospace hub, will be talked about in generations to come, as the place where the lighter-than-air revolution got its second wind.