Posted on April 27, 2016 by LighterThanAirSociety 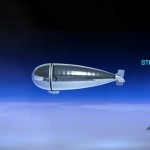 A team led by a joint venture of Thales Group and Finmeccanica has received approximately $19.2 million in funds from the French government to conduct research and development work over two years on an autonomous airship.

Thales Alenia Space will collaborate with French companies CNIM, Solutions F, Airstar Aerospace and Tronico-Alcen on the structure, electric propulsion system and other components of the Stratobus airship project under the contracts signed with investment bank Bpifrance, Thales said Tuesday.

Thales Alenia Space will provide solar arrays and avionics systems as well as integrate parachutes from Canada-based MMIST and energy storage platforms from Norway-based Cmr-Prototec with the Stratobus airship, which is expected to get $3.4 million in additional funds.

The airship will work to carry payloads at an altitude of approximately 12 miles designed for use in surveillance, security, telecommunications and environmental monitoring operations.

The Thales Alenia Space-led team plans to roll out a demonstrator in 2018 and conduct the initial qualification and certification flights for the airship by 2020.