Lockheed Built a Blimp-Crawling Robot That Finds and Fixes Leaks

Posted on July 27, 2016 by LighterThanAirSociety 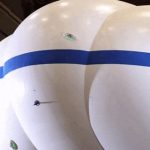 Satellites and autonomous drones have reduced our need for cutting-edge spy planes and stealth fighters. So Lockheed’s famed Skunk Works, creators of the SR-71 Blackbird, have now built a unique robot called the Spider that can crawl over the surface of blimps to find and fix tiny pinhole leaks.

Inspecting an airship’s fabric inflatable envelope is usually a process done manually, requiring intensely bright handheld lights, a good set of eyes, and the craft to be completely deflated. It’s time-consuming and terribly inefficient, but Spider—short for Self-Propelled Instrument for Damage Evaluation and Repair—can perform the same inspections while the craft is fully inflated.

The robot consists of two magnetically-attached halves, one that sits on the outside of the airship, while the other clings to it from the inside. Using a set of bright LED lights and a camera, the Spider bot can automatically spot pinhole leaks, and then reposition itself to patch them. Photos of the repair, before and after the hole is patched, are sent to a central server for further human inspection, but that adds minimal time to the mostly automated inspection process.

As airships are slowly becoming useful again—for tasks including everything from cargo hauling, to meteorological data gathering, to spreading free internet—there will undoubtedly be a demand for Lockheed’s Spider bot. It might not be as cool or Smithsonian-worthy as the SR-71 spy plane, but it’s a clever solution for keeping airships airworthy.

Source: BBC Video on You Tube

Source: BBC Video on You Tube