Posted on July 28, 2016 by LighterThanAirSociety 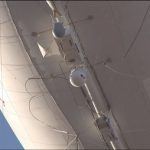 There is too much happening at the Olympics in Rio de Janeiro for any person to watch it all. Not just the sporting events, though there are over 30 events during the 16 days of the event. For the security personnel tasked with making sure athletes, attendees, and civilians are all safe during the event, that’s a sky-high task, so it helps that Brazil is going to have an all-seeing camera on a blimp record everything happening within an area of 15 square miles. 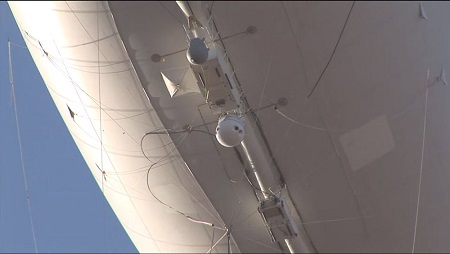 Airborne Camera Watches All – This is the camera on the Kestrel system, predecessor to the Simera system that will be used during the Olympics.
Screenshot by author, from YouTube

Here’s what that looks like, compared to the area the security cameras on a building can normally see.

Initially developed for use by U.S. forces in Iraq and Afghanistan by Fairfax, Virginia-based Logos Technologies, the technology is sold under the name Simera, and offers live aerial views of a large area, or what the company calls “wide-area motion imagery,” captured from a balloon tethered some 200 meters above the ground. The system’s 13 cameras make it possible for operators to record detailed, 120-megapixel imagery of the movement of vehicles and pedestrians below in an area up to 40 square kilometers, depending on how high the balloon is deployed, and for up to three days at a time.

The Brazil sale, which includes four systems operated under an $8 million contract, marks the first export of Simera, and the first time such as system will be deployed by a non-U.S. government at a large-scale event, the company says. “Simera was built late last year and we tested it this past February and then immediately sold four of them to Brazil,” says Doug Rombough, Logos’s vice president of business development.

The system is technically an aerostat, not a blimp, which means the inflatable sack of helium carrying the cameras is attached to a tether. That tether keeps it in one place, putting the “stationary” in “aerostat,” and it also means video captured from up high can run down a cable to the people using the system. That’s a secure, faster data link than going through satellites or transmitting it in other ways.

If the weather stays calm, the system only has to land every three or so days, and another can be floated to keep the same watch in the meantime. It’s a neat technical marvel, for a highly powerful surveillance system.

Here’s what Kestrel, Simera’s predecessor, looks like spinning in action.

The catchphrases are a nice range of ominous: “Collecting the Present,” “Searching the Past,” “Safeguarding the Future.”