Posted on September 13, 2014 by LighterThanAirSociety 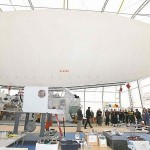 Solar-power system to run hangar may one day produce hydrogen.

But there is a research entity and a for-profit company called Buoyant Aircraft Systems International (BASI) that is developing airship technologies. 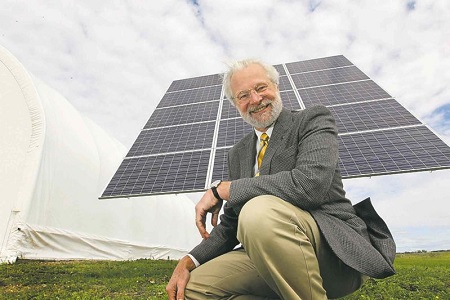 Barry Prentice crouches next to a new solar-power system installed at the BASI hangar, which currently provides heat and light for the operation.
Photo: Ruth Bonneville – Winnipeg Free Press

Both are the brainchild of Barry Prentice, the University of Manitoba logistics and transportation expert, whose passion to see the development of massive airships that can haul tons of cargo to the Canadian North at very low cost with little environmental impact is undaunted, even though many believe it’s futile.

There are countless challenges in establishing a system for such a form of transport, including the high cost of developing the massive airships and establishing a basic infrastructure to manage them.

Not the least of those challenges is a shortage of helium, the lighter-than-air gas that creates the buoyancy.

The gas is in such short supply large-scale US military projects have had to be curtailed. (Although many believe these massive slow-moving airships are the stuff of pie-in-the-sky dreamers, the US military, the originator of many technologies now in commercial use, have invested millions of dollars in airship development.)

If airships ever do become a viable means of transport, the availability of — or alternative to — helium will have to be addressed.

Prentice has been tilting at the airship windmill for 10 years now.

He regularly expresses his frustration about how long it is taking, but is becoming philosophical about that.

On a shoestring budget, he and his design partner, Dale George, have established a small development shop in a canvas hut at the end of an unused runway at St. Andrew’s Airport. 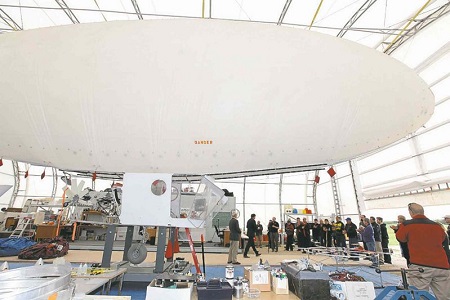 The shop, funded almost entirely out of their own pockets, just unveiled a solar system to power the operation, which is off the hydro grid.

“That gas-powered generator was so noisy, I’d like to throw it in the lake,” Prentice said.

But in addition to providing heat and light for the operation, the generation of solar power stored in a rack of batteries could lead to some other interesting developments specific to the airship business.

Prentice is already thinking about the possibility of using the excess electricity generated from BASI’s solar panels to produce hydrogen, which could be used both as fuel for the engines on the airships and as a possible replacement for helium.

“We see this as being part of the picture,” said Prentice. “We’re not saying it can be done. That’s what research is for. But why not try it?”

BASI is already working with a company out of Ontario that has an innovative new design for a hydrolyzer.

“Instead of taking fuel up to the North for vehicles, we could produce the fuel there,” he said. “That changes the economics of this. It also means that those communities can be more self-sufficient.”

Prentice is a highly regarded academic, and his work in the field is known around the world. His modest announcement of the addition of solar power to his green operations had enough credibility to attract two local federal politicians — MPs James Bezan and Lawrence Toet — in what was far from a high-profile event.

Hydrogen, which is highly flammable, has been prohibited for use in airships since the late 1930s after a number of accidents, including the spectacular crash of the Hindenburg in 1937.

Prentice understands the significant safety issues and the general aversion to the use of hydrogen.

“The prohibition has been in place a long time, and we did not have the material or technology we have today,” he said. “In order to change that (the general sense it is dangerous) you have to prove you can do it safely.”

Among other things, BASI is developing unmanned versions of its airship design, which might provide another reason to overcome the fear of hydrogen.

Lorena Mitchell, president of EvolveGreen, the Marchand, Man., company that supplied the solar-power system for BASI, said her company has already been involved in a hydrogen-production facility. (The idea is hydrogen can be produced by applying electricity to water.)

Prentice will be the first to tell you airships are a long way from becoming a commercial realty. But the reasonableness of the concept won’t go away.