Posted on September 11, 2014 by LighterThanAirSociety 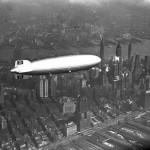 It was probably the most dramatic live radio news broadcast in history. On May 6, 1937, the German airship Hindenburg caught fire and crashed upon landing at the Lakehurst Naval Air Station.

And then came the signature line: “Oh, the humanity, and all the passengers screaming around here. … I can’t talk, ladies and gentlemen. Honest, it’s just laying there, a mass of smoking wreckage.” 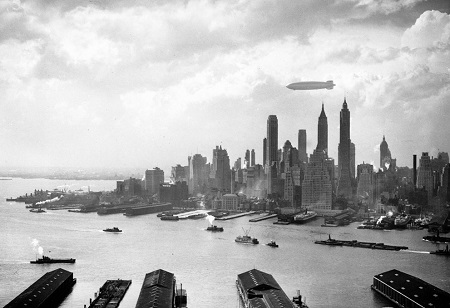 The Hindenburg floats over Manhattan Island in New York City on May 6, 1937, just hours from disaster in nearby New Jersey.
Photo: Courtesy AP

Carl Jablonski, president of the Navy Lakehurst Historical Society, will talk about the disaster on Wednesday, Sept. 17, at 7 p.m. at the Stafford branch of the Ocean County Library in a program sponsored by the Friends of the Library. 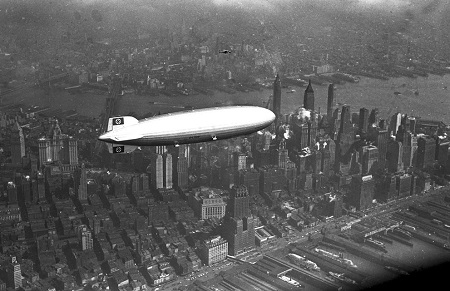 The German zeppelin Hindenburg flies over Manhattan on May 6, 1937. A few hours later, the ship burst into flames in an attempt to land at Lakehurst, New Jersey.
Photo: Courtesy AP

Jablonski said he would discuss the history of the airship. On May 3, 1937, it took off from Frankfurt, Germany, on the first of 10 scheduled round trips between Europe and the United States.

He said the explosion was caused by static electricity and buildup of hydrogen after the dirigible flew through a thunderstorm. The spark that ignited the ship was likely due to a pre-existing gas leak, resulting in flames shooting through the ventilation tubes of the 804-foot airship.

“It only took 34 seconds for the airship to crash and burn and after the initial spark,” he said.

The crash took the lives of 13 passengers and 22 crewmen. Jablonski said that last month, the last surviving crew member, Werner Franz, died in Frankfurt at the age of 92. At the time of the disaster, Franz was a 14-year-old cabin boy. Jablonski met him in 2007 in an event marking the 70th anniversary of the crash. 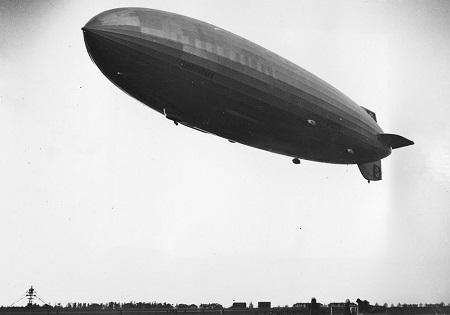 The German dirigible Hindenburg, just before it crashed before landing at the U.S. Naval Station in Lakehurst, New Jersey, on May 6, 1937.
Photo: Courtesy AP

The 73-year-old Jablonski said that he became interested in the Hindenburg disaster as a youngster since his parents had a summer home in Lakehurst and he also had a relative stationed at the naval air station.

“I got to see a lot of airships,” he said. “I found them very fascinating.”