Posted on March 24, 2016 by LighterThanAirSociety 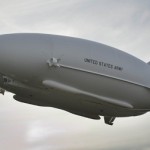 It’s hard to imagine keeping secrets about an aircraft so spectacularly huge that the Guinness Book of Records is believed to be just days away from rubber-stamping its entry.

But until the vast new Airlander 10 airship was unveiled fully assembled in a giant hangar north of London on March 21, it still had a few to reveal. 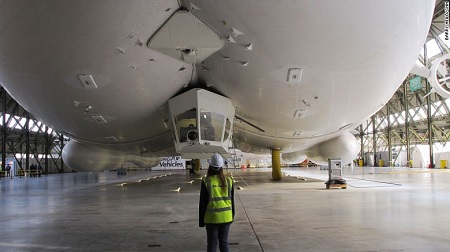 Final assembly – The current Airlander design was unveiled to the public, fully assembled, for the first time on March 21.
Source: CNN 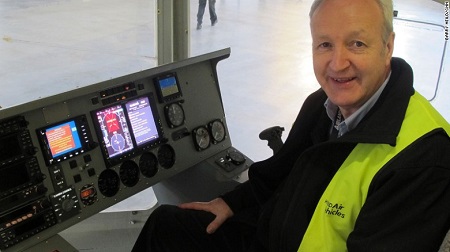 “Last time I flew this in 2012,” says test pilot David Burns, gesturing at the cockpit controls of the aircraft he’ll soon take to the skies in its latest incarnation, “no one was allowed to take photographs of this.” 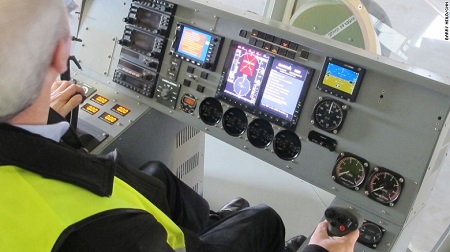 Aircraft-style controls – Burns, a veteran test pilot who has also worked as a commercial aviator, says the controls are similar to those of a plane. He says most pilots would adapt easily to flying the Airlander.
Source: CNN 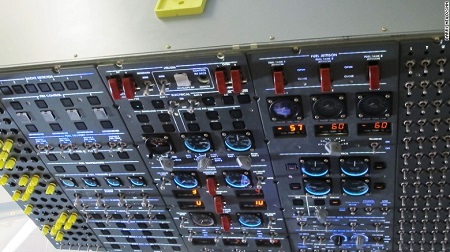 The controls are not entirely different from those of an ordinary plane but include extra switches and gauges that govern gigantic balloons pumped full of helium.

Back in 2012, they were secret thanks to the aircraft’s previous life as a U.S. military project that was grounded due to defense cuts. 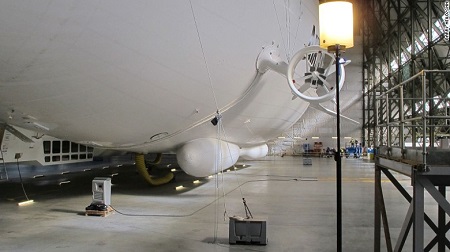 Lift off – Pumped full of helium, Airlander 10 demonstrates its buoyancy within the hangar. It faces several weeks of ground tests before it’ll be allowed out to fly.
Source: CNN

So much so that, at its grand unveiling, Airlander could be seen straining at its moorings and drifting, ever so slightly, a few meters off the ground, apparently ready for action.

Soon, after extensive ground testing, it’ll be leaving its hangar to begin the 200 hours of test flights it needs to complete before being offered to prospective customers.

It may still have a military role — the UK government thinks so and has stumped up cash alongside $3 million of crowd-sourced funds — but Hybrid Air Vehicles, which revived the project, envisages plenty of civilian uses. 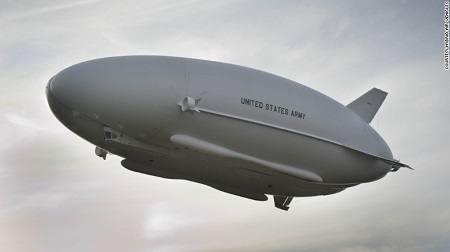 Flying into the future – HAV’s program director Nick Allman says the Airlander has the potential to change aviation forever. “We see it as the future,” he told CNN.
Source: CNN

“It’s going to be a whole revolution in how we use air transport.” 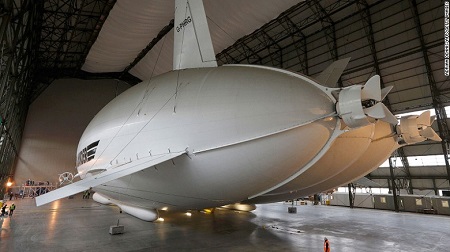 The Airlander 10 is said to be the world’s biggest aircraft — more than 20 meters longer than the Airbus A380 superjumbo.
Source: CNN

The pressure of the lighter-than-air gas helps maintain the aerodynamic shape of a hull made from carbon fiber, Kevlar and Mylar. 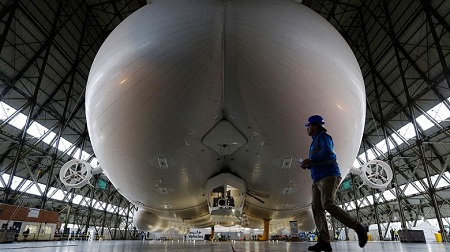 That shape — unkindly described by some as a “flying bum” because it resembles a rather large posterior — provides 40% of Airlander’s lift as it flies through the air.

It’s also fitted with four 325 horsepower V8 diesel engines that can propel it to speeds of up to 148 kilometers per hour (91 mph) and provide vertical thrust for horizontal takeoffs. 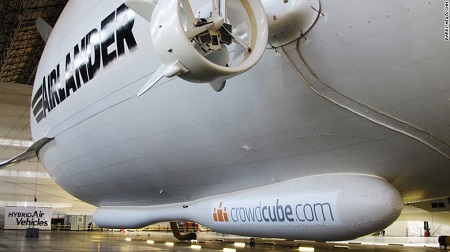 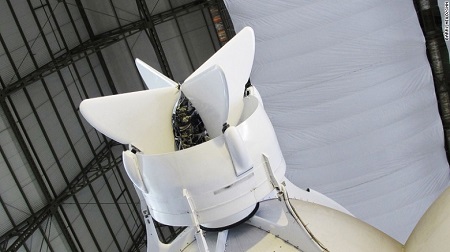 Vertical takeoff – Engine fins can be altered to give vectored thrust, allowing the Airlander to carry out vertical takeoffs and landings.
Source: CNN

Beneath it is space for a payload capable of carrying up to 10 tons and a set of retractable pneumatic “skids” that can be used for landing on land, sand, water or ice. 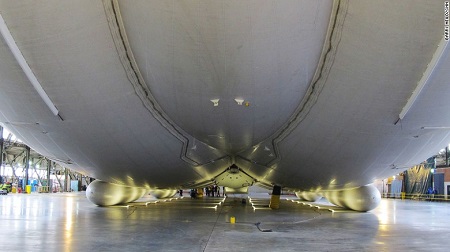 Payload – A view of the rear of the aircraft reveals the space where up to 10 tons of cargo could be stowed. Airlander’s creators are hoping to develop a newer ship capable of carrying 50 tons.
Source: CNN

Its environmental credentials come from its greatly reduced fuel consumption and engine noise levels, in comparison to jet planes. 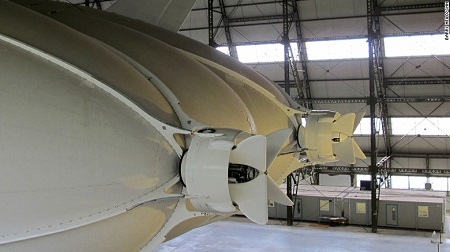 It can reach heights of up to 6,100 meters (16,000 feet) and stay aloft for five days, making it ideal, say its creators, for surveillance, cargo drops or even leisure excursions.

Airlander hangs on to its helium, which is divided into several compartments. These can be manipulated to help control the aircraft but also provide fail-safes in case one is breached. 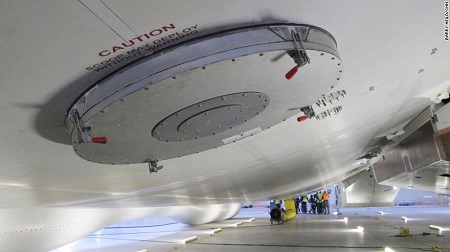 Ballonets – The air pockets, or ballonets, are accessible via hatches in the hull. The helium chambers are not designed for access and would require special breathing equipment to access.
Source: CNN

Altitude is altered by inflating or deflating auxiliary air bags known as “ballonets,” and by altering its speed — without forward momentum it gently glides to the ground. 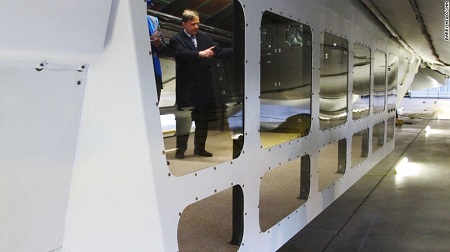 Airlander’s creators say it could carry people for safaris in its windowed lounge.
Source: CNN 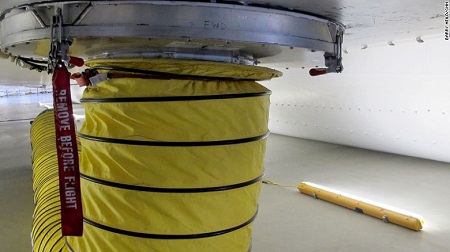 Air bags – As well as helium, Airlander contains air chambers that can be filled or emptied to help maintain the aircraft’s shape as the helium changes volume at different altitudes.
Source: CNN

“It’s really quite a special machine to fly,” says test pilot Burns. “The view from the flight deck is excellent because of the large windows and the airship characteristics, flying at a fairly lowish altitude.” 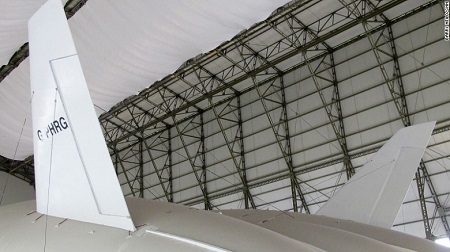 Tailfins – Much like a conventional aircraft, the Airlander is steered using tailfins.
Source: CNN

He also stresses the vehicle’s safety — an issue the airship industry is fated to address thanks to the enduring memories of incidents such as the 1937 disaster in which 36 people were killed when the German Hindenburg airship exploded in New Jersey. 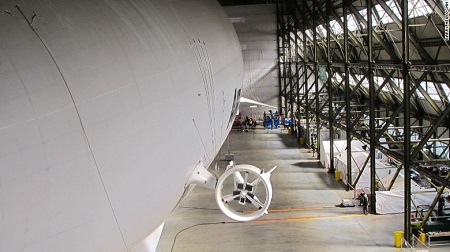 Safety measures – Designed originally for military surveillance, the Airlander’s engines operate independently to increase safety. If all four failed, it could still drift to a safe landing.
Source: CNN

Airlander’s current home, one of two cathedral-like hangars that tower over flat countryside around Cardington Airfield, is another reminder. 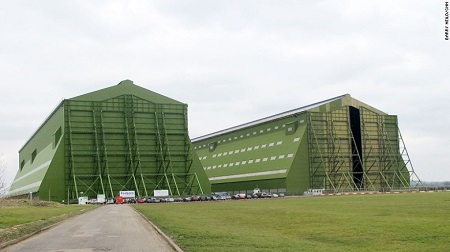 Cardington Airbase – Airlander 10 is housed in one of the largest air hangars in the world. The building was once home to the doomed R101, a massive hydrogen-filled airship that crashed in 1930.
Source: CNN

The structures originally housed the R101, a British-built airship (more than double the size of Airlander) that crashed in October 1930, killing 48 people. 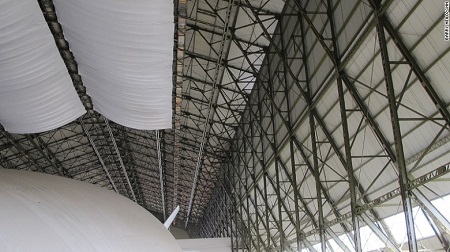 Restoration project – The old hangar is a protected building under English planning laws and was carefully restored to accommodate the Airlander. Those overhead drapes are to catch droppings from birds entering the building.
Source: CNN

With inert gas helium replacing the flammable hydrogen once used in airships, explosion and fire is no longer a danger.

Burns says other risks have also been designed out.

“The aircraft is very resistant to many failures,” he adds. “It has four engines, all totally independent, because it was built as and designed originally as a military aircraft.”

Once Airlander has proved its safety credentials to the relevant aviation authorities, it’ll begin flights aimed at attracting commercial clients. 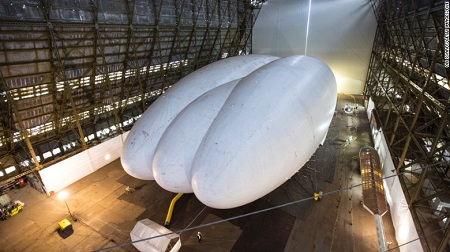 First flights – If tests prove successful, the Airlander could be making its first proper UK flights later in 2016.
Source: CNN

Currently, the aircraft is fitted with a viewing deck that will be used to transport potential customers — and potentially investors including Iron Maiden singer Bruce Dickinson, who has reportedly put $360,000 into the venture.

If Airlander 10 proves successful, blueprints have already been drawn up for Airlander 50, a bigger, better version capable of lifting five times the cargo.

That could truly signal the rebirth of airships. 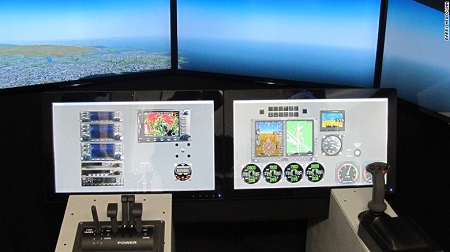 Simulator – An Airlander simulator has been built inside the hangar. Burns and his team have been familiarizing themselves with the controls before flying the real thing.
Source: CNN