Airlander 10 to Make Its Maiden Flight This Summer

Posted on July 7, 2016 by LighterThanAirSociety 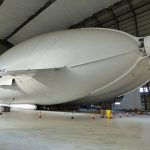 The world’s largest aircraft is finally due to prove its place in the future of air travel when it leaves its hangar for the first time later this month ahead of its maiden test flight.

The 302ft (92m) long Airlander 10 is expected to take to the air later this summer to conduct a series of six flights to demonstrate its technology.

Hybrid Air Vehicles, the company behind the aircraft, has revealed details of the routes and maneuvers that will be used to put the giant hybrid airship through its paces.

It will fly over the Cardington area of Bedfordshire, England, just to the east of the M1 corridor and west of the A1. 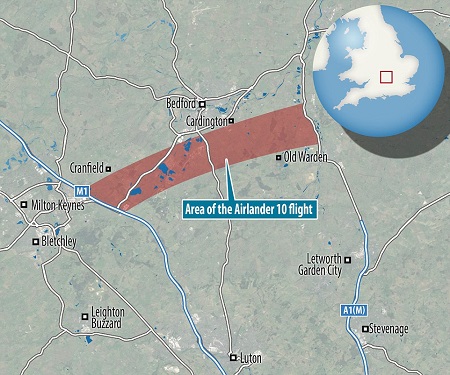 The first test flight of the Airlander 10 will take place over the Cardington region between the M1 motorway and the A1(M).
Source: Daily Mail

The trials will include tests of the controls, electrical systems, airspeed calibration and to examine how it performs in real life conditions.

A second phase of tests, which will need to be approved by regulators, will see the Airlander 10 travel up to 86 miles and up to altitudes of 10,000 feet at speeds of 69 mph (60 knots).

David Burns, chief test pilot at Hybrid Air Vehicles, said: ‘Although we have flown many hours in our ground simulator to look at all of these areas, we need good flight data to confirm the predicted performance and behavior of the aircraft.

‘During all the flying, the ground team will be receiving data from over 1000 different sensors sampled many times per second on board the aircraft.

‘These are then received in the specially converted trial’s bus, for real-time display and monitoring of the Airlander’s performance and behavior.

‘After all the data from these first flights has been analyzed and reports written and submitted to our regulators, we move on to the second phase of trials, which will see Airlander travel much further afield.’ 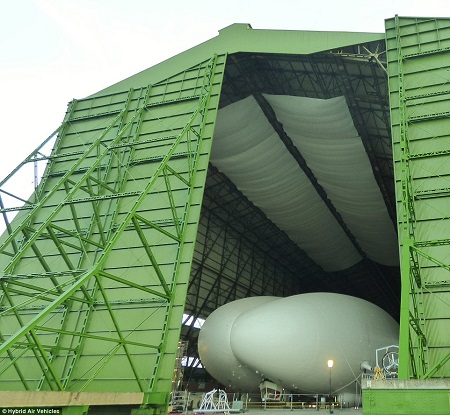 The giant aircraft, which is the largest in the world, is due to leave its enormous First World War hangar in Bedfordshire for the first time since having its engines fitted.
Source: Daily Mail

The craft has already undergone a successful hover test, with the hull being filled with helium and floated outside the aircraft hangar in November, but this will be the first flight since the engines were successfully attached.

The exact date of the test flight has not been announced but if successful, an aircraft based on this prototype will go into production.

Before leaving the hangar later this month, the airship will have to undergo a ‘drop test’ where it will be lifted and allowed to fall to the floor to test out its skid system undercarriage – which will work like the undercarriage of a traditional airplane, is robust enough to let it cope with the completed aircraft’s weight.

In a newsletter on the progress of the project, Nick Allman, program director at Hybrid Air Vehicles, said: ‘We will shortly exit the hangar – depending on the weather – and we will begin the final phase of ground testing, undertaking tests such as running all four engines on full power, which for safety reasons cannot be done inside.

‘When complete, Airlander is then ready to embark on her first flight and the rest of the flight test program.

‘We have made fantastic progress over the past few months and this is going to be a truly exciting and game-changing summer for the aviation industry.’

The concept behind the aircraft to combine the lighter than air technology used in airships with the aerodynamic lift seen in airplanes, allowing it to travel large distances with relatively little fuel and set down without the need for large scale runways.

Earlier this year Hybrid Air Vehicles announced it has received the two key documents it needs before conducting its test flight – a flight conditions approval certificate from the European Aviation Safety Agency and a permit to fly from the UK’s Civil Aviation Authority.

A statement released by Hybrid Air Vehicles said: ‘Flight is now authorized once it has completed the agreed ground-testing and associated documentation.

The super-strong hull material was designed by Warwick Mills and assembled by ILC Dover, the company that makes NASA spacesuits.

It uses a woven fabric for strength on the inside, and a Tedlar layer to lower how flammable the coatings are, around a Mylar film to retain the helium.

‘The very latest materials, which are both strong and light, are used throughout the manufacture of our cutting-edge Airlander 10, ranging from the bespoke hull fabric to the mainly carbon composite Mission Module, Fuel Module, Ducts and engine support battens,’ continued the firm.

‘We produce less noise, less pollution, have a lower carbon footprint than conventional aircraft, and have longer endurance and better cargo-carrying capacity than any other flying vehicle.’

The Airlander’s power comes from four 350hp, four-liter V8 diesel engines – two mounted at the front and two at the back.

The Airlander’s base at Cardington is the historic home of the Royal Airship Works, set up in 1919 to build R101 airships in a failed attempt to damage German dominance of the industry. 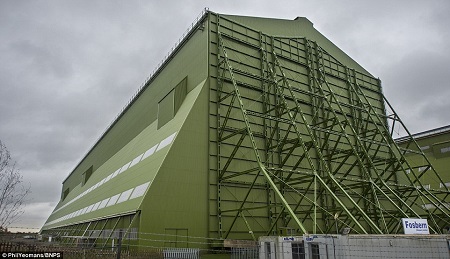 The Airlander’s base at Cardington s the historic home of the Royal Airship Works, set up in 1919 to build R101 airships.
Source: Daily Mail

The R101 was built by British authorities as a challenge to Germany’s Zeppelin program.
Source: Daily Mail 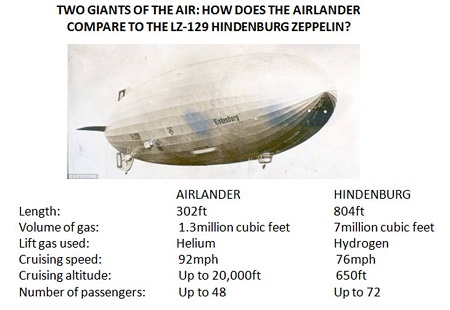