Posted on July 4, 2016 by LighterThanAirSociety 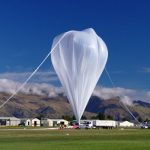 The latest and largest pressurized balloon to be launched by NASA has set a record for endurance: the longest mid-latitude flight by a large scientific balloon.

Packing 532,000 cubic meters of helium and measuring 114 meters in diameter, the balloon circled the Southern Hemisphere for 46 days, lofting a gamma ray telescope to the edges of space. Nightly dips in altitude forced a premature end to the voyage yesterday, but the flight still marks a milestone in NASA’s efforts to develop so-called super-pressure balloons as a low-cost alternative to satellites.

For decades, conventional “zero-pressure” balloons have given researchers a high-altitude platform for studying atmospheric chemistry, the cosmic microwave background (CMB), and many other phenomena. But at temperate latitudes, the endurance of conventional balloons is limited. During the daytime, sunlight heats the helium, causing the gas to expand and leak. At night, the balloon cools and must drop ballast to avoid drifting too low. Zero-pressure balloons can only achieve long flights during summertime near the poles, when constant daylight allows them to stay afloat for weeks at a time. 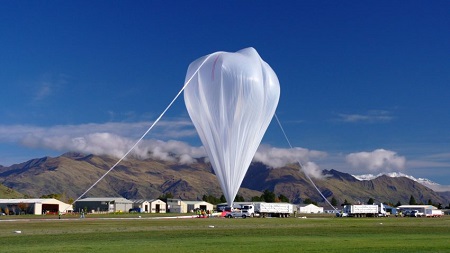 Super-pressure balloons promise to bring that endurance to temperate latitudes, opening new phenomena to observation. Their helium is pressurized; because their volume doesn’t change as they are heated or cooled over the course of the day, they can remain at a constant altitude and don’t need to shed gas or ballast. Over the past decade, NASA has launched ever larger and more ambitious super-pressure balloons, clocking mid-latitude flights of up to 32 days.

On 17 May, the agency launched its latest model from Wanaka, New Zealand. The balloon’s flight path during the long austral nights and short days was as erratic as a zero-pressure balloon’s: It dipped as much as 10 kilometers nightly from its cruising altitude of about 33 kilometers, possibly because of a helium leak that later closed back up. And rather than circling the Southern Ocean for 100 days as intended, the balloon veered off over the South Pacific after just one circumnavigation, having slipped out of the winter cyclone winds that circle Antarctica. “Mother Nature is in charge of our business,” says NASA Balloon Program Office Chief Debora Fairbrother in Greenbelt, Maryland. “She truly has been exercising her rights.”

Yesterday, NASA brought the balloon down near the coast of Peru, 32 kilometers north of the town of Camaná. Plans are already underway to retrieve the balloon and its payload from the mountainous area. Careful study of the balloon may help NASA avoid the same altitude dips in future flights. Still, the wayward balloon hauled in some novel astrophysical data. It carried the Compton Spectrometer and Imager (COSI), a gamma ray telescope that aims primarily to probe how elements are forged in supernovae. COSI observed the gamma rays emitted by radioactive nuclei in the supernova debris, and may be able to measure their polarization—observations that are hard to make from the poles because of background gamma radiation from cosmic rays channeled toward the poles by Earth’s magnetic field.

COSI, a lightweight instrument designed for superballoon flight, was capable of sending data back in real time in case it couldn’t be recovered. Besides studying supernovae and other gamma sources, the telescope’s long flight allowed it to detect a bright gamma ray burst, says lead COSI investigator Steven Boggs, an astrophysicist at the University of California, Berkeley. “You have to be in the right place at the right time to catch [gamma ray bursts].”

Stratospheric balloon observations have limitations. For research that produces very high volumes of data, such as studies of the CMB, “we have to store all the data on-board,” says Shaul Hanany, an astrophysicist at the University of Minnesota, Twin Cities. Such research will have to wait for super-pressure balloons to prove their reliability—that they and their payloads won’t be lost in the ocean.

Still, NASA has a full slate of super-pressure balloon missions lined up in the coming years, studying phenomena ranging from dark matter to cosmic rays. “I would be overjoyed if I had a telescope on this balloon,” says Eliot Young, a planetary scientist at the Southwest Research Institute in San Antonio, Texas. As more super-pressure balloon projects produce useful data, he says, “everyone is going to realize it’s a great opportunity.” 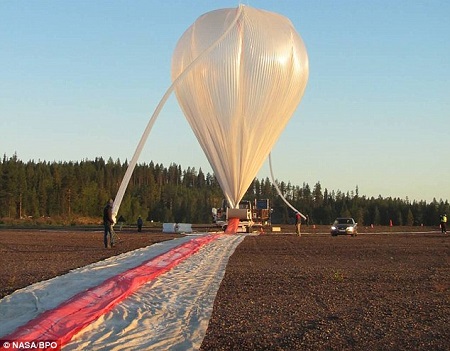 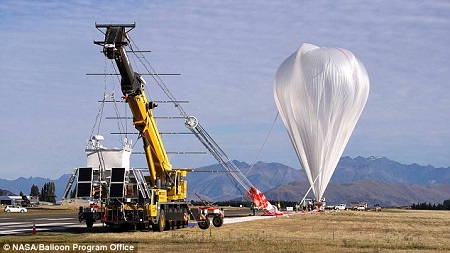 The NASA Super Pressure Balloon shown just before launch from Wanaka, New Zealand. The balloon took off from New Zealand on 16 May and landed in Peru on Saturday.
Source: DailyMail.co.uk 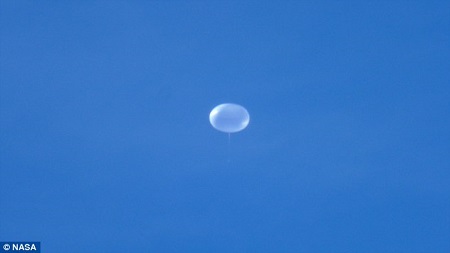 The super pressure balloon is different to other balloons because it uses pressurised helium to keep it afloat. The team is hoping the 18.8-million-cubic-foot (532,000-cubic-metre) balloon will eventually fly for 100 days at a time.
Source: DailyMail.co.uk 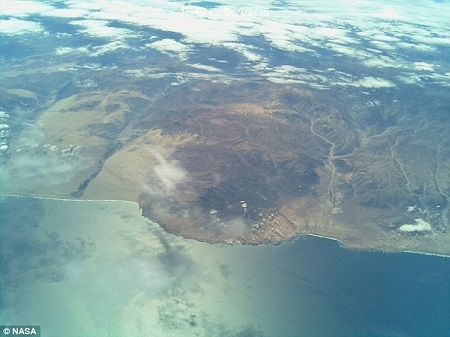 The coastline of Peru as seen from NASA’s Super Pressure Balloon just before the conclusion of the balloon mission. The balloon payload touched down north of the Camana, Peru, at 3:54 p.m. EDT, Saturday, July 2.
Source: DailyMail.co.uk