AAIB investigation to HAV Airlander 10, G-PHRG

Posted on March 13, 2017 by LighterThanAirSociety 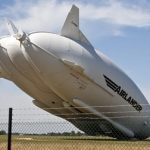 At the end of a test flight the aircraft could not be secured to its mooring mast because of a fault in winching apparatus at the mast. The aircraft departed again while the issue was investigated. As it did so the mooring line, which had been secured temporarily, fell free until it hung to its full length below the aircraft. The second approach therefore had to be higher than ideal, which resulted in the aircraft arriving over the landing site at an excessive height.

The test pilot attempted to maneuver the aircraft in order to bring the mooring line within reach of the ground crew, but in so doing, it unexpectedly adopted an exaggerated nose down attitude and began to descend. The pilot was unable to affect a recovery before the aircraft struck the ground, causing damage to the cabin flight deck area.