Clouds in a Bag: 18th and 19th Century Ballooning on Display at the Udvar-Hazy Center

Posted on March 9, 2017 by LighterThanAirSociety 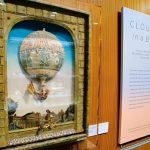 A sheep, a rooster and a duck go for a balloon ride.

That was the scene at Versailles on Sept. 19, 1783. Placed in a wicker crate, the animals were the first living creatures ever to fly when Joseph and Jacques Montgolfier demonstrated their new invention: the hot air balloon.

“People had climbed mountains, so they knew that when you got to the top of a mountain there was still air to breathe,” said Dr. Tom Crouch, fount of aeronautical knowledge and curator of the National Air and Space Museum’s new exhibit, “Clouds in a Bag: The Evelyn Way Kendall Ballooning and Early Aviation Collection,” at the Steven F. Udvar-Hazy Center.

Crouch continued, “But maybe if you left the surface of the earth there would be a problem. So [the Montgolfiers] did this, just to make sure that living creatures could breathe up there.” 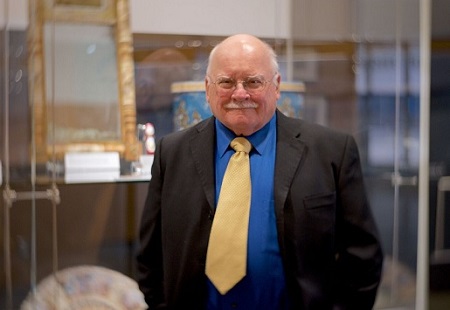 “They were paper manufacturers, and Joseph Montgolfier had the notion of filling a paper bag full of hot air, and would later say that it was like putting a cloud in a paper bag,” Crouch said in an interview with the Times-Mirror.

When the news of the Montgolfier balloon spread from their home in Annonay in the south of France, “there really was a huge wave of excitement. People had been waiting for millennia to see human beings fly,” Crouch said.

And so began what the curator and his team refer to as “Balloonania.” The Evelyn Way Kendall collection holds a total of 1,700 items of early balloon memorabilia, from prints and paintings, to ladies fans, to plates, to shadow boxes, snuff boxes, patch boxes, and band boxes for gentlemen’s shirt collars. “You could put a balloon scene on any kind of small thing and they would sell like hot cakes, just fly off the shelves,” Crouch said. “This was really a peak in early consumer culture, and it speaks to how people were just fascinated by the balloons. They really captured people’s imaginations.”

The exhibit begins with a case of these of small things and then runs down a long gallery wall filled with prints and paintings. “We really struggled with what to put in first,” Crouch said. 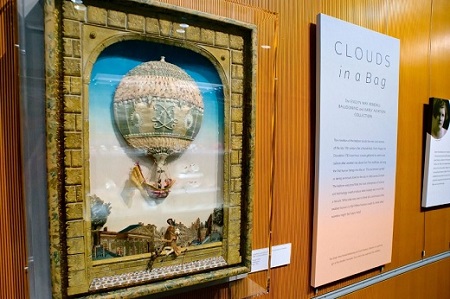 The exhibit will run at the Udvar–Hazy Center for two years, during which they will switch out items in the exhibit with others in the collection. This way, the conservators can work on the artifacts and protect the prints from fading.

The exhibit moves down the hallway in chronological order, starting with pre-1783 notions of buoyant flight through the first balloons to fly in Annonay and Paris. There are depictions of the first great aeronauts, who would draw huge crowds to see their daring, balloon-based stunts. Then there is a section of satirical balloon cartoons.

As with any groundbreaking invention, there were those who poked fun. One cartoon shows a balloon taxi to the moon.

And then there’s militarization. One painting shows Thaddeus Lowe’s Union Balloon Corps setting up near a battlefield in Virginia during the Civil War.

But even with the battlefield balloons, everything on display holds on to the sense of whimsy and wonder that first drove people to fly balloons.

In August 1783, the first balloon flew over Paris, a hydrogen balloon built by Jacques Charles.

“A huge crowd showed up,” Crouch said. “It was in all the papers. Benjamin Franklin was there, and he heard someone in the crowd say, ‘So they made this thing fly, of what use that ever going to be?’ Franklin leaned out of his carriage and said, ‘Sir, of what use is a new born babe?’”

Across from the gallery wall is a big row of windows looking into the Udvar-Hazy Center’s restoration hangar. Visitors can look at scenes of people—and critters—flying into the sky for the first time and see conservators preserving aircraft and spacecraft, including the Apollo 11 Command Module Columbia, the spacecraft that carried astronauts to the moon and back.

Steven F. Udvar-Hazy Center’s regular hours are 10 a.m. to 5:30 p.m. To learn more about the Clouds in a Bag exhibit, and other exhibits at the National Air and Space Museum, visit their website at http://www.airandspace.si.edu