Zeppelin Gets a Visit from a Little Brother 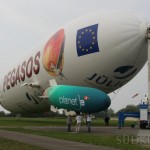 A ZDF crew films in Friedrichshafen for a documentary on the Rhine. With a ten-meter long blimp they made completely new aerial photography of the river. Highlight of the shoot was the visit of the Mini-Zeppelin with its big brother, the Zeppelin NT in Friedrichshafen.

Actually, the ZDF (Zweites Deutsches Fernsehen – Second German Television) Mini-Zeppelin is “only” a blimp – also, it is “only” ten meters (33 ft.) long. Nevertheless, for the film crew it was one of the highlights of their assignment, as their small airship met its big brother, the real Zeppelin NT, in Friedrichshafen. 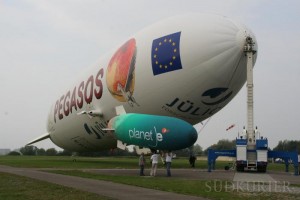 Little Brother next to his Mentor and Big Brother

“We would have liked for the two airships to fly together”, says director Andrew Ewels. But it was too windy – both airships had to stay on the ground. The films are for a two-part TV documentary. The film crew had been traveling for four weeks with its Zeppelin and had filmed the Rhine. What makes this TV movie special is the high resolution camera mounted directly below the ZDF blimp which provided wonderful images of the Rhine from the air.

Of course, the river has been filmed from helicopters and airplanes many times, but not with a blimp. “The advantage is that a Zeppelin can make flight maneuvers cannot be made by helicopter. Flying only one meter (3 ft.) above the ground, climb, fly and fall, as one might like, turn on the spot or slowly glide, completely silent – a dream for a filmmaker”, says director Ewels.

For the production of “Adventure Rhine”, ZDF borrowed the Zeppelin from Guntram Froebel, who had already loaned it to them five years ago, to make extraordinary aerial photography. For two years, the 39-year old tinkered with the mini-blimp. “Everything on it is a custom product, I developed almost everything myself”, he explains. Froebel worked as a blimp operator during the four-week filming for ZDF. 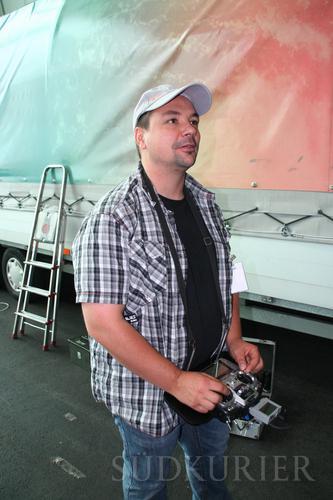 The mini-blimp is radio controlled

The blimp flew the entire length Rhine, from its source in Switzerland to Rotterdam. (The river flows into southern Lake Constance and flows out at its northern end.) Unique recordings were created of the 1,230 km (764 miles) long river. “Almost everyone in Germany knows the Rhine, many have a connection to it,” says Ewels. The Zeppelin with its film crew could capture the all-new, never before seen perspectives. On the ground, the team then filmed 16 stories revolving around the people, nature and animals on the Rhine, gold miners in the city of Freiburg, the last eel fishermen in Kalkar or the Swiss gamekeepers in search of mountain goats. 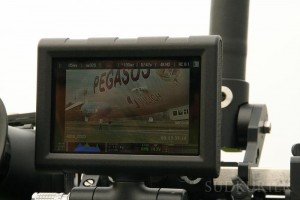 None of the stories takes place in Friedrichshafen, but that the small blimp would visit the real Zeppelin NT was a “must do” from the start. “That was clear, these pictures could not be missed”, the director says, laughing. And the Zeppelin Luftschifftechnik staff was thrilled with the idea from the start. So it happened – the meeting of the two unequal Zeppelins – beautiful images of that are worth seeing, for sure.

Click here to see a picture gallery of the two airships in Friedrichshafen.