Up, up and away: Wonderful success story of the British balloon factory that can build all sorts

Posted on May 9, 2013 by LighterThanAirSociety 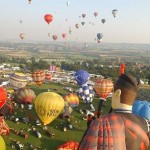 – Company was started by Donald Cameron, 73, who made western Europe’s first ever modern hot air balloon in 1967

– Small balloon is made from 1,000 square meters of fabric and three kilometers of thread

This is the amazing collection of the world’s most wonderful hot air balloons – and it includes everything from Coca Cola bottles to space shuttles and polar bears.

They are all produced by Cameron Balloons, in Bristol, who make between 150 and 200 every year as the world’s leading hot air balloon company.

The company is owned by Scottish aeronautical engineer Donald Cameron, 73, who designed and flew Western Europe’s first modern hot air balloon in 1967 with a group of friends at the Bristol Gliding Club. 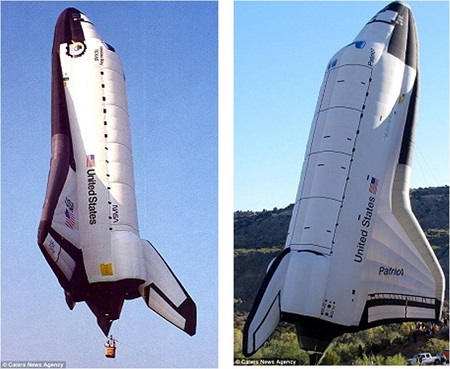 One small step for man, to create one giant hot air balloon: A replica of a NASA space shuttle which was created by Cameron Balloons in Bristol

They carried out their first test flight at the Weston on the Green RAF base in Oxfordshire, and Mr. Cameron was hooked. Within four years he had quit his job as an engineer and started designing balloons full time.

Now his company employs 67 people and they produce an incredible selection of balloons which they sell around the world. His daughter Hannah Cameron is one of the company’s directors.

The company was even responsible for the Breitling Orbiter 3 – the first balloon to fly around the world non-stop in 1999. 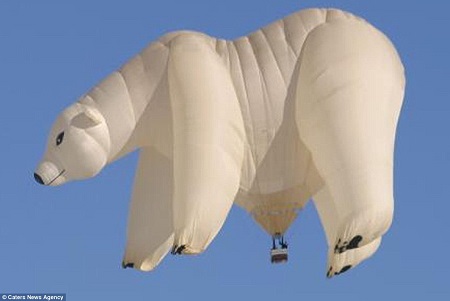 Custom design: A hot air balloon designed to look like a polar bear which was created by Cameron Balloons. A balloon like this is made out of around 3,000 square meters of fabric 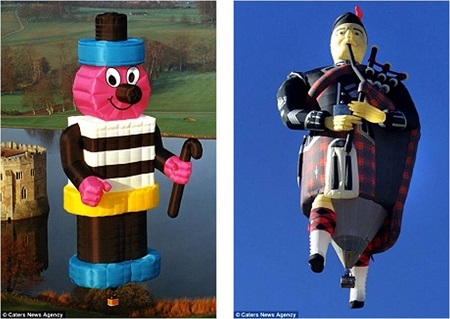 Wacky creation: A Bertie Bassett Liquorice Man, left. With the basket it stands at 51 meters tall and the fabric used would make up to 1,340 suits. Right is a custom-designed Scottish-piper balloon

Over the years they have created balloons designed to look like shopping trolleys, newspapers, Darth Vader, Thomas the Tank engine, a Harley Davidson and the FA Cup for clients.

A recent Ben & Jerry’s ice cream cone that they created measures 28.5 meters tall when fully-inflated and 21.4 meters across at its widest point. In total, it required 3,809 square meters of fabric.

If the area inside was to be filled with ice cream, it would take 2.3million kilograms of the tasty treat to fill it up.

The creations take around 12 weeks complete from the day the order is placed to when it is ready to fly. 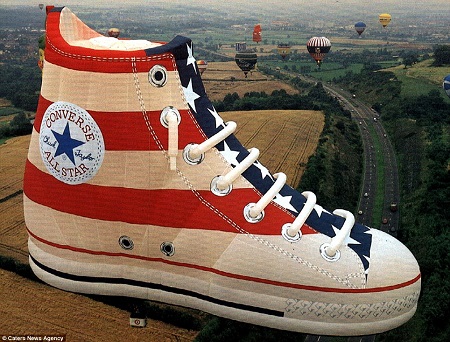 Bigfoot: This balloon is designed to look like a shoe, and has each of the laces fitted. The tiny weaved basket can be seen underneath 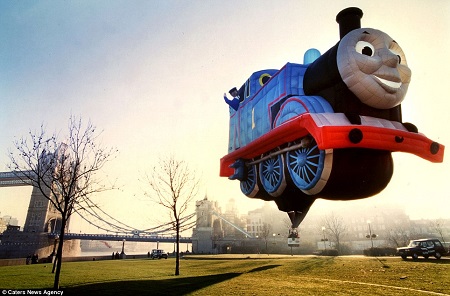 Children’s’ favorite: A Thomas the Tank Engine balloon designed by Cameron Balloons takes off at daybreak near Tower Bridge in central London 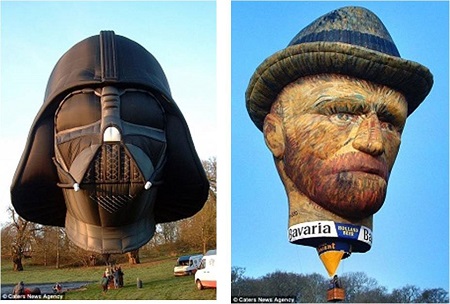 Terrifying: A Darth Vader balloon gets ready for takeoff, left, while this is the face of a Van Gogh made for a Dutch beer company, right

The company’s cheapest balloons are designed to hold three or four people and cost £20,000 but the high-end custom models are priced at in excess of £50,000.

Hannah Cameron, director, said that a team of 16 people work on each of the projects.

‘The first thing we do is hold a face-to-face meeting with the person who is buying the balloon to find out exactly what they want and exactly what colours they want us to use,’ she said. 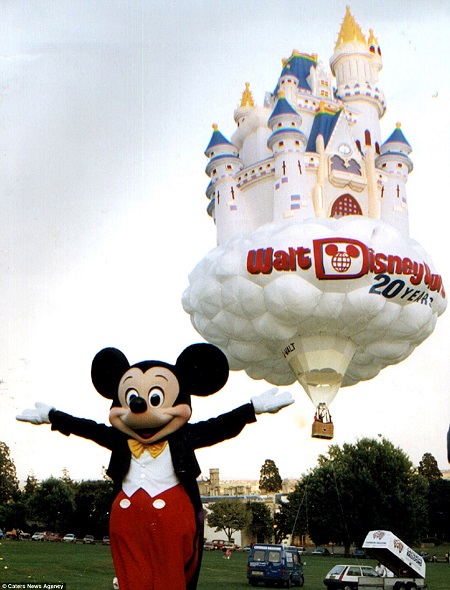 ‘The next stage is production. The bulk of the balloon is made from rip-stop nylon which is a very lightweight material. Some specialist fabrics are used at the mouth and at the top of the balloon.

‘During the production process we use everything from a pair of scissors through to specialist cutting equipment. It takes 16 of our staff about 12 weeks to produce a balloon.’

A basic model will use about 1,000 square meters of fabric and three kilometers of thread – although more specialist models use three times as much.

Cameron Balloons, based in Bedminster, Bristol, are the world’s largest balloon manufacturer. 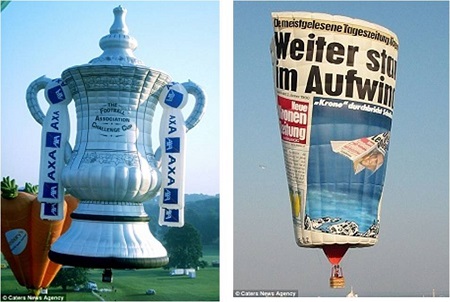 Up for the cup: A 38 meter tall model of the FA Cup which is made out of 3,664 meters of fabric and would cover over half the Wembley pitch if it was flattened (left) and (right) a newspaper is turned into a hot air balloon 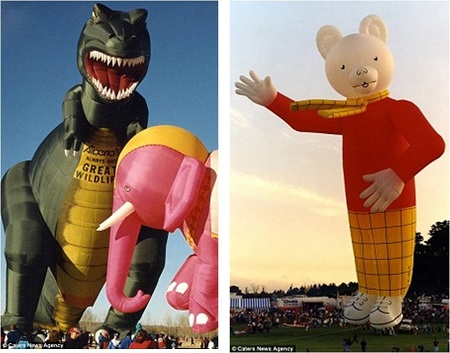 Terrifying! A T-Rex style hot air balloon which is so intricately designed that each of its teeth are filled with air and inflated as well (left) and children’s favorite Rupert the Bear (right)

For founder Mr. Cameron, it all began in July 1967 when his first balloon – the red and white striped Bristol Belle – took off from Weston on the Green.

His daughter Hannah said: ‘My father enjoyed gliding and he had heard of a balloon being used in the military in the US and he wrote off to them. A man who had flown it wrote back to him about it.

‘He thought it would be fun to make one of them and learn to fly it over here. So applying what he had been told and some good science he created one for himself.

‘At the time there were no hot air balloons in Europe so the story caused a sensation.’ 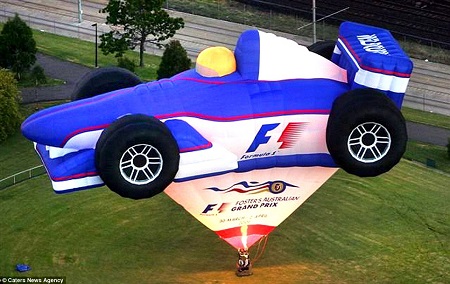 Remarkable: A balloon designed to look like a Formula One Car which was created by the Bristol-based company for the Australian Grand Prix. Around 85 per cent of the balloons made by the British company are exported 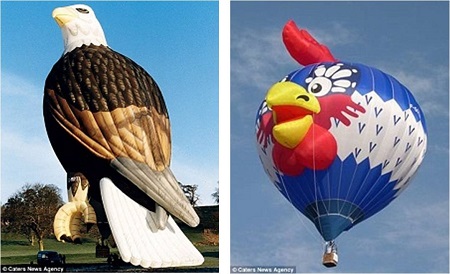 Two very different birds: The company produces between 150 and 200 balloons a year – including this Eagle, left, and an Angry Bird balloon, right 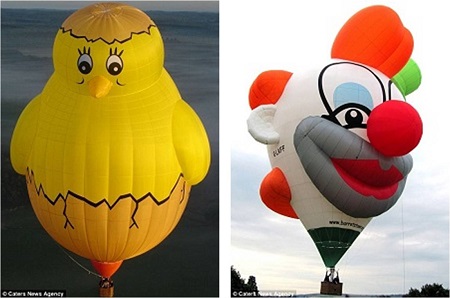 Weird creations: They have made all types of balloons – from world-record-breaking balloons – to weird and wacky shapes, film characters, space shuttles and even an upside-down balloon 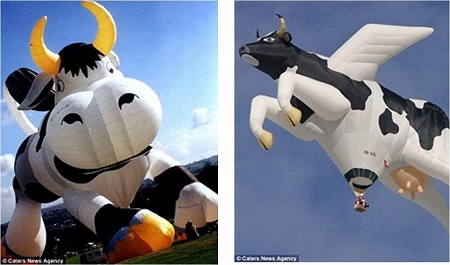 Udderly incredible: A winged cow floats through the sky (right). This is one of the Bristol-based company’s most wacky creations 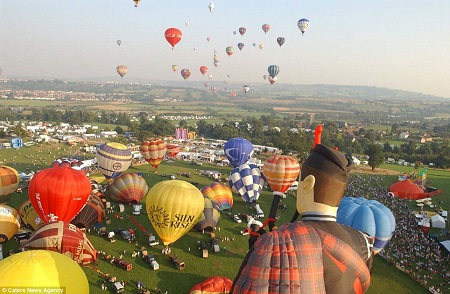 Balloons over Bristol: The Sky above Bristol is a sea of colour during the annual ballooning festival held every August

The balloon was made out of rip-stock nylon – just as modern ones are today – and is still kept in the Cameron Balloons headquarters.

Ms Cameron said: ‘Ballooning is one of these amazing things. Even a straightforward balloon – people will stop and wave, and take photographs.

‘It’s the best way to fly. The views from a balloon are incredible – you can see for miles and miles.

‘I’ve been flying since I was three-years-old and it’s much more interesting than flying in a plane. There’s a bit of chance to it as well – you’re never quite sure where you’re going to end up. 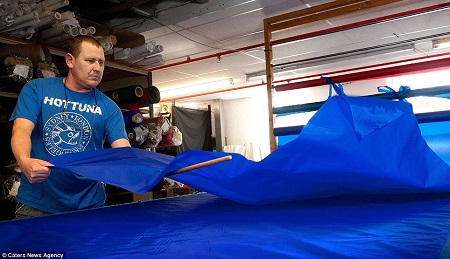 Measured approach: The material is selected for the latest hot air balloon to roll off the Bristol production line. The bulk of each balloon is made out of lightweight rip-stock nylon 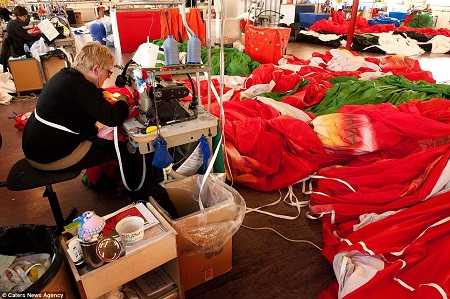 Stitch-up: A woman uses a sewing machine to stitch together the panels of fabric which will make up a balloon. Even a small one uses three kilometers of stitching

She said that the company has produced some amazing models over the years.

‘One of my favorite ones is the Tyrannosaurus Rex. When it’s inflating or landing you can be chomped by its teeth. We’ve done all sorts, from a full Scottish pipe major, a light bulb, Disney castles and UFOs.

‘The hard ones to design are the very tall and slim ones or the slim horizontal ones. You need to bulk them out to get more volume, without compromising the design.

‘A Coke bottle is technically hard to do – as it’s tall and thin, you have to make the balloon so big to counteract that, while still being true to the customer’s wishes.’

Production process: One of the member’s of staff works on a new wicker basket for one of the smaller balloons which holds around three people (left) while a woman works on the sewing machine (right) 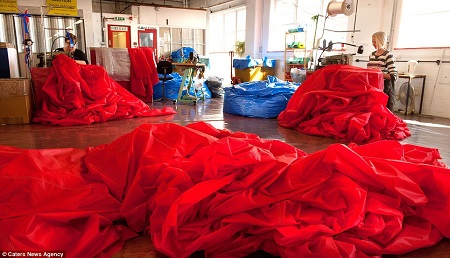 Production: Two workers in the factory in Bedminster, Bristol, at work on their sewing machines 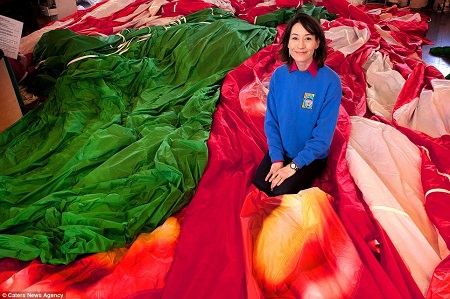 Family firm: Hannah Cameron, director at Cameron Balloons, with the fabric the company use. Her father Donald, a Scottish aeronautical engineer, created the company

This entry was posted in Uncategorized and tagged Cameron balloons, Hot air balloons. Bookmark the permalink.