Posted on May 21, 2013 by LighterThanAirSociety 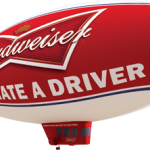 On May 22, Budweiser’s first-ever responsible-drinking blimp will begin its official maiden voyage. The airship, which carries the “Designate a Driver” message, will embark on a 17-week tour across much of the country, following a send-off in St. Louis. The blimp’s flight plan includes 25 stops, many of which coincide with major festivals, outdoor celebrations and sporting events in tour cities.

“With summer on the horizon, we’re all finding more reasons to celebrate,” said Kathy Casso, vice president of Corporate Social Responsibility for Anheuser-Busch. “The Budweiser Designate a Driver blimp gives us a unique opportunity to reach adults at outdoor events while they’re enjoying our beers. Our message is simple: However you get home, designate a driver.”

Consumers 21 and older can follow the Budweiser Designate a Driver blimp on Twitter with @budblimp throughout the tour and tweet photos of the vessel in their city using the hash tag #ddblimp. Adults can also log on to www.budblimp.com to pledge to drink responsibly and always designate a driver, and then share their pledge through Facebook to encourage friends to do the same. 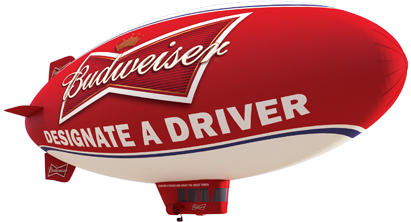 The blimp is currently scheduled to visit the following cities*:

The 130-foot airship can reach a top speed of 50 miles per hour but typically cruises at between 30 and 35 miles per hour at an altitude of 1,000 feet. It requires more than 69,000 cubic feet of helium to fully inflate the American-made blimp, and it takes a crew of 13, including a pilot, to operate and transport the airship throughout the tour. Approximately 5 million 12-ounce cans of Budweiser beer could fit inside the airship’s envelope.

“It’s been more than 10 years since a Budweiser blimp has taken flight, so when adults see our Designate a Driver blimp, we hope they’ll take our message to heart and either volunteer to be or use  a designated driver,” Casso added.

Consumers who take the pledge at BudBlimp.com will also be entered to win** a trip for two to the Budweiser Made In America music festival (August 31-September 1), which includes a blimp ride (weather-permitting) over the festival grounds.

The Budweiser Designate a Driver airship will end its tour in St. Louis on September 20 to commemorate Global Be(er) Responsible Day, an annual Anheuser-Busch event dedicated to promoting responsible drinking – including the use of designated drivers.

About Anheuser-Busch Anheuser-Busch and its employees build on a legacy of corporate social responsibility by focusing on three key areas: promoting alcohol responsibility, preserving and protecting the environment and supporting local communities. In the past three decades, Anheuser-Busch and its wholesalers have committed more than $980 million in national advertising campaigns and community-based programs to encourage responsible drinking and prevent underage drinking and drunk driving. Anheuser-Busch reduced total water use at its breweries by 40 percent in the last five years and the company has been a leading aluminum recycler for more than 30 years. Since 1997, Anheuser-Busch and its Foundation have invested in local communities through donations of nearly $515 million to charitable organizations. The company also has provided more than 72 million cans of drinking water to people impacted by natural and other disasters since 1988. Based in St. Louis, Anheuser-Busch, the leading American brewer, is a wholly-owned subsidiary of Anheuser-Busch InBev, the leading global brewer, and continues to operate under the Anheuser-Busch name and logo. For more information, visit www.anheuser-busch.com.

This entry was posted in Blimps, Uncategorized and tagged blimp, Budweiser.Designate a Driver. Bookmark the permalink.