Posted on May 8, 2013 by LighterThanAirSociety 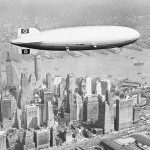 Chilling footage of the Nazi swastika flying over the New York skyline has emerged in a new video of the doomed Hindenburg airship.

The massive aircraft – about three times longer and twice as tall as a Boeing 747 – was destroyed in an inferno at a New Jersey airfield on May 6, 1937, that killed 35 people.

But the newsreel footage, flagged up by the Public Domain Review, shows the ship passing over Manhattan as well the huge fire that destroyed confidence in the luxurious mode of transport. 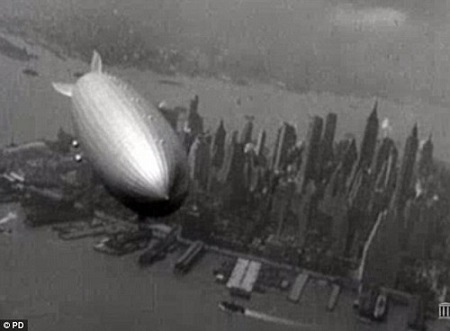 Final flight: The huge zeppelin passes over lower Manhattan in May 1937. Only hours later it would be destroyed in a shocking inferno 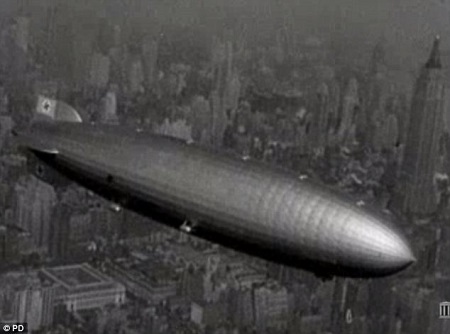 Hours from destruction: The giant sails past the Empire State Building on the way to the disaster in New Jersey, where 35 people died

The video first shows the triumphant arrival of the airship in New York on May 9, 1936, at the end of the craft’s first journey to North America – the giant had visited Brazil on its first transatlantic flight.

But it is an eerie sensation as the huge craft, emblazoned with swastikas, is seen over familiar New York sights like Empire State Building and Central Park.

The footage then reveals the usual docking procedure of the Hindenburg at the Lakehurst Naval Station, New Jersey, as the craft ejects water used as ballast and travelers emerge out of the bottom of the ship.

The craft made over 30 transatlantic crossings and many believed that rigid airships were the future of air travel. 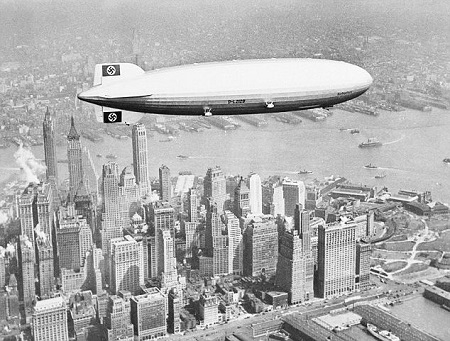 Swastikas over Manhattan: The Hindenburg flies over New York on her first visit to North America in May 1936. Past the tail of the zeppelin is the Bank of Manhattan Building and the City Service Building

But the newsreel soon jumps a year ahead to footage of the Hindenburg floating over Manhattan once again, on this occasion only hours before the disaster that shocked the world.

As the ship again tried to moor at Lakehurst the ‘fatal moment occurs’ and the craft is engulfed in flames within seconds.

Incredibly quickly, the ‘pride of Germany’ is reduced to a tangle of twisted metal. Of the 97 people on board (36 passengers and 61 crew), 63 survived. Thirty-five people perished, including one worker on the ground.

Debate still rages about what caused the fire – whether sabotage, engine failure, static electricity or a range of other hypotheses.

Video of the disaster was seen around the world and confidence was shattered in airships as a mode of passenger transport ever.

This entry was posted in Uncategorized and tagged Hindenburg. Bookmark the permalink.