Posted on July 24, 2012 by LighterThanAirSociety

The New Zealand 2012 International Film Festival is screening a Norwegian documentary about the flight of the Italian airship Norge over the North Pole.

The following is the description of the film from the festival’s website:

The Flight of the Airship ‘Norge’ over the Arctic Ocean

“The Future belongs to the Airship!”

In 1926 Roald Amundsen, Lincoln Ellsworth and Umberto Nobile flew with 13 others in the airship Norge from Ny-Alesund at Svalbard over the North Pole to Teller in Alaska. Theirs was the first undisputed crossing of the North Pole by air. It was also the most intensely photographed of polar expeditions, with movie cameras taking in the views from the ground and from on board the airship. 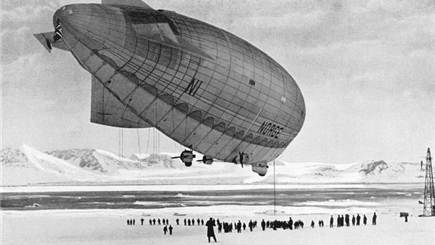 The flight, which originated with airship designer and pilot Nobile in Rome, had been touted as ‘Rome to Nome’ but bad weather forced a landing at the small settlement of Teller just short of Nome. Richard Byrd was encountered en route to and from his subsequently disputed Polar flyover. The Norwegian cameras were there all the way, and all the way home too. Hero’s welcomes await Nobile in Naples and Rome (a medal from Mussolini), and Amundsen, the first person to travel to both poles of the earth, throughout the length of Norway. This visually stunning record has been little seen in the 85 years since it first thrilled adventure-loving audiences with its still awe-inspiring images of technological triumph and spectacular vistas of the frozen North. A perfectly preserved nitrate print in the Cinématheque Suisse provided the material for this magnificent restoration by The National Library of Norway. NZIFF and the New Zealand Film Archive are delighted that they have entrusted us with a 35mm print so gleamingly fresh that you might be caught up in the wonderful modernity of it all and applaud the final uplifting title card: “The Future belongs to the Airship!”.

The film will be accompanied by pianist Nikau Palm. Nikau Palm has been playing piano for over 35 years and has accompanied many silent film screenings for The Film Archive. He loves the unusual discipline of playing for film: “it relates so closely to my work as an accompanist for ballet and dance. Having to watch the action and match moves to the music, it’s remarkably similar.”