Posted on July 25, 2012 by LighterThanAirSociety 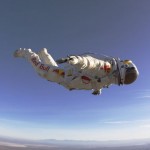 On Wednesday, Baumgartner took another stratospheric leap, this time from an altitude of more than 18 miles (29 kms) — an estimated 96,640 feet, nearly three times higher than cruising jetliners. He landed safely near Roswell, N.M. His top speed was an estimated 536 mph (863 km/h , 0.8 Mach), said Brian Utley, an official observer on site.

It’s the second test jump for Baumgartner from such extreme heights and a personal best. He’s aiming for a record-breaking jump from 125,000 feet (38,100 m), or 23 mile, in another month. He hopes to go supersonic then, breaking the speed of sound with just his body. 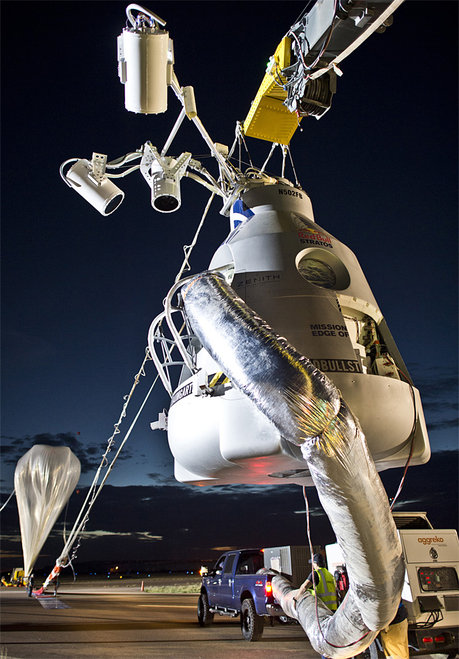 “It has always been a dream of mine,” Baumgartner said in a statement following Wednesday’s feat. “Only one more step to go.” 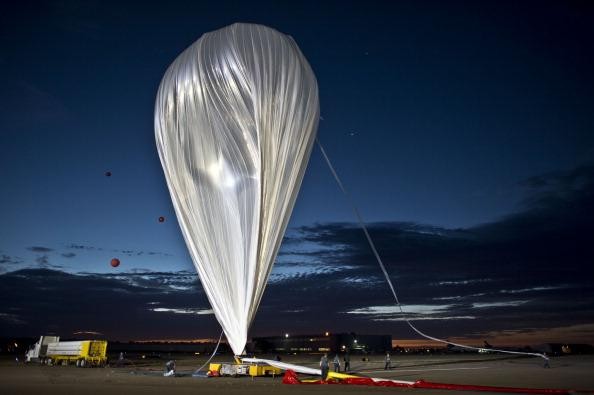 ATA crew members fill up the balloon with helium at the flight line during the second manned test flight for Red Bull Stratos on July 25, 2012 Credit: Red Bull

As he did in March, the 43-year-old Austrian ascended alone in an enclosed capsule lifted by a giant helium balloon that took off from Roswell. He wore a full-pressure suit equipped with parachutes and an oxygen supply — there’s virtually no atmosphere that far up.

It took about 1½ hours to reach his target altitude. He was in free fall for an estimated three minutes and 48 seconds before opening his parachutes. 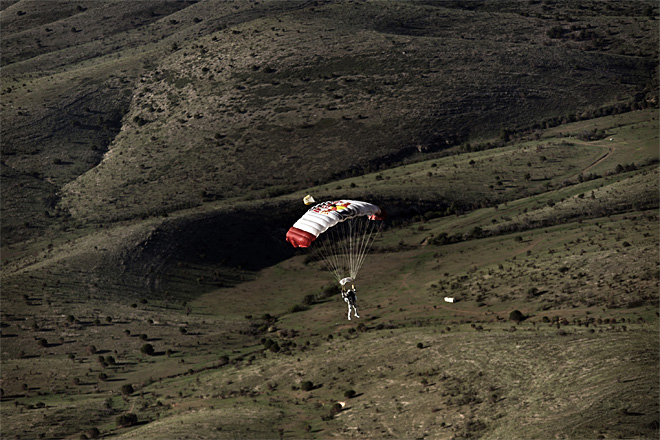 In this photo made available by Red Bull, Felix Baumgartner of Austria uses a parachute to land in the desert near Roswell, NM during the second manned test flight for Red Bull Stratos (AP Photo/Red Bull, Jorg Mitter)

“It felt completely different at 90,000 feet,” Baumgartner noted. “There is no control when you exit the capsule. There is no way to get stable.”

In March, Baumgartner jumped from 71,581 feet (21,800 m), more than 13 miles, saluting before stepping from the capsule. Bad weather earlier this week delayed the second test jump until Wednesday.

NASA is paying close attention to this Red Bull-funded project dubbed Stratos, short for stratosphere. The space agency wants to learn all it can about potential escape systems for future rocketships. 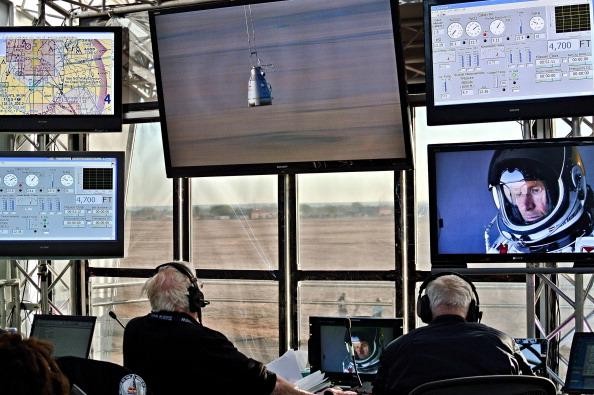 Baumgartner won’t come close to space, even on the ultimate jump that’s planned for late August or early September. Space officially begins at 100 kilometers, or 62 miles — more than 328,000 feet.

Baumgartner, a former military parachutist and extreme athlete, has jumped more than 2,500 times from planes and helicopters, as well as from skyscrapers and landmarks, including the 101-story Taipei 101 in Taiwan.

Kittinger, who turns 84 on Friday, was an Air Force captain when he made his historic jump for what was called Project Excelsior. He reached 614 mph (988 km/h, 0.9 Mach) on that dive, equivalent to Mach 0.9, just shy of the sound barrier.