Posted on July 21, 2012 by LighterThanAirSociety 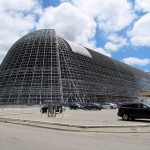 The steel frame of the historic Hangar One, the 1930s airship station at Moffett Field in Mountain View, looms like the silver bones of a giant prehistoric beast.  And for now, its future seems just about as precarious.

Within the next few days, workers will be stripping the last PCB and asbestos laden panels from the structure.  But after years of meetings and congressional hearings, efforts to preserve Hangar One  are stalled.

Lenny Siegel with the Save Hangar One Committee says the big news about Hangar One is there is no news. “There’s no money in the federal budget to re-skin it,” says Siegel  “And NASA headquarters has not even responded to a proposal by H211, a company that’s owned by the founders of Google, for them to lease the hanger in exchange for recovering it.”

The offer by H211, which is now leasing space from NASA for private jets, was seen by some as the last, best hope for coming up with the funds to restore the hangar, originally built to house the dirigible USS Macon.

Siegel still holds out hope that the committee can rally enough support to raise money for a museum and education center, but he says steps need to be taken now to make the hangar last. 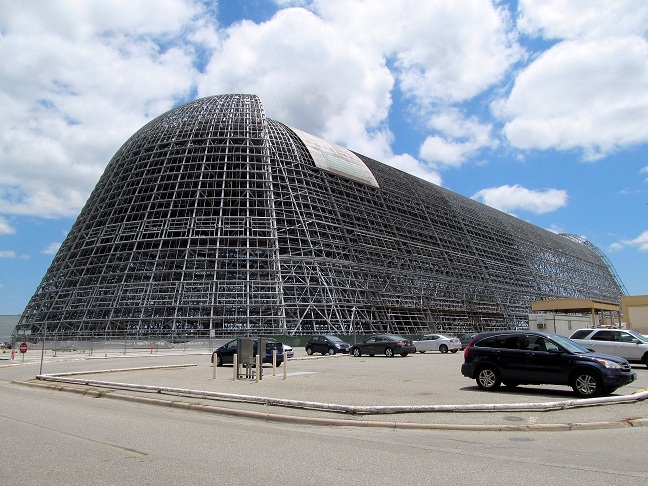 Siegel says local officials at NASA Ames are sympathetic to the idea of preserving the historic hanger, but top officials in Washington appear to be dragging their feet.

“NASA headquarters has decided to undertake a study of the future of the hanger and the runways at Moffett Field that I think will take a couple of years,” Siegel says.  “And after that, if they decide to transfer the property, it will take several years more.”

Siegel says although the hanger’s frame is structurally sound, the longer it’s exposed to the elements, the harder it will be to restore.  NASA officials did not respond to requests for comment.