Posted on June 24, 2014 by LighterThanAirSociety

In 1916, a popular American writer Mildred Cram took a tour of the Naval Aeronautic Station at Pensacola during a research visit for an upcoming book, Old Seaport Towns of the South. She marveled at the activity on board the station from the seaplanes taking off “with a staccato roar and a blinding shower of spray” to the mechanics at work “with the complex, delicate veins and arteries that move the inert body [aircraft]…out of the water to the topmost skies.”

However, perhaps the greatest impression made on her was the DN-1, the Navy’s first airship. “It had just arrived and had been tied up in its kennel, looking very much like a long, yellow dachshund. It was squashy and soft to the prodding finger, and I was surprised to find myself on intimate terms with a dirigible and saying that it felt like a ‘very old orange’…The dirigible’s kennel, to tell the truth, was more impressive—a great floating hangar, truly magnificent in proportion, which can be towed to sea and so turned with the wind that the dirigible is able to leave its shelter and to re-enter it with the utmost facility.” Ironically, given the fact that she was a civilian writing based on a first impression, Cram was quite accurate in her assessment, the floating hangar having a much longer career than the airship it housed! 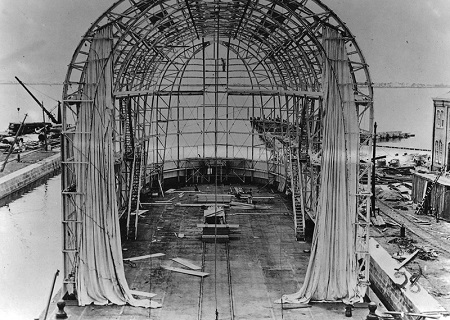 As was the case with government contracts, the Navy chose the Connecticut Aircraft Company to build the service’s airship based on the fact that it was the lowest bidder. However, even the high bidder would have been undertaking a challenge for the specifications outlined by the Navy for the DN-1 (Dirigible, Navy, Number 1) were not tried and true, particularly in the relatively limited range of experience in America’s infant aircraft manufacturing establishment. Notably and not surprising given the Navy’s emphasis on seaplanes, one specification called for the airship to be able to take-off from and land on the water. To this end, in its final configuration, the control car of the DN-1 resembled a boat.

Delays in engineering design and the procurement of materials pushed back completion of the DN-1 from the planned October 1915 date to late-1916. In the meantime, construction proceeded more quickly on the floating hangar, which took shape in the wet basin at Pensacola, corrugated metal eventually covering its skeletal framework. Large canvas curtains covered the open end of the hangar, awaiting “opening night” of the Navy’s lighter-than-air program. 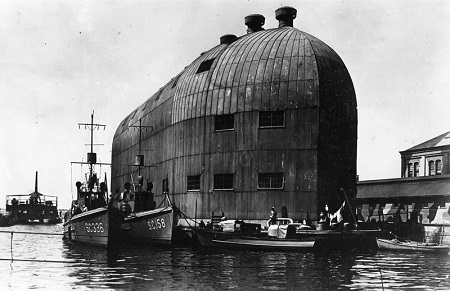 It would be a brief and inauspicious career. The DN-1 made its maiden flight at Pensacola on April 20, 1917, its time in the air revealing that the airship was overweight and its envelope leaked, the former deficiency necessitating that one of the engines be removed to save weight. Two more flights followed before the DN-1 was damaged while being towed across the bay, the determination quickly being made that it was not worth repairing.

As for the hangar, it remained in the wet basin for a time before being placed along the shore adjacent to Station Field (later renamed Chevalier Field), the first airfield on board NAS Pensacola. Soon thereafter personnel moved it ashore and it became one of the first hangars to house land planes at the air station, remaining in use into the 1920s.