Posted on July 3, 2014 by LighterThanAirSociety 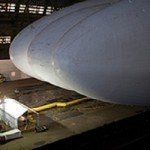 Without the boost of military funding, large airship builders look for commercial backing

Aviation is a notoriously cyclical business, but few sectors wax and wane quite as much as airships. Over the decades, interest in large airships has soared only to sink again. Most recently, the Pentagon invested hundreds of millions in the development of surveillance airships to operate unmanned for weeks over Afghanistan. But development delays, cost overruns and wind-down of the war led to their cancellation before anything could be deployed.

Airship advocates lost their latest chance to prove the vehicle’s worth. The industry has not given up and is back in the mode that has been the norm for most of its existence: looking for financial backing to prove the airship’s commercial viability beyond niches in advertising and tourism.

One of the Pentagon programs was Northrop Grumman’s Long Endurance Multi-Intelligence Vehicle, using an airship designed by the U.K.’s Hybrid Air Vehicles (HAV). The 92-meter-long (302-ft.) hybrid airship flew once in 2012. Following cancellation in 2013, HAV purchased the prototype for its scrap value and transported it to the historic airship hangars at Cardington, England, for return to flight (see photo). 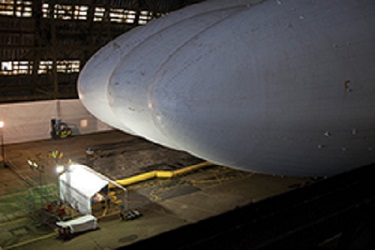 The company plans to use the HAV304 prototype as a demonstrator while it develops the commercial Airlander 50 heavy-lift hybrid airship, which is designed to carry 50 metric tons of cargo up to 2,600 nm. HAV has kicked off a U.K. government-supported research program to mature the technology needed to develop this larger vehicle from the demonstrator.

“We have a 92-meter communications/surveillance aircraft. The next stage, and bigger market, is a heavy-lift hybrid airship,” says Chris Daniels, head of partnerships. A hybrid airship is heavier than air, for easier ground handling, and uses a combination of aerodynamic, propulsive and buoyant lift to fly with less drag and more payload than a conventional airship. “The sweet spot is at least 50 [metric] tons, and 100-200 tons is where the mega-market is, so we need to take the technology we know works and . . . [develop the ability to] take off and land a lot, carry heavy things and stay in the air a long time,” he says.

The three-year £4 million ($6.8 million) Low-Carbon Technology (Locate) program is funded with £2.5 million from the U.K.’s Technology Strategy Board­—the rest to come from HAV and its partners.

The focus is on four areas. One is an air-cushion landing system that will allow the aircraft to taxi, take off and land, and reverse its operation so suction can keep the vehicle on the ground for loading and unloading.

Another is to test wind-tunnel models of the larger, 120-meter aircraft with more-powerful engines and “a hull shape that is a bit different for better lifting characteristics,” says Daniels. The other areas of research under Locate are “integration of the technologies to make sure they all work together, and how to take the aircraft to sustainable production of 30-40 a year,” he says.

HAV’s U.K. partners are the universities of Cranfield, Liverpool and Sheffield, avionics developer Blue Boar Systems and structures specialist Forward Composites. “The first stage will be to build the models for wind-tunnel testing [at Cranfield],” says Daniels. “By the end of three years, we should be building the aircraft.” HAV hopes to fly the first Airlander 50 in 2018-19.

The company plans to return the prototype to flight by early 2015, and is raising equity financing to obtain a U.K. Civil Aviation Authority permit to fly the aircraft for demonstrations. “We need 200 hours [of flight testing] to get a permit to fly,” Daniels says. “We are in discussions with more than a dozen organizations that would then fund trials of the aircraft.”

These include scientific and research institutions, defense organizations, telecommunications companies and mining businesses in Canada and Scandinavia “who want to try out their ideas and see what the aircraft can do,” he says. Currently inflated with air, the HAV304 is to be reinflated in September with the ultra-purified helium lifting gas required for flight.

HAV’s product plans are still fluid, and whether the heavy-lift Airlander 50 comes first or an Airlander 10 production version of the demonstrator has not been determined. “If we see demand as an Internet comms platform, for example, we could go for the Airlander 10 first,” he says. The company also is working to define its business model, and whether it will operate the first few airships itself or work with outside operators, lessors and maintenance companies.