Posted on July 4, 2014 by LighterThanAirSociety 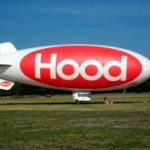 Hood®, the leading dairy brand in New England, today announced the annual return of its iconic Hood Blimp for the 2014 summer season.

New this year, the Blimp will prominently feature the Boston Red Sox logo on one side of the airship, marking the first time another logo has joined the Hood logo over the skies of New England. The joint logos mark Hood’s partnership of more than a decade with the Red Sox, along with the company’s support of the Red Sox Foundation, the official team charity of the Red Sox. 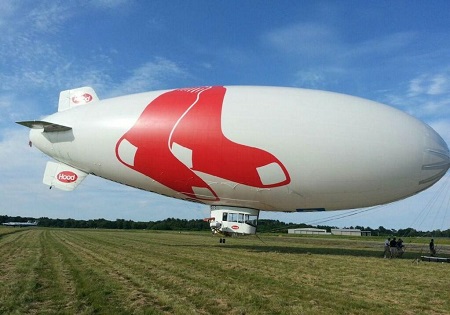 “Hood and the Red Sox are both deeply rooted in New England’s heritage,” said Lynne Bohan, vice president of communications and government affairs at Hood. “Displaying the two logos together on the Blimp is a visual way to celebrate our partnership and to promote Hood Red Sox Champions Ice Cream.”

Beginning on July 7th, consumers can enter the Hood Blimp sweepstakes by submitting a photo of the Hood Blimp on the Hood Facebook page or on Twitter using #HoodBlimpSweeps for a chance to win a variety of prizes including Red Sox memorabilia. One lucky grand prize winner will be chosen to take a ride in the Hood Blimp. To learn more about the sweepstakes and read official contest rules, visit Facebook.com/hphood. 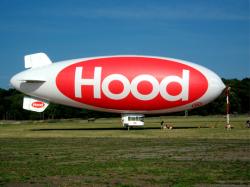 New Englanders will see the Hood Blimp flying over Fenway Park at 22 home games this season, along with a variety of events in the region from July through August. Follow the Hood Blimp on Twitter @hoodblimp for updates on scheduled appearances, bird’s eye view photos and more! To learn more about Hood, visit Hood.com and follow on Twitter @hphood.