Posted on November 7, 2011 by LighterThanAirSociety 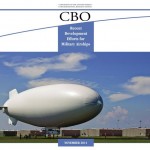 During the past decade’s operations in Afghanistan and Iraq, the U.S. military has come to rely heavily on the continuous or nearly continuous presence overhead of both manned and unmanned aircraft to support ground troops. Unmanned aircraft that remain aloft in particular locations (or “orbits”) have been primarily used to provide timely information about activities on the ground and to attack ground targets on short notice.

The demand for those so-called “persistent” or “loitering” missions has led the Air Force to substantially enlarge its fleet of unmanned aircraft, and the Army, Navy, and Marine Corps to field or plan to field similar aircraft to provide intelligence, surveillance, and reconnaissance (ISR) and light-attack capabilities of their own. Unmanned aircraft are particularly attractive for such missions because they can be designed to provide durations beyond the physical endurance of human air crews and because they do not put humans at risk during operations in potentially hostile airspace.

In light of the demand for aircraft capable of remaining aloft for long periods of time, considerable interest in airships as alternatives to conventional aircraft exists. Although unmanned airships are unproven, they have the potential to remain in the air for long periods—providing mission durations that are many times longer than would be practical for conventional aircraft. Consequently, the military services are exploring a variety of designs for unmanned airships capable of carrying ISR sensors.

The technology needed to field airships for ISR could also be applied to airships meant for airlift—that is, for the transportation of people, equipment, or other cargo. Whether airships designed to carry cargo would be manned or unmanned would depend on the specific missions they performed. Although the military services’ investment in developing airships for airlift has been limited, several private companies are exploring potential designs or are in the process of building prototypes.

In this document, the Congressional Budget Office (CBO) examines the potential capabilities of airships for ISR and airlift missions. In brief, CBO finds that:

Because the development of the technology needed for modern military airships is at an early stage, in most cases cost estimates would be highly speculative; therefore, CBO does not examine the costs of airships here. Although CBO does compare the capabilities of airships to those of other aircraft, assessing cost-effectiveness would require analyzing costs as various technologies mature.

The full report (in .pdf format) can be seen on the CBO Website by clicking here.