In Dookie (Victoria, Australia), cream of the crop sows seeds of innovation

Posted on November 7, 2011 by LighterThanAirSociety 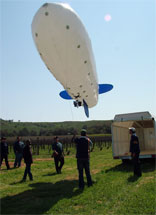 At 2246 hectares, it is bigger than most farms in Victoria. It could, in fact, be divided into many farms, for it has a piggery, dairy, 5000 sheep, 600 hectares of broadacre crops, winery and vineyard, and an orchard of apple, apricot and peach trees. Just inside the front gate is a small olive grove more than 110 years old.

But this is farmland with a difference. The farm sheds are full of tractors, trucks and other farm gear, but among them sits a bit of equipment rarely seen in a farm shed – a blimp capable of floating up to 100 meters above the fields. Not too far away from the sheds sits a motel, library and conference centre.

Welcome to Dookie agricultural college in northern Victoria, ”an experimental farm” set up in the 1800s that is now doing 21st century research and training. The property, a campus of Melbourne University, has just celebrated its 125th birthday. 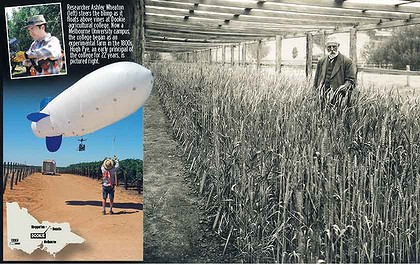 The seven-by-two meter blimp is used by viticulture lecturer Ashley Wheaton in his PhD research into irrigation efficiency. It allows him to identify water-stressed plants using thermal images taken from high above the grape vines.

While most farmers get around in a dusty ute or on a motorbike to assess crops and water needs, Mr. Wheaton’s research requires a more unusual approach. Wearing a harness, he walks around the vines and steers the helium-filled blimp. The blimp, which is tethered to the harness, carries an optical camera to take standard color photos and a thermal camera to take thermal images that indicate the amount of thermal energy radiated from the vines. The lighter the colour of the image, the hotter and more stressed the plants.

”The fundamental aim is to be able to irrigate grape vines before they get water stressed and do it in a non-contact way, with the least amount of effort but still with accuracy,” he says.

”We’re looking at using canopy temperature, or temperature of the leaves of the grape vine to tell us when the plant’s starting to get stressed and then we turn the irrigation on.”

The research project is one of many under way at Dookie, as staff and students investigate how to make agriculture more efficient and profitable. In field trials under way on dams and pools on the campus, researchers are cutting evaporation losses by adding a tiny amount of chemical to the water.

Campus director Ros Gall says that after a fall in enrolments in the university’s Bachelor of Agriculture course during the drought, there has been a big jump in the number of students expressing a preference for next year’s course. Ms Gall says the jobs outlook for students is ”great”.

”I had a meeting with a number of third-year students yesterday and I would say 80 per cent of them have been given job offers already. They’re not through their exams as yet and most of them either have a job or they’ve got an offer that they’re considering.”

Local farmer and campus manager Bill O’Connor says agriculture is crucial to people’s well-being. ”Agriculture is the business that feeds and clothes the world. Without agriculture, we will be hungry and we will be cold. If we don’t put enough resources into the agriculture industry and particularly training, it will not be long before we are cold and hungry and wondering what’s happened.”