Aerostats Rise Through the Ranks in Surveillance Service

Posted on November 14, 2011 by LighterThanAirSociety 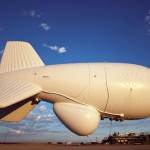 Unglamorous though they are, aerostats are carving a substantial niche in the airborne surveillance business.

They come in all sizes, from 30 feet long and a volume of 2,500 cu ft, to a massive 242 feet and 590,000 cu ft. Unlike airships, they remain tethered to the ground, but the largest ones can fly as high as 15,000 feet. Here in the Middle East region, the U.S. military has used them extensively in Iraq and Afghanistan. Gulf states, including the United Arab Emirates and Kuwait, use them to monitor borders and airspace.

“The use of aerostats by the U.S. military for persistent surveillance of war zones is gaining real traction as a cost-effective alternative to unmanned vehicles that require a significant investment,” said Lon Stroschein, vice president and general manager for the Aerostar International division of Raven Industries. This U.S. company is supplying aerostats for the latest U.S. Army program, called the Persistent Ground Surveillance System (PGSS). Such an aerostat, with a length of 80 feet and a volume of 25,000 cu ft, and carrying an L-3 Wescam Mx-15 EO/IR video camera, has an operating cost of hundreds of dollars per hour, compared to many thousands for a UAV. 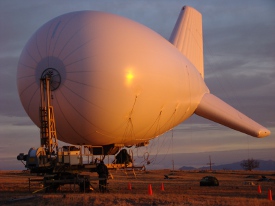 Like airships, aerostats gain their lift from helium. Their envelopes must therefore also contain separate compartments containing air and known as ballonets. As the aerostat rises and the helium expands, the air is pushed out of the ballonets through automatic valves, so that the envelope retains its original shape. The stabilizing fins of an aerostat are usually filled with air, too. Modern fabrics and laminates have provided greater strength and durability.

The mast to which an aerostat is tethered rotates so it can point into wind. Usually, it is part of a mobile mooring platform. The tether is also the power supply and carries data from the surveillance payload to the crew in a small ground station, who can launch and recover the aerostat as well as interpret and disseminate the camera surveillance data. The crew is provided with various automatic monitoring systems and can therefore detect punctures and compensate for them.

The low-pressure differential means that the lower-flying aerostats can take many hits from unfriendly fire and survive. There is usually an emergency descent method if the aerostat should break away from its tether. Aerostats come equipped with emergency locator beacons and strobe lights. High winds can be a problem, but the larger aerostats can routinely operate in up to 70 knots, and can withstand 90 knots, it is claimed.

The smallest aerostats that have been reported in military use are the most agile. The Rapidly Elevated Aerospace Platform (REAP) was first deployed by the U.S. Army in Iraq in late 2003. Designed and produced by ISL Aeronautical and Space Systems, this 2,600-cu-ft aerostat is 30 feet long and can be carried by a Humvee. It can be deployed from the back of that vehicle in only five minutes. The camera payload typically weighs 35 pounds and can be flown to 300 feet. The “ground station” is a laptop. The UAE military has also deployed the REAP system.

Moving up in size, the Rapid Aerostat Initial Deployment (RAID) system is a 10,200-cu-ft system that carries a FLIR Systems Star Safire video camera. More than 60 of these 55-foot long aerostats provided by TCOM have been deployed by the U.S. Army in Iraq and Afghanistan since 2001. The Canadian armed forces have also used them in Afghanistan. Raytheon is the prime contractor and is also responsible for the same surveillance package fitted to telescoping towers that can reach as high as 100 feet. 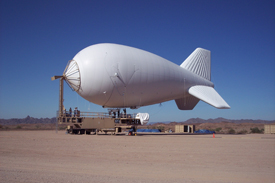 The Persistent Threat Detection System (PTDS) followed the RAID system into service with the U.S. Army in Iraq in 2004. The Akron, Ohio facility of Lockheed Martin Mission Systems and Sensors has delivered the PTDS under an integrated, contractor-operated contract. The company delivered 37 units by the end of 2010 and gained a $184 million contract for 29 more last June. They have a volume of 56,000, 64,000 or 74,000 cu ft.

ILC Dover–which claims to be the world’s largest fabricator of aerostat and airship envelopes–has produced most of them for Lockheed Martin. The payload is 500 pounds, consisting of a Wescam Mx-20 EO/IR camera, an acoustic sensor and a communications relay. The maximum altitude from sea level is 5,000 feet (or 2,500 feet from a 6,000-foot location).

The PTDS is designed to operate continuously for 25 days at a time. Lockheed Martin is also now working on an $85 million contract to add new wide-area sensors.

The PGSS already mentioned was a smaller-scale offshoot from PTDS, when the U.S. Army realized that aerostats could help protect remote forward-operating bases in Afghanistan. In addition to Raven Industries, TCOM has also provided aerostats for this program. The mooring and ground stations are small enough to be lifted by a CH-47 helicopter to the remote bases. The first of at least 30 PGSS aerostats reached Afghanistan in January 2010, and the first four logged more than 22,000 hours in the first year. They have a 14-day endurance.

According to one U.S. Army officer, “there are countless stories of IEDs being placed by insurgents that were detected by the PGSS. In an ideal situation, you can catch someone plant an IED, watch where they go and then uncover an entire organization.”

All of the aerostats described above are camera-carrying platforms that perform ground surveillance. The radar-carrying aerostats that do airspace surveillance are much larger. They were first deployed along the southern border of the U.S. in the 1980s to detect drug-running aircraft. The U.S. Air Force has managed the Tethered Aerostat Radar System (TARS), with ITT Systems Division and Lockheed Martin acting as integrators over the years. TCOM and ILC Dover have both provided aerostats for the TARS, in two sizes. The initial 275,000-cu-ft version (187-feet long) could carry a 1,000-pound payload to 12,000 feet. The radars are carried in a lower chamber below the main envelope, with an onboard generator helping to provide power and pressurization. 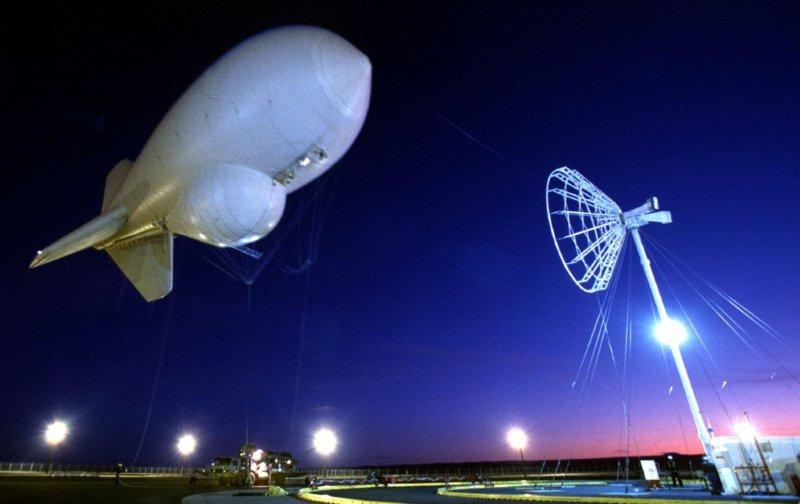 Today, the TARS is deployed at nine sites along the U.S.-Mexico border, the Florida Straits and parts of the Caribbean. It monitors small maritime targets as well as low, slow-flying aircraft.

Radar-carrying aerostats similar to the TARS have been supplied to Middle East countries since the 1980s. TCOM was originally a subsidiary of Westinghouse, which sold TPS-63-equipped versions to Kuwait and Saudi Arabia. The UAE has acquired at least one 420,000-cu-ft aerostat for airspace surveillance. Pakistan is reported to be acquiring six L-88 radar-carrying aerostats. India bought Elta-radar equipped aerostats from Israel to monitor the Pakistan border, one of which was lost in “difficult weather” but the country ordered more as a response to the seaborne terrorist attack on Mumbai.

Last but not least, there is the U.S. JLENS (Joint Land attack Elevated Netted Sensor) program. This is a long-running development that was originally conceived in the 1990s as a defense against cruise missiles. Raytheon is the prime contractor, having received a contract worth $1.3 billion in 2003. 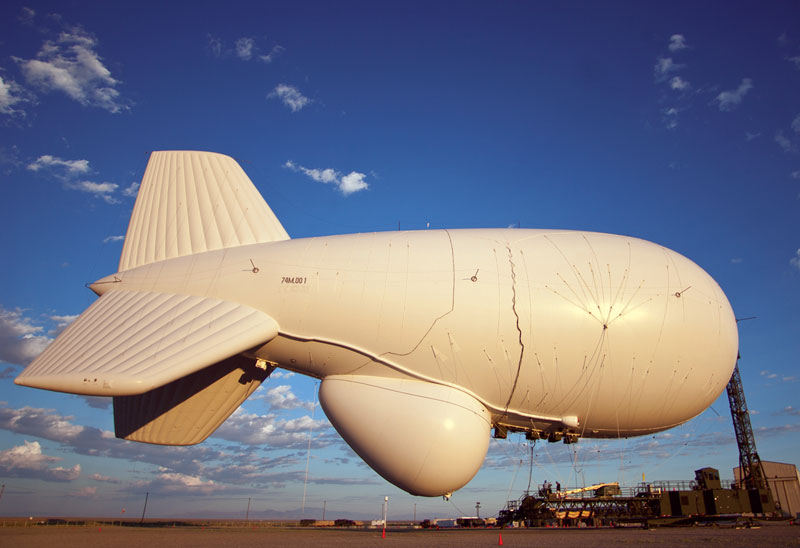 Raytheon JLENS - This 590,000-cu-ft aerostat is the largest yet flown for a military surveillance mission. It was fabricated by TCOM for the Raytheon JLENS development program. Like similar radar-carrying aerostats, the sensor is housed in a separate, pressurized compartment below the main envelope. (Credit: Raytheon)

The concept was for two aerostats to be deployed in tandem, one carrying a surveillance radar, the other a fire control radar. TCOM has provided two of the world’s largest aerostats (590,000 cu ft) for JLENS. The mooring station alone weighs 180,000 pounds.

A first flight was made in August 2009, and Raytheon reported a successful endurance test on the Utah range in July this year (the system is supposed to remain airborne for 30 days at a time). Unfortunately, one of the huge aerostats was destroyed in September 2010 at TCOM’s Elizabeth City, North Carolina facility when one of the company’s airships broke loose in bad weather and crashed into it. The U.S. Army has requested no less than $168 million to replace it.

The following is a video by Raytheon about their JLENS Aerostat program.