Posted on March 10, 2012 by LighterThanAirSociety 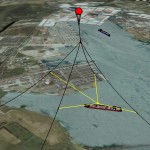 Every U.S. good sold overseas or iPad shipped from China makes one of 500 million journeys aboard ship containers crossing the world’s oceans each year — a journey that ends at deep-water ports capable of docking and offloading the world’s biggest cargo ships. Now a U.S. entrepreneur wants to give every city or town an instant seaport with his vision for robot cranes floating in the sky beneath giant balloons.

Such a system could span the 50-mile (80 kilometers) long Panama Canal that connects the Atlantic and Pacific oceans to help move containers during shipping traffic gridlock, or could enable rapid supply lines for the U.S. Navy and Marines when supporting military operations or humanitarian relief efforts during disasters. Most importantly, it could turn shipping economics upside down for 90 percent of the world’s trade goods by offloading containers from offshore ships without any harbors or seaports. 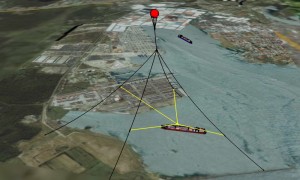 “There are thousands of cities along every coast where there is a major port in the vicinity, and those small cities want to compete with that major port,” said Jeremy Wiley, founder of Tethered Air. “It would absolutely disrupt the opportunity for ports to be established.”

The robot crane consists of a cargo-lifting body suspended from four payload cables that in turn connect to four vertical anchor cables. Those anchor cables join together with a huge balloon at the pinnacle to form a pyramid shape — a design that allows the robot crane to move anywhere within that space by shortening and extending its own suspension cables or sliding up and down the anchor cables. 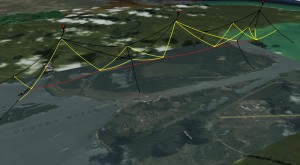 From the Vietnam War to the NFL

Wiley first began thinking about the idea as a U.S. Marine helping offload ships in Kuwait during the U.S. military buildup for the Iraq War. He found past examples of Canadian loggers trying basic balloon and cable systems to move fallen trees down mountainsides to nearby roads, as well as a 1976 experiment by the U.S. military to do ship-to-shore cargo transfer during the Vietnam War.

Such early experiments faltered because it took too long for winched cables to drag the balloons back and forth — the Canadian loggers turned to helicopters and the U.S. military simply gave up despite port backlogs for its supply ships being over six months long.

But the rise of robotics has allowed Wiley to envision the robot crane moving around on payload cables separate from the stationary balloon and its anchor cable system. That system mimics how the NFL’s Skycam moves above the action on a football field, except that the Tethered Air cables would eventually connect to a giant balloon rather than the four corners of the stadium.

“The cable robotics you see in an NFL game would be the same robotics keeping the balloon stationary,” Wiley told Innovation News Daily. “That’s the real key here. The balloon can be stationary and not have to deal with aerodynamic effects.” 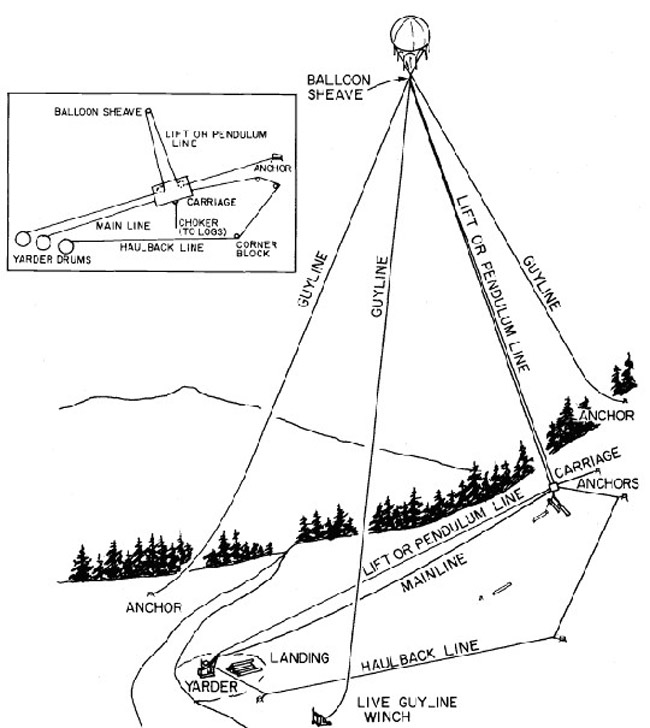 The Tethered Air idea of using semi-autonomous robotic control represents an “evolutionary” step in harnessing the power of balloons, said Leon Eversfield, a lighter-than-air expert in the U.K. He assisted Swedish aeronaut Per Lindstrand and British billionaire Richard Branson on their record-breaking hot air balloon voyages across the Atlantic Ocean.

“There’s a lot of technology built in the balloon fabric price per square foot, but it’s relatively low-cost in the overall scheme of things,” Eversfield explained.

Balloons have also proven their power in more recent times. In 2002, Eversfield helped a company called CargoLifter show how a 200-foot-wide balloon could lift a 55-ton military tank in the air. Canadian astronomers also demonstrated the stability of a balloon and cable system — they used it to hold a telescope’s receiver in the air above a ground reflector with an alignment accuracy of two centimeters even during wind gusts.

Wiley’s idea has stirred interest among robotics researchers at Harvard University and NASA’s Jet Propulsion Laboratory, and he believes he can create the system based on off-the-shelf commercial technologies. But he has yet to find serious funding despite trying a crowd-funded Kickstarter project online. 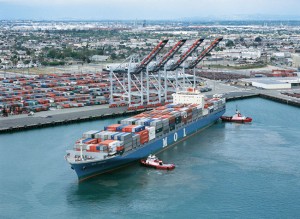 Robot balloon cranes might slash costs for major shipping ports -- or make give them new competition. CREDIT: Port of L.A.

Still, Wiley remains optimistic about his approach. It’s possible that balloons are in his blood — he claims to be a descendant of Captain Herbert Wiley, a U.S. Navy aviator who served aboard the Navy’s USS Macon and USS Akron blimps. Captain Wiley also became the only officer to survive the crash of the USS Akron on April 4, 1933.

A scale-size Tethered Air demonstration might cost $30,000 to show how it could move a 10 to 50 pound payload around an area of about a square mile. But even a full setup would only require $7 million to $10 million for moving full-size containers from ship to shore (or vice versa), according to Wiley’s estimates. He hopes to someday offer his services for “zero capital cost” to developing countries, and even share some of the revenue he gets with local governments.

“That zero-capital opportunity means they’re getting money immediately from the first container I move,” Wiley said. “I think it would explode in the developing world if they saw how it was profiting a local community to create a port environment.”

The U.S. military might have also found such instant offloading operations useful when it sent ships and troops to assist Haiti in the aftermath of the 2010 earthquake that killed tens of thousands of people. The U.S. Navy and Marine Corps spent $20 million just to deploy a temporary pier over a period of about a month, so that it could begin offloading needed supplies.

“I think it could be set up in a matter of hours,” Wiley said. “This entire equipment could be airlifted to the disaster site, set up in a couple of hours, and provide full-relief disaster from sea.”

To see more on how this concept works, visit http://cargolifter-operations.com/