Posted on July 30, 2012 by LighterThanAirSociety 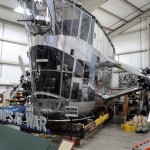 WINDSOR LOCKS, Conn. — The restoration of the only surviving example of a World War II Goodyear blimp control car is nearing completion, some 20 years after it started, at the New England Air Museum here.The extensive restoration of the blimp control car, one of about 80 aircraft on display at the museum, is an example of the painstaking work carried out by dozens of volunteers who restore aircraft of historical significance.

Unrecognizable or not, the Goodyear blimp played a critical role in the war. Prior to its introduction, there were many German submarines off the United States coast, sinking one American ship after another. Many of those ships were transporting supplies to Britain. 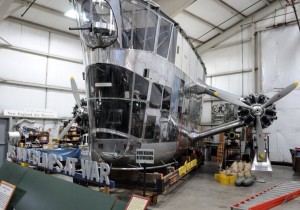 “The blimps, built by Goodyear and owned and controlled by the U.S. Navy, could spend several days out in the air,” Speciale said. “They were great at sighting submarines. After that, we didn’t lose any more ships. So the blimp car we’re restoring is the most magnificent restoration I’ve ever seen.”

The New England Air Museum contains aircraft from all eras, both civilian and military, including helicopters. Many of the military aircraft are on permanent loan from the government, meaning as long as the museum stays open to the public, they can keep the items. Many civilian aircraft are donated by individuals.

Led by a part-time coordinator, virtually all the restoration work is done by highly-skilled volunteers such as retired engineers and machinists, who know how to weld, rivet and paint.

“Some we have to repair, and quite a few we have to fabricate parts for, and that’s the real challenge,” Speciale explained. “The manuals are readily available, so we make replacement parts out of the same materials the original stuff would have been made out of.”

Some restorations take under a year to complete, while others can take several years.

Russell Magnuson, a retired machine designer and mechanical engineer at New Britain Machine, has been volunteering at the museum since 1990. He said he wasn’t working as a tour guide for long before he was tapped to head the volunteers as crew chief, working on the blimp control car restoration, in 1993.

“I think I was out that day, and they picked me (as crew chief),” Magnuson joked. “I’m 83; I’ve gone through maybe four or five crews (since the work started) as some of the volunteers have passed away.” 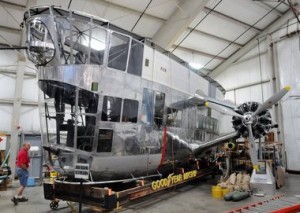 As knowledgeable as he is about World War II history, Magnuson is nothing short of an expert on the Goodyear blimp control car he has restored with complete dedication.

The museum’s control car is number 28, out of 134 total manufactured. It is one of only five that Goodyear bought back from the Navy for $3,000. The rest of the blimps were scrapped.

“They stripped everything out of the control car except for the pilot seats,” Magnuson said. “They used it for less than a year, and then they put it in storage.”

The car remained in storage in Ohio until 1989. Goodyear wanted to get rid of it and contacted the museum. It was shipped to the museum in 1989 and started deteriorating until work began in earnest to bring it back to its heyday, in 1993.

When the museum takes on a restoration project, Speciale says, it’s a major undertaking.

“We don’t just restore items to make them look good,” he said. “They should be accurate. We actually restore them on the inside as well.”

So, along with his helpers, (Magnuson’s current crew members come from Marlborough, Mass., Marlborough, Conn., and he is from Southington, Conn.) Magnuson has spent every Tuesday and Thursday restoring the control car with as much accuracy as possible.

The crew began with removing about six coats of peeling exterior paint. The car’s 42 exterior windows, made of Plexiglass, were all replaced.

Magnuson then took on the interior floor. The floor was made of balsa wood, and it was badly deteriorated.

“They used it because it was light; they wanted to save all the weight they could,” he said. “I took the floor apart, and it was just like pulp. I was afraid we were going to fall through the floor.”

The wood was replaced with exterior three-quarter-inch plywood. While not true to the original, Magnuson said, it was the best option for the 6-by-42-foot floor, which may have visitors walking over it some day.

After finishing the straightforward restoration work, Magnuson and his crew started looking into the more detailed parts of the project.

“I contacted Goodyear to see if I could get any engineering material or blueprints so we could rebuild everything that was missing, but they said they got rid of it after the war,” Magnuson said. “So we had no documentation whatsoever.”

What the crew was able to access was maintenance materials for the aircraft, including some sketches and detailed photographs.

“Being an engineer, I re-engineered every item in that blimp,” he said. “I made detailed drawings at home of all the parts, and my crew would fabricate the parts in the machine shop at the museum.” 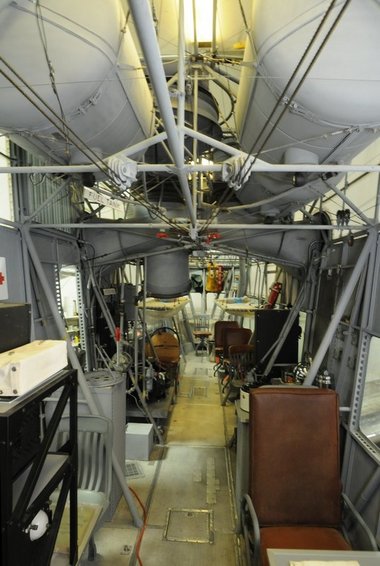 A view inside of the Goodyear Airship Control Car at the New England Air Museum.
Photo: Mark M. Murray, The Republican

The volunteers recreated the entire galley in the control car, complete with coffee percolators.

There’s also a navigator’s table, where the navigator sat and plotted the courses.

“We rebuilt the radio operator’s table with all of the equipment, which we found on eBay,” Magnuson said. “One of the volunteers is a ham radio operator, and he knew people from all over the world who collect antique radios. Through his efforts, we got most of the original type of radio equipment.”

There’s also an aluminum sink, a faucet and a water tank where the crew would have washed their hands. There’s also a toilet, all “made from scratch,” Magnuson said.

The crew recreated signal flares and replica cartridges, which the crew would have used to signal a merchant ship, as well as a machine gun turret, which took Magnuson a year to build.

One unique aspect of the control car is the replica pigeon cage. Each of the blimps had a small cage containing six pigeons. The birds were tagged with messages and released, and would fly back to the base with the messages.

As the project nears completion two decades after it started, Magnuson said he’s proud to have worked on such an important piece of history.

“They did a very important job, and we lost so many crews (before they were used),” he said.

The restoration work on the control car has been done while it is on display, so visitors can catch a glimpse of the progress being made.

Other aircraft currently undergoing restoration work at the air museum include a S-59, the first jet-powered Sikorsky helicopter, dating to the 1950s and a Douglas A-26 Invader World War II bomber, which was involved in the D-Day invasion.

Click here to see a collection of pictures about the project included in the article.