Posted on September 7, 2012 by LighterThanAirSociety 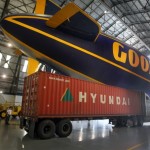 SUFFIELD TWP.: A truck carrying the first container of German-made parts for a newer, larger and faster Goodyear airship backed slowly past the Spirit of Goodyear blimp inside the Wingfoot Lake hangar base Thursday afternoon. 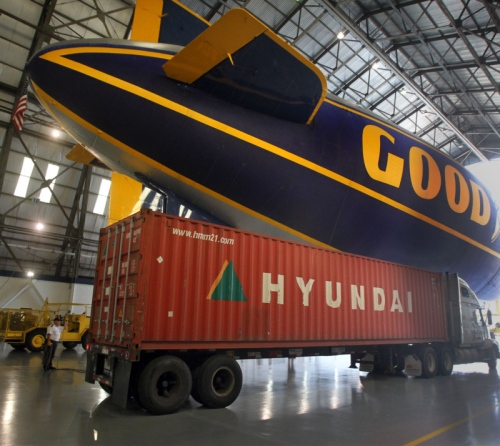 Starting in January, those parts — with lots more to come — will be assembled into a state-of-the-art airship. By early 2014, the Spirit of Goodyear and its late 1960s-era design will be retired and taken apart.

The $63 million overhaul of the iconic Goodyear blimp fleet, first announced in May 2011, is under way.

“It’s a new beginning,” said Ed Ogden, who heads public relations for the Spirit of Goodyear.

Almost the entire Wingfoot hangar base turned out to watch the tractor-trailer work its way slowly through the open hangar, then through large doors to a work area for unloading. 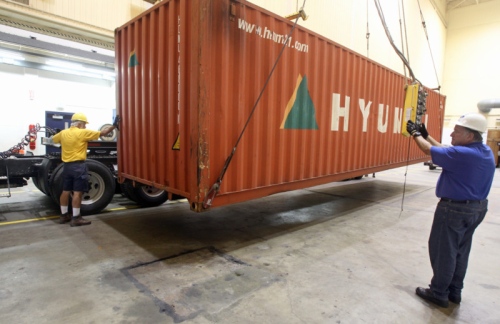 The large container on the back of the trailer held large wooden crates with 21 longerons, which are aluminum and carbon-fiber structures. Those pieces will provide an internal frame for the 246-foot-long airship, a joint venture between Goodyear Tire & Rubber Co. and ZLT Zeppelin Luftschifftechnik. The longerons arrived by ship in New York Harbor and were trucked to the Suffield Township hangar. The crates will be unpacked today.

The internal frame is one of the significant features that will separate the new aircraft from Goodyear’s U.S. fleet of three blimps, which have no frames. All three blimps will be replaced with the new Zeppelin airships in upcoming years. Each of the modern Zeppelin craft will cost about $21 million, Goodyear has said.

The semi-rigid aircraft will still be called “Goodyear blimps,” Ogden said. “We don’t want to change that.”

Ogden acknowledged that purists will point out that blimps do not have internal frames. They basically are large, helium-filled bags with gondolas, or cabins, fastened underneath for the pilot and passengers. 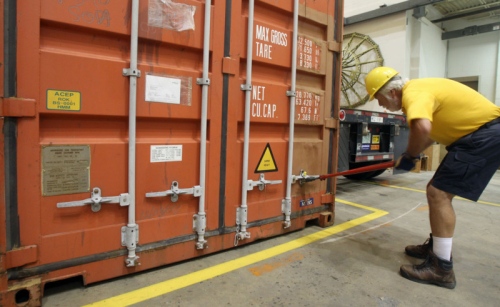 Besides being significantly longer and wider than the current 192-foot-long blimps, another big difference is how the new airships will move. The new Goodyear blimps will have three prop-engines instead of two, with two engines mounted on the side of the airship and one at the rear.

The design also provides more room in the cabin. The new airships will have room for 13 people; the current blimps hold seven, including the pilot.

Work has been going on behind the scenes for more than a year to get ready for the new blimps, Ogden said. The Wingfoot Lake hangar has been upgraded to accommodate the Zeppelin building process, which is different from how the old blimps were made, he said. There also are separate storage areas for new blimp parts and for current GZ-20A blimp parts to make sure nothing gets mixed up.

Already, Goodyear blimp pilots and Wingfoot base technicians have traveled to Germany for training. Zeppelin engineers from Germany will be coming to the Ohio facility to oversee the building of the new blimps, with most of the hands-on work to be done by Goodyear employees, Ogden said.

Goodyear and Zeppelin first worked to build blimps together in the early part of the 20th century. The “GZ” designation Goodyear uses for its blimps stands for “Goodyear Zeppelin.” 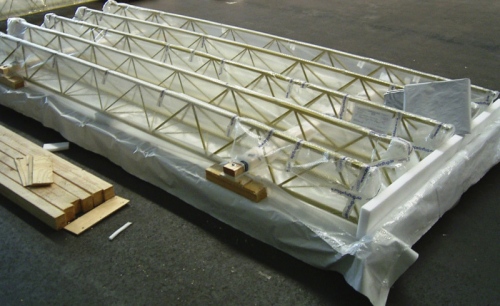 These are German-made longerons, part of the internal frame of a semi-rigid Zeppelin airship, getting ready to be shipped from Germany to Goodyear’s Wingfoot Lake hangar base.
Photo: Goodyear Tire & Rubber Co.

“This is an exciting time for us at Goodyear Airship Operations,” Nancy Ray, director for Goodyear Global Airship Operations, said in a statement. “This brings us full circle while moving us into the future with enhanced technologies and engineering improvements.”

The first new airship will be based in Florida. The Spirit of Innovation, Goodyear’s newest old-style blimp, built in 2006, will move to Wingfoot Lake and be replaced in 2017. The Spirit of America, based in Carson City, Calif., will be retired in 2015.