Posted on September 6, 2012 by LighterThanAirSociety 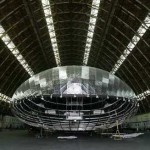 Southland aerospace firms are building the next generation of blimps and other airships.

Not since the waning days of World War II have the mammoth wooden blimp hangars at the former military base in Tustin seen as much airship manufacturing work as they do today. 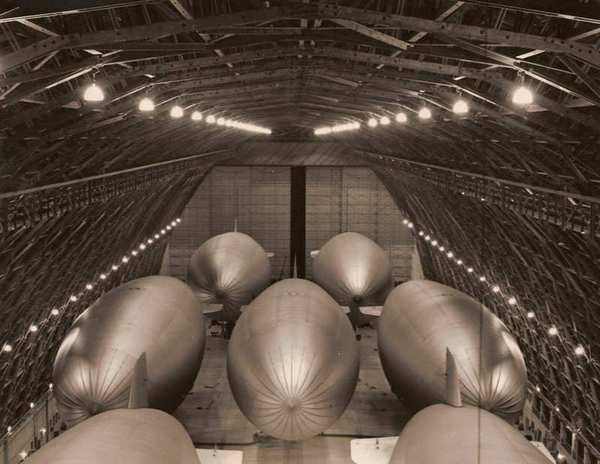 U.S. Navy K-class blimps are stored in a Tustin hangar circa 1942.
Credit: City of Tustin

Inside the 17-story structures that rise above southern Orange County, Worldwide Aeros Corp. is building a blimp-like airship designed for the military to carry tons of cargo to remote areas around the world. 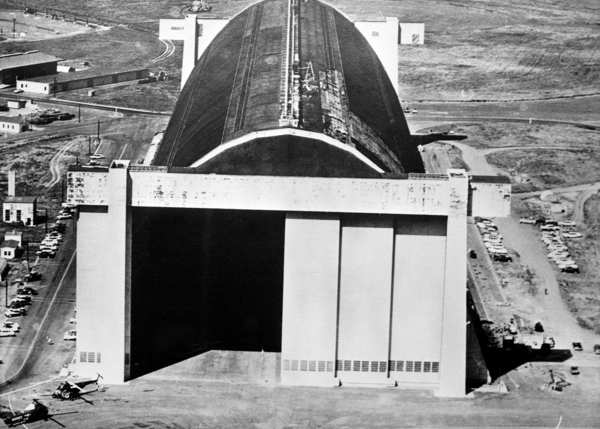 “Nobody has ever tried to do what we’re doing here,” Chief Executive Igor Pasternak said of the 265-foot skeleton being transformed into the cargo airship. “This will revolutionize airship technology.”

Residents of Southern California are no strangers to airships. The Goodyear blimp, based next to the 405 Freeway in Carson, regularly lumbers its way across Southland skies and settles above the Rose Bowl and other locations for televised views from overhead. Goodyear imitators also dot the skies above other venues.

But in recent years, the affordability of airships as well as developments in high-definition cameras, high-powered sensors and other unmanned technologies have turned these oddball aircraft from curiosities of a bygone era to must-have items for today’s military. And airships increasingly are being used for civilian purposes. 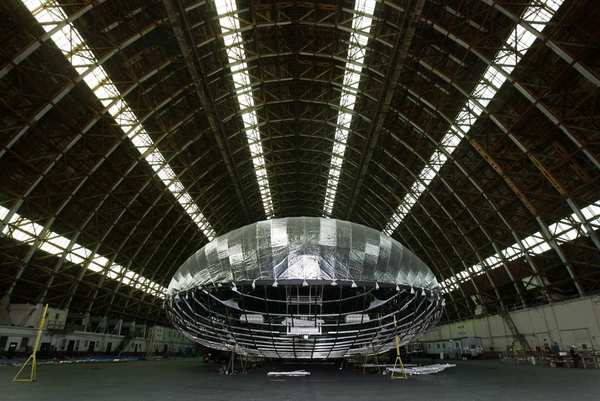 The front end of a new blimp-like airship is being constructed by Worldwide Aeros in a World War II-era blimp hanger at a former military base in Tustin. The airship will be used by the military to carry tons of cargo to remote areas around the world.
.Photo: Don Bartletti / Los Angeles Times

The federal government is buying blimps, zeppelins and spy balloons, and many of these new-generation hybrid “lighter than air” aircraft are taking shape across California.

“So much is going on with airships in California now,” Pasternak said. “It wasn’t this way 10 years ago.” 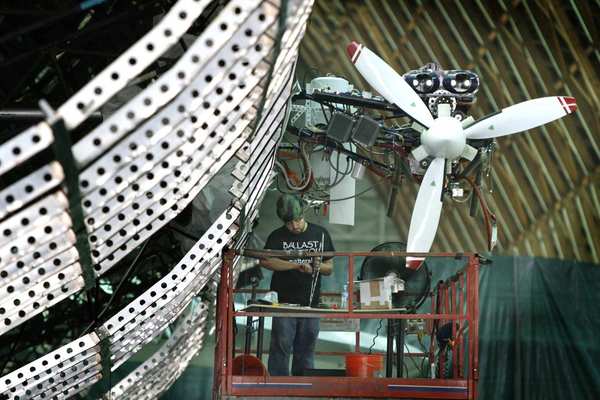 Engine mechanic Gerardo Esparza works on one of the three engines that will propel the new airship.
Photo: Don Bartletti / Los Angeles Times

Pasternak’s Montebello firm makes airships used for surveillance, advertising and transport. Lockheed Martin Corp. designs and builds airships for commercial use at its secretive Skunk Works facility in Palmdale. Northrop Grumman Corp. does design work for airships around the Southland but is building them in Florida.

Although these steerable aircraft are sometimes known casually as blimps, there are differences. A blimp is shaped by the gas inside of it, whereas a zeppelin has a rigid skeleton inside. The helium-filled sky balloons, or aerostats, used over Afghanistan are neither blimps nor zeppelins. But they all fall under the term “airship.” 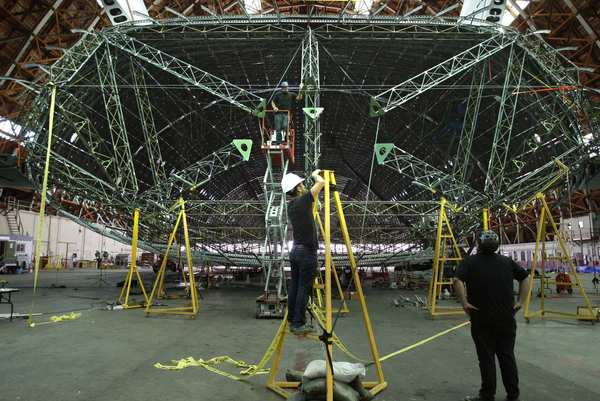 The importance of these next-generation airships became obvious to the Pentagon as increased use of drones highlighted the need for stationary aircraft that could provide constant surveillance, not just overhead flights for a few hours. That’s where these unmanned blimps came into play, with their ability to linger over an area for days at a time.

Using balloons, blimps and zeppelins in a war zone is not a new idea. The military used balloons for aerial observation posts during the Civil War, and the Germans used zeppelins to drop bombs on England during World War I. Locally, massive blimps regularly patrolled the Pacific Ocean coastline looking for Japanese submarines and other warships during World War II. 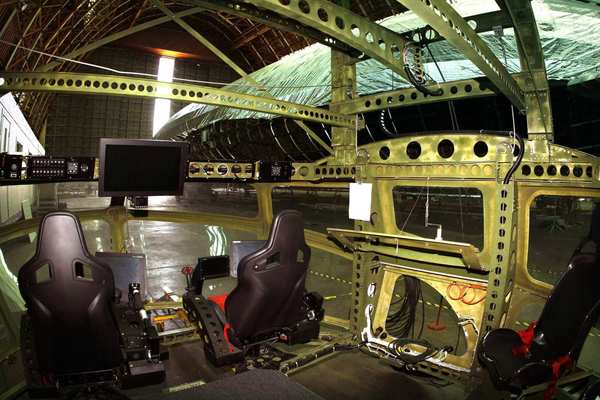 The cockpit sits on the floor next to the partially assembled airship. It will be be installed beneath the craft.
Photo: Don Bartletti / Los Angeles Times

After that, the military began opting for helicopters and sub-hunting aircraft, and the demand for blimps, balloons and other airships began to taper off. But they have played an expanded role in recent years in Mideast conflicts. Currently, there are more than 100 aerostats being used in Afghanistan, up from fewer than 10 in 2004.

Resembling small blimps, these aerostats are tethered to the ground and float thousands of feet above military bases and important roadways. They are big enough that gunfire below won’t take them down. Cameras on aerostats are similar to those on drones and can see for many miles at a fraction of the per-flight-hour cost of a drone. They’re also used to monitor the U.S.-Mexico border.

“It’s an affordable solution,” said Terry L. Mitchell, intelligence futures director at Army headquarters. “You can provide overwatch of the base or troops as they make their way on the ground.”

But these less-sophisticated aerostats don’t have nearly the size or the capability of the next-generation airships that are being designed and manufactured in California and across the nation. 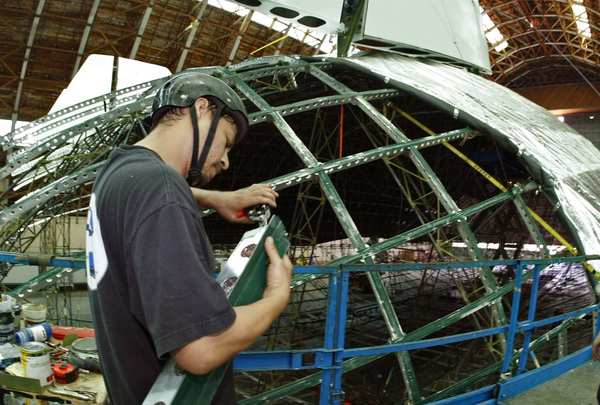 Fredy Zuñiga trims a piece of the airship’s aft section framework. “Because of the curves, every single piece has to be custom cut and fitted,” Zuñiga says.
Photo: Don Bartletti / Los Angeles Times

Pasternak’s Aeroscraft being built in Tustin is a zeppelin with a rigid skeleton made of aluminum and carbon fiber. A new type of hybrid aircraft that combines airplane and airship technologies, the Aeroscraft doesn’t need a long runway to take off or land because it has piston engines that allow it to move vertically and a new high-tech buoyancy control system. 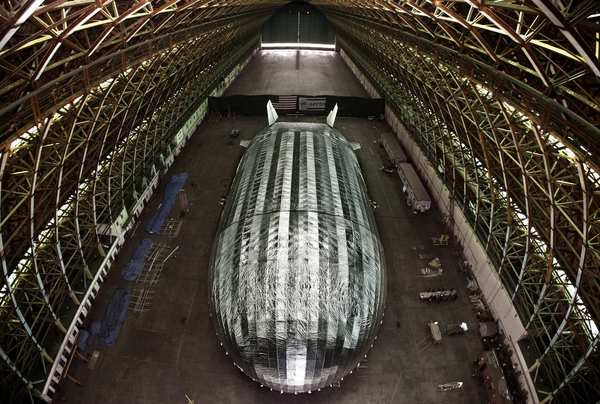 Worldwide Aeros’ Aeroscraft being built in Tustin is a zeppelin with a rigid skeleton made of aluminum and carbon fiber. A new type of “hybrid” aircraft that combines airplane and airship technologies, it doesn’t need a long runway to take off or land because it has piston engines that allow it to move vertically and a new high-tech buoyancy control system.
Photo: Don Bartletti / Los Angeles Times

Pasternak runs a hand through his mop of salt-and-pepper hair and points to the spiny monstrosity, boasting of its versatility.

“This will land in Africa, Afghanistan,” he says, “a Wal-Mart parking lot — wherever.”

Pasternak hopes to have a first flight by early next year and to demonstrate cargo-carrying capability shortly thereafter. 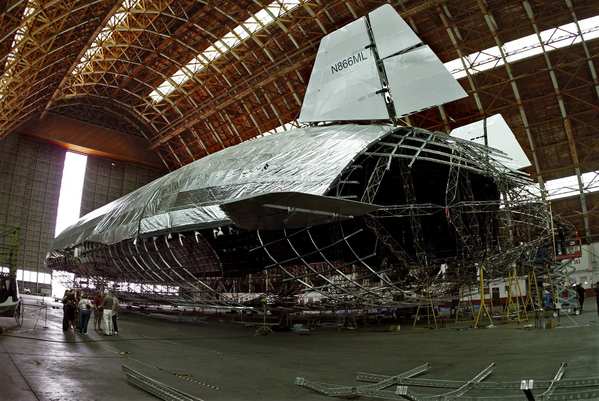 The Aeroscraft is being built under a contract of around $35 million from the Pentagon and NASA. That’s a tall order for Worldwide Aeros, a company of about 100 employees.
Photo: Don Bartletti / Los Angeles Times

The Aeroscraft is being built under a contract of around $35 million from the Pentagon and NASA. That’s a tall order for Worldwide Aeros, a company of about 100 employees.

But even aerospace giants like Northrop Grumman are seeing the prospects for more airship business. Last month, the company’s Long Endurance Multi-Intelligence Vehicle made its first flight. The 302-foot unmanned LEMV could be floating over the battlefield by next year, providing video and data to troops for more than 21 days at a time. 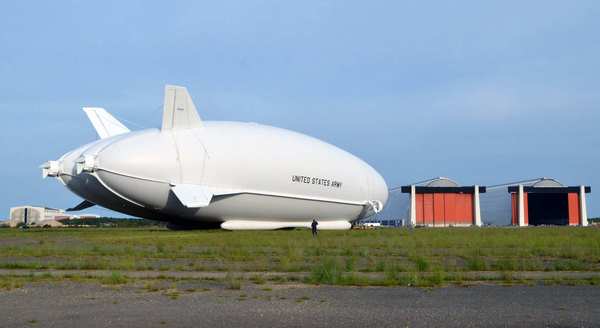 Although the airship’s first flight had a pilot on board, Northrop’s engineers in El Segundo and Rancho Bernardo, Calif., are working out computer programs to reconfigure the lumbering spy ship as a drone.

“Persistent surveillance: That’s the mantra,” says Alan Metzger, Northrop’s program manager for the $517-million contract. “You can launch one of these for days — even weeks — at a time, and have no gaps in coverage.” 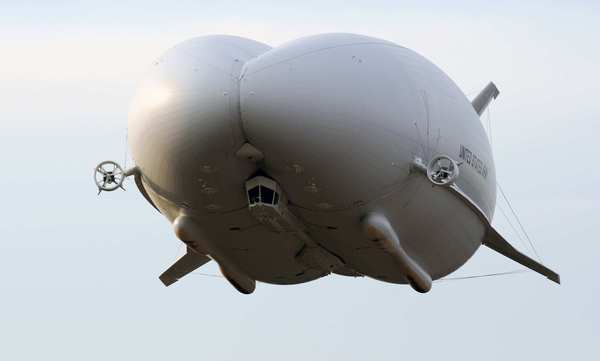 Northop Grumman’s Long Endurance Multi-Intelligence Vehicle rises above historic Joint Base McGuire-Dix-Lakehurst, N.J., on Aug. 7. The 302-foot unmanned LEMV could be floating over a battlefield by next year, providing video and data to troops for more than 21 days at a time.
Photo: Northrop Grumman / August 31, 2012

Some of the military’s airship programs haven’t had success. The Air Force moved to cancel work on a $211-million program, dubbed “Blue Devil,” after the Vicksburg, Miss.-based contractor Mav6 ran into development problems.

Another Air Force airship, filled with 420,000 cubic feet of helium and air and costing $8.2 million, floated away and exploded last year when a tropical storm blew in during a test flight in Puerto Rico. Army aerostats have also been lost in high winds.

Public perception of airships has been guarded ever since the giant Hindenburg burst into flames in 1937 in front of news cameras while mooring at Lakehurst, N.J. The explosion of the hydrogen-filled German zeppelin killed 36 people, shocked the public and deflated the chances of lighter-than-air ships becoming a popular mode of travel.

These days, airships are filled with nonflammable helium, but the Hindenburg tragedy remains vivid to many even today.

“It’s very easy to dismiss airship technology. There is a record of public failure, and it’s sometimes difficult to take seriously in the modern era,” said Bill Althoff, author of “Sky Ships: A History of the Airship in the United States Navy.”

Still, the new materials and technology used in today’s airships have greatly increased the vehicles’ capabilities, Althoff said. “The virtue of the platform has endured,” he said.

There is belief among those in the airship business that the technology can take on more civilian roles. Airships already have provided surveillance over the Mexican border for security and on disaster-control missions such as the 2010 BP oil spill on the Gulf Coast. 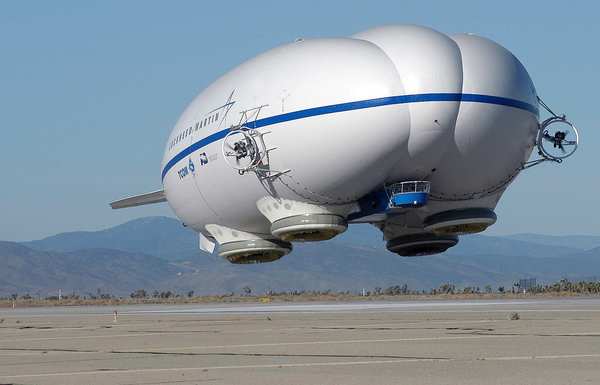 At Lockheed’s facility in Palmdale, work is underway on a 290-foot airship, called SkyTug, to be sold to the commercial market by Canada’s Aviation Capital Enterprises. The first SkyTug will be similar to a “super-sized helicopter” capable of carrying 20 tons of cargo.

Bob Boyd, Lockheed’s program manager for hybrid airships, said the company expects to start the Federal Aviation Administration certification process by the end of the year. A number of companies that need to get cargo to remote areas, such as oil and timber firms, are interested, he said.

It takes convincing that the airship is the answer to their problems.

“It’s hard for people to wrap their heads around,” Boyd said. “There are three ways to move cargo: by ship, by truck or by train. Suddenly there’s this fourth option.” 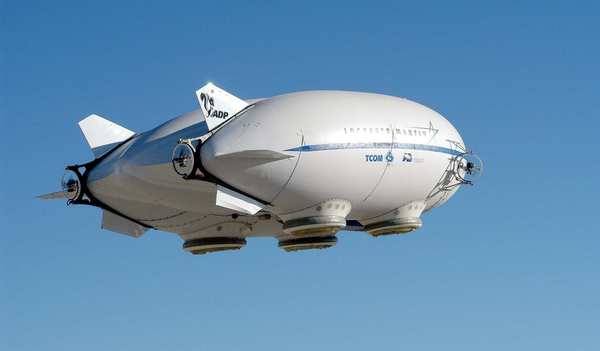 Lockheed Martin’s P-791 Airship is shown in its first flight in Palmdale in January 2006. The airship was a precursor to Lockheed’s new a 290-foot airship, called SkyTug, that will be sold to the commercial market. The first SkyTug will be similar to a “super-sized helicopter” capable of carrying 20 tons of cargo.
Photo: Bob Driver / Lockheed Martin

Within three years, Boyd said, his company could be manufacturing as many as 30 airships a year.

“People don’t recognize it, but Southern California is the epicenter for hybrid airships,” he said. “We’ll certainly be filling the sky with something unusual in the coming years.”