Navy airship to be mothballed but could fly again

Posted on February 23, 2012 by LighterThanAirSociety 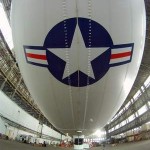 Just four months after its formal acceptance by the Navy, the MZ-3A airship at Joint Base McGuire-Dix-Lakehurst is now to be deflated and stored, and the program suspended amid the overall search to save money in the Department of Defense.

“It is being deflated. It’s not that we have a lack of funding. We have a lack of mission,” said Doug Abbotts, a spokesman at the Naval Air Systems Command center at Patuxent River, Md.

“We’ve heard rumors. … This is very disappointing to us,” said Carl Jablonski, president of the Navy Lakehurst Historical Society. The group includes Navy veterans who served during the era of Cold War blimp patrols, and they helped train the MZ-3A contract crew. 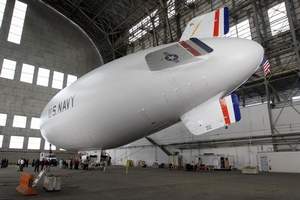 The Navy’s MZ-3 blimp, seen at its pubic unveiling in October inside Hangar One at Joint Base McGuire-Dix-Lakehurst, is a military research vehicle. It is 180 feet long and can cruise at 10,000 feet. / NJ PRESS MEDIA 2011

The airship “has proved its worth,” Jablonski said. “It’s a shock to us. It’s been good for our country, it’s good for homeland security, good for our area and it brings in jobs.”

The airship was in North Carolina on Tuesday and expected back at Hangar 1 on the base’s Lakehurst side this weekend, Jablonski said.

Called a flying laboratory by Navy officials, the airship is used by the Naval Research Laboratory to test intelligence and surveillance sensors, at considerably less cost than aboard fixed-wing or rotor aircraft, program managers say. The blimp also served during the 2010 Deepwater Horizon oil spill crisis by helping to monitor the Gulf of Mexico oil spill.

A modified civilian A-170 airship built by American Blimp Corp., the MZ-3A has been in development since 2006 at a cost of around $3.6 million. But in the escalating federal budget crunch, there is not enough work to keep the program active. “When the next mission comes up, it will be reinflated,” Abbotts said.

That will likely mean layoffs for the civilian contract crew. Airships like the MZ-3A must be tended while inflated, so removing the lighter-than-air helium and packing the envelope and gondola eliminates those maintenance costs. 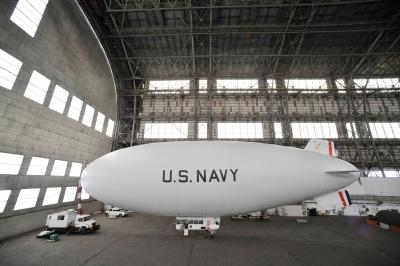 The program needs a new customer to continue, Abbotts said. The last project – testing equipment for the Army – ran for 120 hours in the air, Abbotts said.

“We’re hoping to have a customer by March 9,” he said. Failing that, workers will deflate the blimp and crate components for storage.

Jablonski said, “We had been hoping for some kind of standby status, where they would keep the ship inflated” with a minimal standby ground crew to save money. “They have a very good ground crew that travels with this airship, and they’re not going to wait around.”

While the Navy is pulling back from its airship program, the Army is continuing with its $517 million Long-Endurance Multi-Intelligence Vehicle (LEMV) program across the field from Hangar 1. The project, led by Northrop Grumman, aims to field battlefield surveillance airships more than 300 feet long — the biggest military airships since the Navy’s Cold War blimps flew from Lakehurst.

The LEMV craft is capable of staying aloft for three weeks at altitudes up to 22,000 feet, feeding information into the Army’s battlefield command and control networks. The prototype was inflated last September in Hangar 6 on the base but has yet to fly.

During its test phases, the MZ-3A cruised the skies as a mysterious, unmarked white blimp, but in a formal acceptance ceremony last October it was decked out in a red, white and blue color scheme — reminiscent of 1920s military aircraft — to mark the centennial year of Navy aviation. It marked a brief return of lighter-than-air flight to the service. The Navy’s last squadron of active-duty airships used for anti-submarine and long-range radar work had been decommissioned at Lakehurst almost exactly 50 years before.