Posted on January 9, 2012 by LighterThanAirSociety 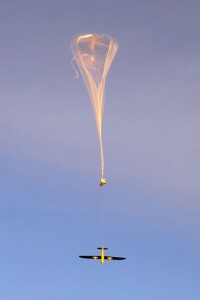 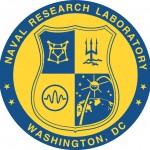 The ADD concept is to enable small unmanned air vehicles (UAV) equipped with sensor payloads to be launched from aircraft (manned or unmanned), balloons, or precision guided munitions, and dispersed in selectable patterns around designated areas.

“The mission profile is straight forward,” says Chris Bovais, aeronautical engineer and flight test coordinator, NRL Vehicle Research Section. “The CICADA is dropped from another airborne platform, flies to a single waypoint, and then enters an orbit. It descends in that orbit until it reaches the ground.” 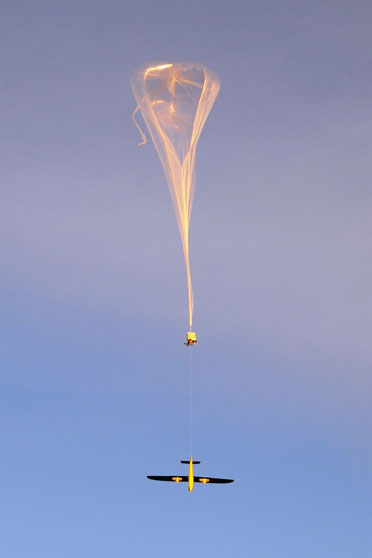 Carried to altitude by balloon, the Tempest UAV with two wing mounted CICADA vehicles is released for flight to a 'drop' destination.

The NRL developed CICADA Mark III UAV is a glider; it has no propulsion source onboard, therefore. It requires another airborne platform to get it to an altitude such that it can glide to its destination. Its lack of a motor and small size, make it nearly undetectable in flight.

The ADD field trials successfully demonstrate that the CICADA can perform a precision delivery of a notional payload after being dropped from a ‘mother-ship’ or being carried aloft by a balloon. Standoff distances of 30 nautical miles and altitudes up to 57,000 feet were demonstrated, with an average landing error of 15 feet from the commanded location. 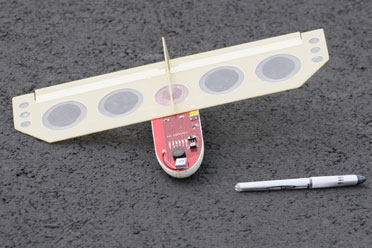 During the demonstration, the UAV ensemble was lifted to altitude using balloons operated by Aerostar International. A UASUSA built Tempest UAV, with two CICADA vehicles attached on wing-mounted pylons, was carried aloft to altitudes approaching 60,000 feet. The Tempest mother ship was released from the balloon, autonomously executed a pull-up maneuver, and then carried the two CICADAs to a drop location. Each CICADA vehicle was then released from the mother ship and autonomously flew to the preprogrammed target waypoint. 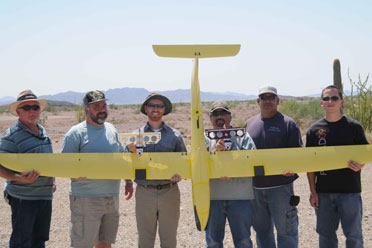 “Many remote sensors are currently hand emplaced,” said Bovais. “The CICADA allows for the low-cost delivery of multiple precision-located sensors without placing the warfighter in harm’s way.”

The CICADA Mark III is a unique vehicle. The airframe is simply a printed circuit board also serving as the autopilot, the first known multi-purpose airframe/avionics implementation of its kind. This novel construction method significantly reduces assembly time, minimizes wiring requirements, and enables the manufacture of low-cost and rugged micro air vehicles. The airframe shape is easily scaled to accommodate various payload sizes and potential acoustic, magnetic, chemical/biological and SIGINT sensors. Unique to this construction technique, additional electronic payloads can be inserted into the system by updating the printed circuit board artwork and ‘re-winging’ the aircraft. 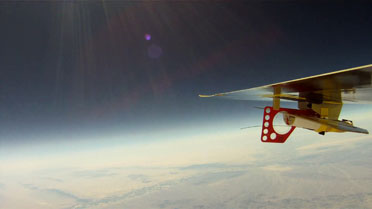 A CICADA Mark III is carried beneath the left wing of the Tempest UAV at 53,000 feet, after release from the balloon and before releasing the CICADA.

A custom autopilot for the CICADA, both hardware and software, was developed by the Vehicle Research Section to be both inexpensive and robust. The only flight sensors are a 5Hz GPS receiver and a two-axis gyroscope. Although having minimal sensors, the navigation solution and the flight controller proved to be quite robust during in-flight testing, routinely recovering from tumbling launches. The flight controller also included a custom NRL algorithm that accurately estimated wind speed and magnitude, despite having no air data sensors onboard. 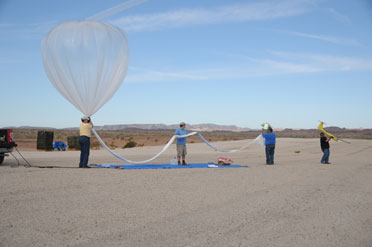 The ADD test crew prepares to launch a weather balloon to carry the Tempest UAV and CICADA gliders to an altitude nearly 60,000 feet above the desert floor. 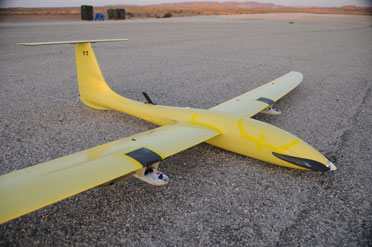 The Tempest UAV airframe, designed and built by UASUSA, Boulder, Col., has a wingspan of nearly 10 feet and is constructed using fiberglass and carbon fiber composites. Shown here, the Tempest holds a CICADA Mark III glider beneath each wing. 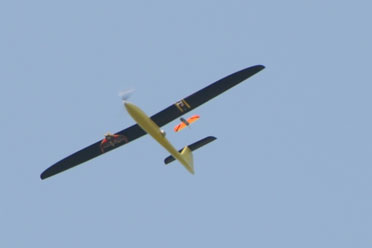