Posted on June 29, 2013 by LighterThanAirSociety 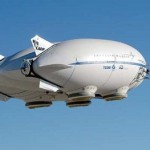 Lockheed Martin has been at work on a giant high-lift hybrid airship since at least 2005, and the company now is moving toward certification and first delivery as soon as next year. The FAA this week published a notice about the company’s application to certify the LMZ1M airship, and noted that because it’s a hybrid and incorporates a number of advanced features, traditional airship design criteria have proved inadequate. A new category for “hybrid transport category airships” will be created specifically for the airship. Advanced features of the vehicle include a tri-lobed envelope with displacement of 1.3 million cubic feet, four thrusters to allow thrust vectoring, and electronic fly-by-wire controls for both the aerodynamic control surfaces and the thrusters.

Other features include an air-cushion landing system that enables the aircraft to operate without a ground crew. The airship can land and take off using any flat surface, including water, with no advance preparations required. The gondola carries two crew members and up to eight passengers, plus a large cargo bay. The ship also can carry external loads. The LMZ1M will be deployed for tactical airlift, humanitarian assistance and disaster relief, as well as “special missions not currently possible with conventional aircraft,” according to Lockheed. The airship can carry up to 500 tons of payload and travel up to 6,000 nautical miles nonstop. Lockheed says the ship can also be operated remotely and stay aloft as long as three weeks at altitudes up to 20,000 feet. Lockheed’s proposed certification criteria have been posted in the FAA docket for comment.

This entry was posted in Uncategorized and tagged certification, hybrid airship, Lockheed Martin. Bookmark the permalink.