Posted on September 18, 2012 by LighterThanAirSociety 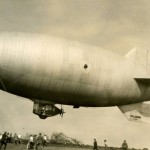 Somewhere in the darkness, high above the glow of the city, a distant voice rang out from the clouds.

“Good evening, ladies and gentlemen of the radio audience,” it crackled. “This is Graham McNamee.”

World history was made in Akron on a chilly night in September 1927.

Technically, world history was made over Akron.

New York announcer Graham McNamee (1888-1942), the most famous personality in early radio, became the first man to broadcast from an airship. 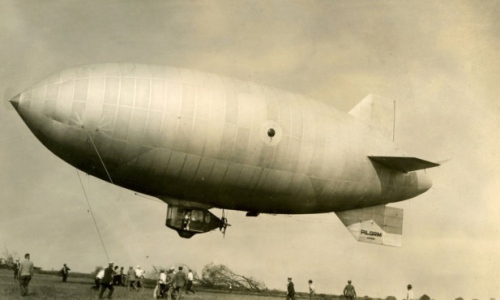 The Pilgrim, Goodyear’s first commercial, helium-filled airship, was 110 feet long and 32 feet in diameter with a gas capacity of 56,000 cubic feet. It debuted in 1925.
(Beacon Journal file photo)

The exciting stunt was sponsored by the Akron Times-Press and Goodyear Tire & Rubber Co. in conjunction with the second annual Akron Radio Show at the Akron Armory.

Radio buffs were invited to the show Sept. 21-24 to inspect the latest receiving sets, loudspeakers, power units, batteries, eliminators and other accessories “amid a gorgeous setting of stately columns, flowers and other attractive decorations.” Admission cost 35 cents and included musical entertainment by tenor Allen McQuhae, the Ina Arnold Chamberlin Banjo Band, the Blue Room Singers and the Shades of Moses Cleveland Quartet.

Radio was still in its formative years in Akron. The city’s first licensed radio station, WOE, went on the air in 1922 but signed off in 1923. Akron’s second radio station, WADC, arrived in 1925.

Visitors to the Akron Radio Show could ooh and ahh over the latest receivers, including the Kolster Model 6-D, the Sparton Model 6-26, the Bosch Cruiser, the King Crusader, the Crosley Bandbox, the Atwater Kent Model 33 and the Freshman Equaphase G-3.

The Sept. 22 fight was piped over loudspeakers at the Akron Armory, where more than 3,000 hung on every word and cheered as if they were sitting at ringside.

McNamee’s blow-by-blow account proved to be so exhilarating that one woman had to get up and leave.

“I can’t stand it any longer,” she told the Times-Press. “The men folks can stay, but it’s too much for me.”

Paul Heasley, sales manager at Buckeye Radio Service, was the brains behind the broadcast from the Goodyear blimp Pilgrim. In less than 24 hours, he built, tested and installed a short-wave transmitter aboard the airship and set up a short-wave receiver in the armory. If all went as planned, the five-watt signal would then be relayed to WADC radio for a wider audience. 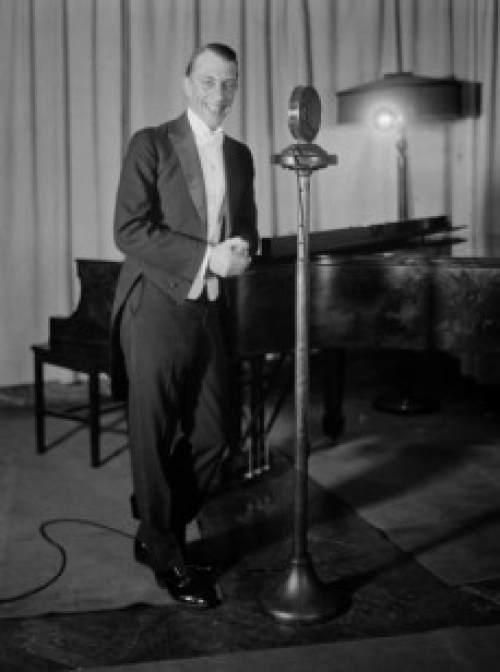 Radio announcer Graham McNamee (1888-1942) made world history over Akron on Sept. 23, 1927, as the first man to broadcast from an airship.
(Library of Congress)

McNamee, 39, received a cheery reception at the armory Friday evening, Sept. 23, chatting with fans about the boxing match in which Tunney retained his title. After a few hours, the announcer was whisked by automobile to the hangar at Wingfoot Lake in Suffield Township for his first ride aboard a blimp.

Veteran pilot Carl Wollam served as McNamee’s captain on the Pilgrim, Goodyear’s first helium-filled commercial airship. The silver blimp was 110 feet long and 32 feet in diameter, with a gas capacity of 56,000 cubic feet. Its enclosed gondola, finished in velour with polished aluminum and nickel, had room for one pilot and two passengers.

Shortly after 10 p.m., the Pilgrim disappeared into the night.

From the southeast, a droning engine puttered through the sky toward Akron. Radio owners listened intently, waiting to hear one of the most recognizable voices on radio.

Suddenly, the signal arrived — faint at first, but growing stronger.

“Good evening, ladies and gentlemen of the radio audience,” the announcer said. “This is Graham McNamee.

“I am aboard the Goodyear blimp Pilgrim and we are flying over the city of Akron.”

Engineers cheered at the armory and patted each other on the back. The futuristic broadcast, which lasted no more than 20 minutes, must have sounded to WADC listeners like something out of a Jules Verne or H.G. Wells tale.

A man in the sky was talking to them!

“The voice from the clouds seemed eerie — a disembodied spirit,” the Times-Press reported. “But it came in. … The great announcer’s voice told of watching the city as it lay beneath him. Lights blinking, signs flashing, streaks of light and shadow to mark the streets. The row of lamps that marked North Hill Viaduct.”

It was a perspective that lifelong Akron residents could only imagine.

After circling overhead, Wollam set a return course for Wingfoot Lake and the announcer signed off.

“This is Graham McNamee speaking. Good night, all.”

A crowd of 100 greeted the two at the hangar to congratulate them on their historic feat.

The next afternoon, McNamee returned to the armory to meet fans and talk about his adventure.

Akron hadn’t heard the last of McNamee. He returned to broadcast the All-American Soap Box Derby in 1935, the first year the national competition was held in Akron.

Quite by accident, the announcer elevated the derby’s profile.

Champion Maurice Bale Jr. of Anderson, Ind., lost control of his car and plowed into McNamee while he was broadcasting live at the bottom of the Tallmadge Avenue hill.

A wobbly McNamee continued to announce the race, but suffered head and spinal injuries and spent two weeks at City Hospital.

The bizarre crash became a national story and catapulted the Soap Box Derby into the public consciousness. With the unexpected publicity, Akron’s fledgling race became an American institution.

“For 13 years, I have taken chances while broadcasting in airplanes, atop skyscrapers, in speeding autos and dozens of other ways — and then I’m knocked for a loop by a 14-year-old kid,” McNamee joked from his hospital bed.

Beacon Journal copy editor Mark J. Price is the author of The Rest Is History: True Tales From Akron’s Vibrant Past, a book from the University of Akron Press.