JLENS, the Military Surveillance Airship, Is Ready for Action

Posted on July 29, 2013 by LighterThanAirSociety 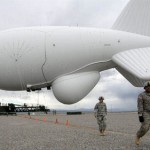 Surveillance aerostat JLENS complete its training program and could enter active service within a year.

A year from now, two stark white aerostats will hover over Washington, D.C., a pair of eyes in the sky to detect incoming threats. After eight years in development, two early user tests, and $2.7 billion, JLENS, the abbreviated title (thankfully) of the Joint Land Attack Cruise Missile Defense Elevated Netted Sensor System, is ready for deployment.

“We’re transitioning from a development program to an actual program where the users are coming in and operating the system,” JLENS program director Doug Burgess said during a press conference Wednesday morning. “[We’re] getting away from the PhD engineer types running the system to the 20- or 25-year-old soldier running the system.” 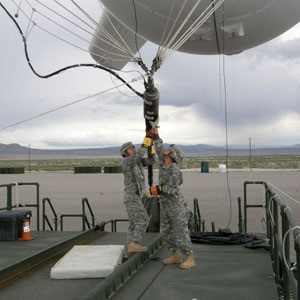 Defense giant Raytheon designed JLENS as a cost-effective surveillance system that could keep watch for hostile targets such as terrain-hugging cruise missiles, ballistic missiles, swarming boats, and unmanned aircraft. Popular Mechanics covered the project last August before JLENS moved into its first wave of early user testing in the fall. Following six weeks of testing in May and June, one hundred U.S. Army soldiers have been trained on the JLENS system and will travel with the aerostat.

“I was very impressed with some of the young lieutenants on their knowledge and ability to operate a very sophisticated system.” Burgess says. “Their adaptation to it based on their experience with video games and Xbox helped them to relate to this very sophisticated radar operation system.” 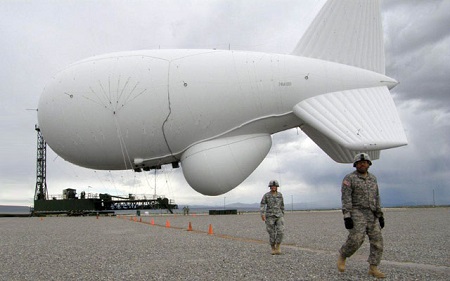 A JLENS aerostat at its mooring mast during tests/training.
Photo: Popular Mechanics

This system is a little more complicated than a quick match of Call of Duty or Battlefield 3, however. JLENS has four main components: aerostats, radars, mooring stations, and a processing station. The aerostats are the unmanned blimps. Each stretches 242 feet long and nearly as wide, and is tethered to mooring stations. The two aerostats work as a pair (called an orbit) and fly at an altitude of 10,000 feet. One aerostat carries a surveillance radar that offers over-the-horizon, 24-hour, 360-degree surveillance up to 340 miles in any direction. The second blimp houses a fire-control radar, which signals interceptors to an incoming threat and works with Patriot missiles and Standard Missile-6.

The main advantage of JLENS, Raytheon says, is cost. Fixed-wing surveillance planes such as E-3 AWACS, E-8 JSTARS, or E-2Cs could perform many of the same operations, but Raytheon estimates that JLENS is seven times cheaper because of maintenance, manpower, and fuel costs.

JLENS currently has two two-blimp orbits, with one complete orbit currently stationed at a training and test range in Salt Lake City. The aerostats and accompanying technical equipment will travel to Aberdeen Proving Ground in Maryland, where the system will be set up, and the team will perform initial evaluation before its official operations in the capital. In the future, JLENS could be deployed to protect the Navy and military movements in strategic waterways and also provide earlier detection and tracking of incoming missiles in foreign engagements.

“We’re proving blimps can see more than just the 50-yard line.” Burgess says. “We really feel like we’re at the point now—development is complete—and the system is ready to be deployed wherever it’s needed.” 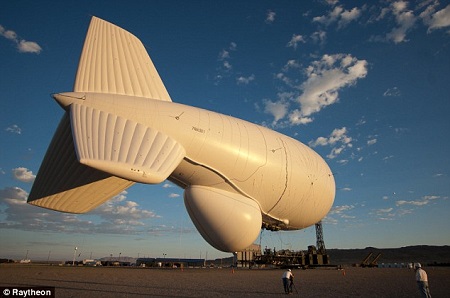 Eye in the sky: The JLENS blimp uses radar to monitor a 340 miles radius around the spit where it is deployed. The complex radar can see well beyond the horizon.
Photo: Raytheon/Daily Mail 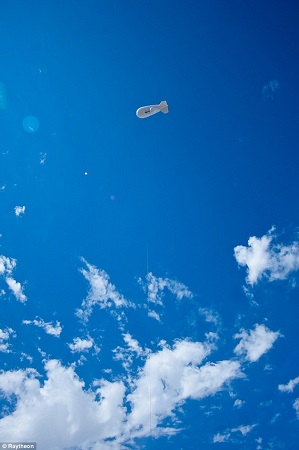 The blimps can stay aloft for nearly 30 days at a time, monitoring the world below 24 hours a day seven days a week.
Photo: Raytheon/Daily Mail 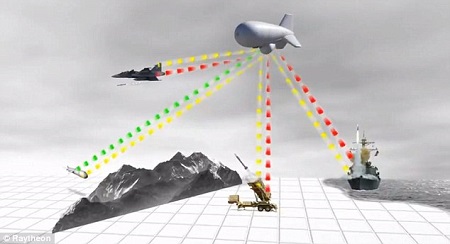 The JLENS blimps are outfitted with fire control radar that can communicate with missile launchers on the ground, at sea or in the air to help guide missiles in to intercept incoming targets.
Photo: Raytheon/Daily Mail 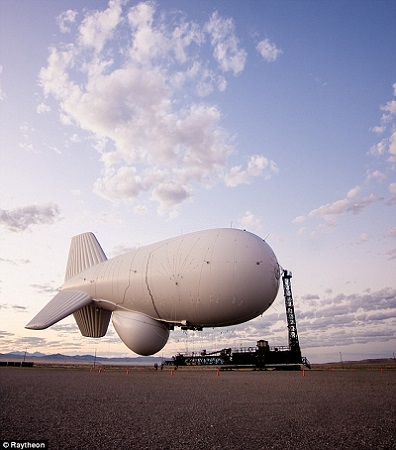 Raytheon, the defense contractor that made and developed the JLENS system, said the blimps can be operated for one fifth the cost of other aerial radar systems – like planes, drones and helicopters.
Photo: Raytheon/Daily Mail 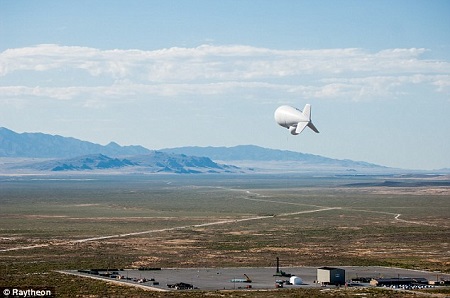 The helium blimps are sent 10,000 feet into the air and then tethered to the ground.
Photo: Raytheon/Daily Mail 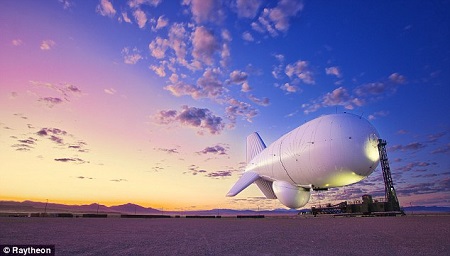 The blimp endured several successful tests in the Utah desert. The next stop is Aberdeen Proving Ground in Maryland, outside Washington, DC.
Photo: Raytheon/Daily Mail

This entry was posted in Uncategorized and tagged JLENS, raytheon, surveillance blimp. Bookmark the permalink.